A commercial rabbit meat farm in the state’s east is under investigation for allegations of cruelty after undercover footage surfaced showing live, caged rabbits with facial injuries and missing limbs.

The footage, seen by The Age, allegedly shows a live rabbit at Southern Farmed Rabbits in Gippsland being thrown into a bin of carcasses as another lies dead on the ground. Others appear to be suffering from open wounds and exposed bones. 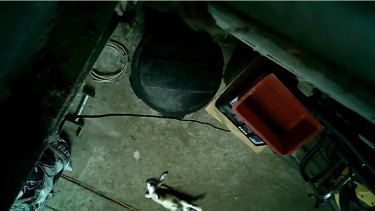 Covert images and footage supplied by Animal Liberation of a rabbit factory farm in the state’s east.

The farm’s owner and his animals – the rabbits bound for boutique butchers and restaurants across the country – are the subject of an investigation by regulatory body Agriculture Victoria after a whistleblower alerted animal welfare advocates to the alleged activity in recent months.

On Thursday, Animal Justice Party member Andy Meddick will also move to have the business outlawed, presenting a bill to Parliament to ban the factory farming of rabbits.

Mr Meddick said the vast majority of commercially farmed rabbits in Australia were the same breed as those people adopted and kept as household pets. He said the footage, released by Animal Liberation, was some of the worst he’d seen.

“Rabbits are gentle and docile animals. The very same breed many of us share our homes with are being exploited in some of the worst ways imaginable,” Mr Meddick said.

“I have lodged a complaint with Agriculture Victoria and the Minister for Agriculture asking them to urgently act on the alleged breaches documented in this investigation. Cruelty should not go unpunished.”

Southern Farmed Rabbits owner-operator Shane Moodie said he was aware of the investigation but denied any systemic cruelty had taken place at his family’s farm. He said his animals were cared for and his breeding stock even given names.

Mr Moodie said one rabbit seen in the undercover footage, named Phil, was being treated for his facial disease and, while he admits he should have euthanised the animal earlier, the farmer said he’d grown attached to the six-year-old buck. 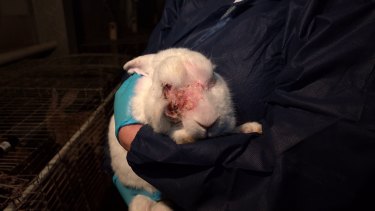 Shane Moodie said he named most of his breeding stock, including six-year-old Phil who was being treated for his facial issues. He’s since been euthanised.

Others, he said, had sustained injuries during fights. Many of those captured on the footage, including Phil, had been euthanised in recent weeks.

“It was an oversight because of my attachment to him. But he wasn’t in any pain,” Mr Moodie said. “The allegations [of animal cruelty] are unsubstantiated.”

A Rural Industries Research and Development Corporation’s five-year forecast report released in 2014 found the country’s rabbit industry had an annual turnover of about $3.1 million.

It found demand for the product was good but due to disease and welfare issues the industry had “negative growth prospects”. 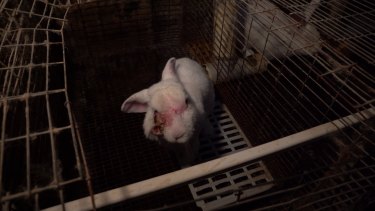 Footage from inside the Gippsland rabbit farm which has been supplied to Agriculture Victoria.

Mr Moodie said he welcomed increased oversight in the industry and visits from the department whenever it wished. He pledged to work towards achieving best practice at his farm in the future. He said demand for the product across Australia remained high.

“How can the public have any confidence in government and regulators when the only time the public becomes aware of these atrocities is from the work by animal protection organisations, whistleblowers and members of the public, rather than the agencies who are tasked with upholding laws intended to protect animals from cruelty and abuse?” Mr Osborne said.

Agriculture Victoria confirmed it had undertaken an investigation into the allegations.

Young opossums cling to mummy as they cross the road

Zeldin out-raises Gov. Cuomo as donations dry up amid scandals