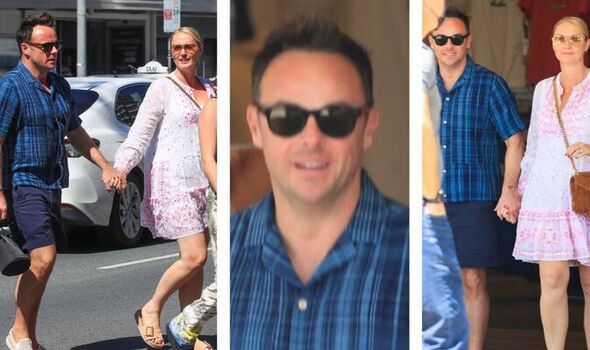 Ant McPartlin and wife Anne-Marie are now Down Under

Ant McPartlin and his wife are fending off the autumnal chill in Australia and, as thermostats plummet in Britain, they are believed to be enjoying temperatures of up to 30 degrees C.

Ant McPartlin, 46, and his wife Anne-Marie Corbett, also 46, were spotted enjoying a romantic lunch together on Australia’s Gold Coast.

However, his close pal and co-host Declan Donnelly, 47, was notably nowhere to be seen.

Earlier this year, Dec suffered a horrifying summer when his older brother and priest, Father Dermott, collapsed and died aged 55, the same month that he welcomed a new baby boy with wife Ali Astall – but despite the tragedy, he will be moving forward with fronting I’m A Celebrity 2022 alongside Ant.

Meanwhile, Anne-Marie, who has worked alongside Ali in the talent management business, enjoyed a sunny stroll Down Under with her beau.

The pair, who will be in Oz for the next month, checked out a surf shop before their romantic meal by Coolangatta Beach.

Ant McPartlin is soaking up the sun in Queensland, surrounded by beaches that are home to dolphins and migrating whales, as he awaits the start of filming for I’m A Celeb.

Anne-Marie Corbett donned a floaty white and pink dress that looked perfect for the weather, and paired it with backless sandals and a brown suede fringed bag for the ultimate boho chic look.

Ant McPartlin and his beloved co-host Declan Donnelly have often been inseparable, having first met on the set of Byker Grove when they were just 13 years old – and now, a string of award-winning shows later, they still present together. However, Ant’s TV partner was nowhere to be seen during his last stroll with Anne-Marie.

Ant McPartlin and Dec Donnelly will be kicking off on British TV screens in less than two weeks time, after the launch date was officially confirmed by ITV as November 6. An additional 2023 All Stars edition is believed to have already been scheduled for South Africa.

Ant McPartlin and Dec Donnelly published Instagram footage showing them getting strapped into their safety gear, ready to show the world a skydiving stunt, while they promised they would be back in the jungle for new shows soon.