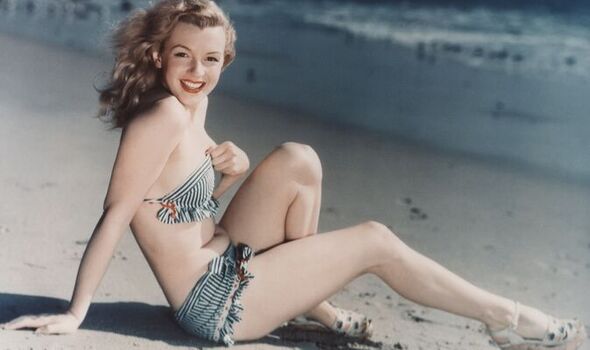 Her voluptious curves hidden beneath a long white embroidered lace gown and a large floral bouquet, the bride wore a hopeful smile that barely concealed her innocence. “I didn’t know anything about marriage, especially the sex part of it,” she later confessed. She had just turned 16 and would go on to become a movie star, global sex symbol and tragic Hollywood cautionary tale.

But before she became Marilyn Monroe she was Norma Jeane Baker and 80 years ago, on June 19, 1942, married her sweetheart, 21-year-old James Dougherty.

But her first marriage, before she found fame, had a profound influence on the star who died of a drug overdose – some suspect it was murder – in 1962, aged 36.

If they had stayed married and she had escaped Hollywood’s clutches, she might have lived into old age, Dougherty believed.

Marilyn was only 15 when she met 20-yearold Jim Dougherty, who lived opposite her in the Los Angeles suburb of Van Nuys.

They attended the same high school and he often gave her rides home in his car.

“I noticed she was a pretty little thing and she thought I looked angelic in white shirts, but she was only a child as far as I was concerned,” he said.

“Five years was a great difference in our ages. I thought she was awful young, but I took her to a dance. We talked and we got on pretty good.”

Marilyn thought him a “dreamboat” and a prize catch: a high school sports star, amateur actor and student body president, he turned down an athletic scholarship at university to work instead at Lockheed Aircraft.

Dougherty offered Marilyn the love and security she had lacked in her troubled young life. Born Norma Jeane Mortenson, she had been shuffled through foster homes and orphanages after her mother’s schizophrenia rendered her incapable of parenting.

“I didn’t like the world around me because it was kind of grim,” Marilyn confessed.

At 15 she was in the care of foster parents Grace Goddard and her husband, when they decided to relocate to West Virginia.

Legally barred from leaving California, Marilyn seemed doomed to return to the orphanage she loathed.

Dougherty, romancing her since January 1942, came to her rescue, marrying Norma Jeane barely two weeks after her 16th birthday.

“They were gonna put me in a home, or I could marry this boy who was 21 at the time,” recalled Marilyn. “So I married.” But it was more than a marriage of convenience, insisted

Dougherty: “We were in love.” Marilyn dropped out of school, put away her childhood doll collection, and threw herself into her wifely duties, making a home and learning to cook.

She spoke of often making peas and carrots because she liked the colours. Marilyn chose all their furniture, plates and cutlery, nurtured potted plants and adopted a Collie dog she named Muggsie.

But two years after after tying the knot, Dougherty joined the Merchant Navy and the newlyweds moved to Catalina Island, 22 miles off the Los Angeles coast, where they shared an idyllic wartime retreat by the beach. She joined him on fishing and hunting trips and they danced together at the casino.

“She loved it over there,” he said. “It was like being on honeymoon for a year.”

Dougherty confirmed that she was a virgin when they wed, but claimed Marilyn quickly came to relish their love-making. “We loved each other madly,” he said. “I felt like I was the luckiest guy in the world.”

Dougherty wanted a family but asked her to wait, admitting: “I knew how desperately she wanted a baby.”

Schani Krug, who produced the 2004 documentary Marilyn’s Man, says: “When he discovered Marilyn at the age of 15 she was rough around the edges.

“She was pretty much a tomboy. Jim really feminised her, took her everywhere with him and showed her the world.

“He was a bon vivant, great sense of humour, and he brought that out in her, really refined her, even kind of showed her how to walk and be sexy.”

But wedded bliss was shortlived. Despite Dougherty’s domestic contentment, Marilyn longed for excitement. “My marriage didn’t make me sad, but it didn’t make me happy, either,” she said.

“My husband and I hardly spoke to each other. This wasn’t because we were angry. We had nothing to say. I was dying of boredom.”

For all this, it was the Second World War that really tore the newlyweds apart.

In 1944, Dougherty sailed to the Pacific and Southeast Asia, leaving his teenage wife with his parents. Against their wishes she began modelling, which perplexed her absent husband.

Inspired by early modelling success, Marilyn took a screen test at 20th Century Fox studio, which agreed to sign her – but only if she was single.

“She wanted to sign a contract with Fox and it said she couldn’t be married,” said Dougherty. “They didn’t want a pregnant starlet. I tried to talk her out of it.”

But Marilyn insisted she could have her cake and eat it: divorce her husband but stay together as a loving couple.

“She just thought she could get this divorce, we’d go on as before,” said Dougherty. “She could have a career and we could have everything the same. I said: ‘It doesn’t work that way’. I wanted a family and I didn’t want to be Mr Monroe.”

Despite Dougherty’s protestations she pressed ahead with a divorce, severing ties in 1946 after only four years together. “I was on a ship in the Yangtze river getting ready to go into Shanghai when I was served with divorce papers,” he recalled.

In Hollywood, Norma Jeane adopted her mother’s maiden name Monroe, and Fox added “Marilyn”. Dougherty’s fears proved well founded. Her career took off with small movie roles and 1950 hits All About Eve and The Asphalt Jungle earned her a sevenyear Fox contract.

Dougherty was left behind in her dust, as she became a different woman. “I never knew Marilyn Monroe,” he said. “I knew and loved Norma Jeane. She was kind of a lost soul. Norma Jeane was reserved, religious and devout. The soft part carried over to Marilyn and that’s what hurt her. She was too young and wasn’t ready for being a star, and was eaten up by the system.”

They never met again, due largely to the possessive jealousy of Dougherty’s second wife Patricia, who he wed in 1947.

Ironically, Dougherty was friends with Jack Clemmons, the first officer on the scene when Marilyn died in August 1962.

To his grave, he believed Hollywood had killed Norma Jeane.

“Fame was injurious to her,” he said. “She was too gentle to be an actress. She wasn’t tough enough for Hollywood.”