As part of their Netflix docuseries, which covers their love story, the royals discussed the moment Harry got down on one knee in the grounds of Kensington Palace – and even shared a photo of the romantic moment.

WATCH: Prince Harry pictured down on one knee in new proposal photo

“I wanted to do it earlier. Because I had to ask permission from my grandmother, I couldn’t do it outside of the UK,” he began. “I did pop a bottle of champagne while she was roasting a chicken and that kind of slightly gave the game away.

“She was like, ‘You never drink champagne, what’s the occasion?’ And I was like, ‘I don’t know, I just had it like, lying around, whatever,'” Harry joked, and Meghan laughed: “It was a magnum!”

IN CASE YOU MISSED: 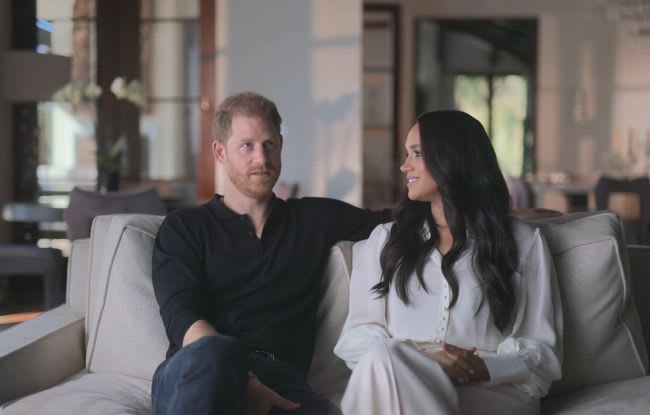 The Duke and Duchess opened up about their proposal in their new Netflix documentary, Harry & Meghan

He then set up a secret picnic blanket outside surrounded by electric candles and white flowers. Although he warned Meghan “not to peek” while he prepared the proposal location, a clip showed the former Suits actress excitedly whispering to her friend over the phone: “Oh my God, Jess. It’s happening!”

“In the little walled garden, overlooked by the staff flats, I got 15 of those electric candles,” Harry explained. A photo showed the royal on one knee holding a ring box in one hand, which we now know contained a custom ring featuring diamonds from his late mother Princess Diana’s collection.

The royals posed for engagement photos at Kensington Palace

With his other hand, he held onto Meghan’s pet dog Guy after the pup was flown from America to the UK to live with the couple at their then-home Nottingham Cottage.

“It wasn’t that I knew she’d say yes, but she’d already moved Guy over so I had Guy as a hostage. And he was in stilts so he couldn’t run away,” he quipped, with a green jacket-clad Meghan leaning in for a selfie with Harry and her pooch following their engagement. 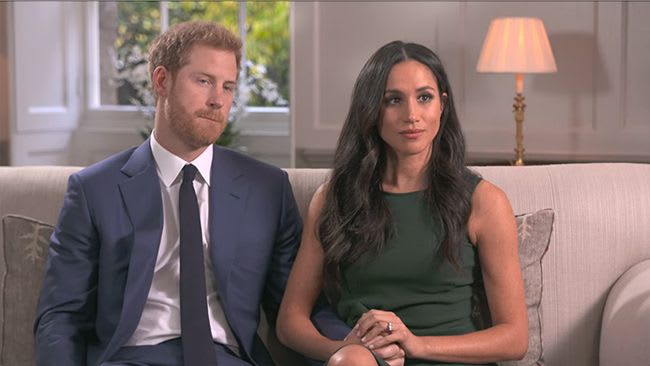 Harry and Meghan previously told the press in their engagement interview that he had popped the question while they were cooking at home, leaving many believing that the Duke surprised his now-wife in the kitchen.

They went on to host a private engagement party where they dressed in penguin onesies, before posing for official photos in Kensington Palace’s Sunken Garden, where Meghan showed off her new sparkling trilogy ring.

DISCOVER NEXT: Meghan Markle and Prince Harry’s relationship timeline: from their first date to baby Lilibet