Tales of a divided US usually involve Democrats and Republicans, racial conflicts and the Boston Red Sox and New York Yankees, not Serena Williams in custom Balenciaga and rapper Saucy Santana booty clapping in a catsuit from The Blonds.

Conversation in the front row at Michael Kors and as far back as the standing room section at Dion Lee flitted between crime, grubby subway encounters and staggering inflation to the potential sale of Tom Ford’s business for a rumoured $US3 billion against a backdrop of the immaculately groomed and impossibly thin. 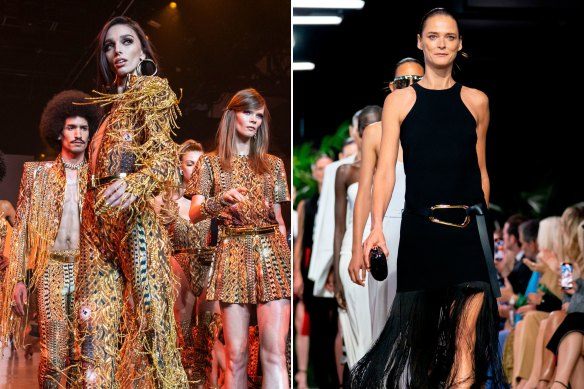 Downtown vs Uptown girls and boys. The Blonds and Michael Kors at New York Fashion Week.Credit:AP

Fashion has always had a troubled relationship with reality, but this season it felt particularly fractious.

Kors closed glass doors on the outside world, with a collection for women who only need to worry about keeping white boxy blazers worn over gold sequinned skirts and black blouses in pristine condition.

The polish, precision and glamour recalled the spirit of optimism that once ran the length of Madison Avenue.

“The magic of New York is back,” said pioneering influencer Bryanboy (Bryan Grey Yambao), fresh from rubbing shoulders with Nicky Hilton Rothschild and Real Housewife Lisa Rinna in the front row. “New York opened with a bang with Fendi and there are so many European designers here.”

“I am obsessed with the optimism we saw at Tommy Hilfiger, even in the rain. It’s just a joyous season and the New York designers are really bringing the best. It’s like the whole world is descending on New York and that’s a great thing.”

Others frantically echoed Yambao’s positive spin, willing the week to rediscover the city’s mojo that seems to have caught the 5 train to Brooklyn or further afield.

Tommy Hilfiger embodied that determined optimism, with his show proceeding despite rain, featuring an inspired collaboration with British designer Richard Quinn. Taking his bow before a solo by Blink 182 drummer Travis Barker, Hilfiger smiled and seemed untouched and unaware of the teeming clouds, proving that weather is a low priority in his fashion empire.

Quinn’s pieces, however, hinted at the sharper edges of the city emerging on the Lower East Side, with punk leather jackets and tartan prints accessorised with leather whips.

Darker clouds rolled in harder and faster at Stuart Vevers show for Coach, which began with a romantic couple in beige basics wooing each other on a set resembling a pier, before the idyll was shattered by downtown baby doll dresses, ’70s style tunics and leather shorts with vests, as worn by Lil Nas X. 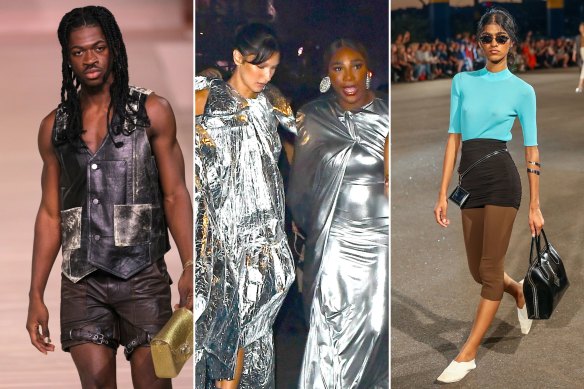 The pieces felt grounded in the tumultuous reality of the city, with a vintage spirit reflecting the rise of secondhand stores in neighbourhoods once dominated by luxury brands, Along with luxury reseller The Real Real, boutiques such as The Vintage Twin and Assembly that offer ’80s band T-shirts, well-worn Levi’s and lurid tracksuit tops. 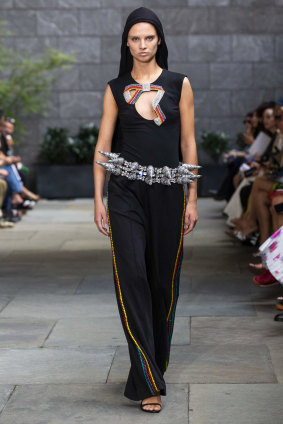 Surprisingly Upper East Side staple Tory Burch also brought youthful energy and as much urban grit as her brand would allow into the styling of sheer fitted tops worn over the finest black mesh skirts, black mini skirts with lime green zip tops and beige tights.

The unusual combinations felt relevant to shoppers looking for the individuality that vintage provides, without leftover aromas from previous owners.

“This collection is personal and intuitive, drawing on my memories of the ’90s when I moved to New York,” Burch said. “I wanted to look at my signatures with a fresh perspective, reflecting what feels modern now.”

After The Coach show Lil Nas X changed to appear at Vogue World, a commercial activation moving the brand further away from its print origins. Consumers and advertisers purchased tickets to see Serena Williams in Balenciaga and 200 models who don’t get out of bed for far more than Linda Evangelista’s former $10,000 fee.

“We wanted it to reflect the heart of the city and of a great fashion capital,” Wintour said,

The World part of the title shows that it wasn’t just for New York, with the event designed for the digital space, with potential to generate excitement equal to the annual Met Gala extravaganza.

“It was a great edit that featured all the friends of the brand, and it felt like a fantastic consumer experience,” McCann said. “Certainly, our audiences in Australia engaged with it. It was a really positive event.”

“This will in theory travel and there’s no reason why it couldn’t come to Australia.”

Other Australians were present with Daniel Avakian delivering his vision of the metaverse and IMG Australia bringing Liandra Gaykamangu of Liandra Swim to test US waters.

“It takes time to break New York,” says Natalie Xenita, managing director of IMG Fashion Events in Australia. IMG owns both New York and Australian Fashion Weeks. “The connection is strong. People don’t realise that the fashion week site owned by IMG is devoted to New York for six months and Australia for six months. That’s a relationship that works both ways.”

Area and The Blonds delivered shows that felt aspirational and exciting, for consumers aware of the changes on the city’s streets.

As muse Daphne Guinness, nightclub denizen Amanda Lepore and former America’s Next Top Model judge Nigel Barker listened to Saucy Santana close the show, the crowd whooped. Here were clothes to wear that night to party until the lights in New York come on, or go out.

46 Best Christmas gifts for teenagers 2021, including last-minute ideas | The Sun