Queen Camilla: Hint of sign Duchess would get title

Queen Camilla and King Charles arrived in Wales this morning and visited St Llandaff Cathedral in Cardiff. They will then head to Cardiff Castle where they will be greeted by crowds, both well-wishers and anti-monarchists. For the occasion, Camilla wore a brooch with a clear nod to Wales.

Queen Camilla donned an all-black outfit today in keeping with the mourning tradition – where every member of the Royal Family must wear black for a week following a monarch’s death.

But the Queen Consort’s accessories stood out: she wore a silver brooch depicting the shape of a leek.

The leek is a national symbol of Wales and, therefore, acts as a tribute to the nation and its people.

Camilla also donned a pair of pearl earrings in honour of the late Queen, who was rarely seen without her three-stranded pearl necklace and pearl earrings. 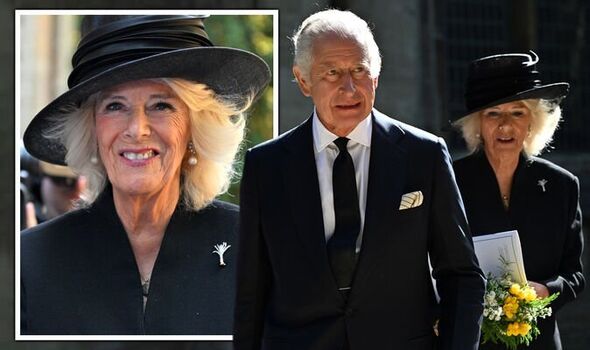 The earrings are a pair Camilla often wears, featuring a pearl drop from a cubic zirconia.

Interestingly, they are a clip-on pair as the Queen Consort has never had her ears pierced. Speaking to British Vogue earlier this year, she said: “You know the nice thing about being a grandmother is that you can spoil them occasionally, give them more of the things that their parents forbid them to have.

“The girls are beginning to get into clothes and make-up and, you know, it’s rather frightening when you see them, coming out with pierced ears and a lot of new make-up and funny coloured hair and stuff.

“[The grandchildren] will try to persuade me, but nothing’s going to pierce my ears,” she added.

Camilla completed her look with a black, wide-brimmed hat with a silk ribbon around its centre.

She looked elegant as she entered the St Llandaff Cathedral in Cardiff with Charles.

The couple will continue to Cardiff Castle, where royal fans have been waiting for them since last night.

Anti-monarchy protesters will also be waiting, backed by former Senedd Member for Plaid Cymru Bethan Sayed, who said: “As soon as King Charles III decided to announce that Prince William should become Prince of Wales, so soon after the death of the Queen, many of us felt compelled to respond.

“We must discuss the future of Wales, and what we want that to look like.

“It is about fairness, equality, and the Wales we want to shape for future generations.”

Before arriving at the Castle, the new King will meet with Welsh First Minister Mark Drakeford at the Senedd, where he will listen to tributes and condolences from Welsh politicians to the Queen.

Following the visit to Cardiff Castle, Charles will attend a reception hosted by the Welsh Government.

He will then make the trip back to London, leading a meeting of faith leaders in Buckingham Palace’s Bow Room.

The Queen’s coffin rested for one night in the Bow Room, ahead of its transportation to Westminster Hall on Wednesday.

The coffin arrived from Edinburgh to London on Tuesday night, and was taken to the Palace ahead of the procession on Wednesday afternoon, led by the King.

Sagittarius horoscope: What your star sign has in store for May 2 – 8