Millions predicted to descend on London for Queen's funeral

On Sunday the Queen’s coffin made the journey from Balmoral Castle in Aberdeenshire to the Scottish capital and now will rest at St Giles’ Cathedral until Tuesday afternoon. A special service in honour of the Queen’s life is being held at the landmark, and the Queen’s coffin has been topped with flowers and the Crown of Scotland. 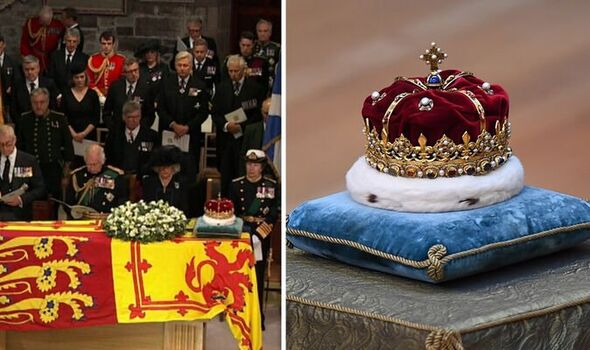 The Crown of Scotland is part of the Honours of Scotland, the oldest regalia in the British Isles.

Created for King James V in the 16th Century, the Crown weighs 1.64kg.

The Honours, comprised of the crown, sword and sceptre, were first used at the coronation of the nine-month-old Mary, Queen of Scots in 1543.

According to the Royal Family website, the Honours were subsequently used “at the coronations of her infant son James VI (and I of England) at Stirling in 1567 and her grandson Charles I in 1633 at the Palace of Holyroodhouse”.

The Crown of Scotland is made from Scottish gold and features 22 gemstones and an array of freshwater pearls found in Scotland’s rivers.