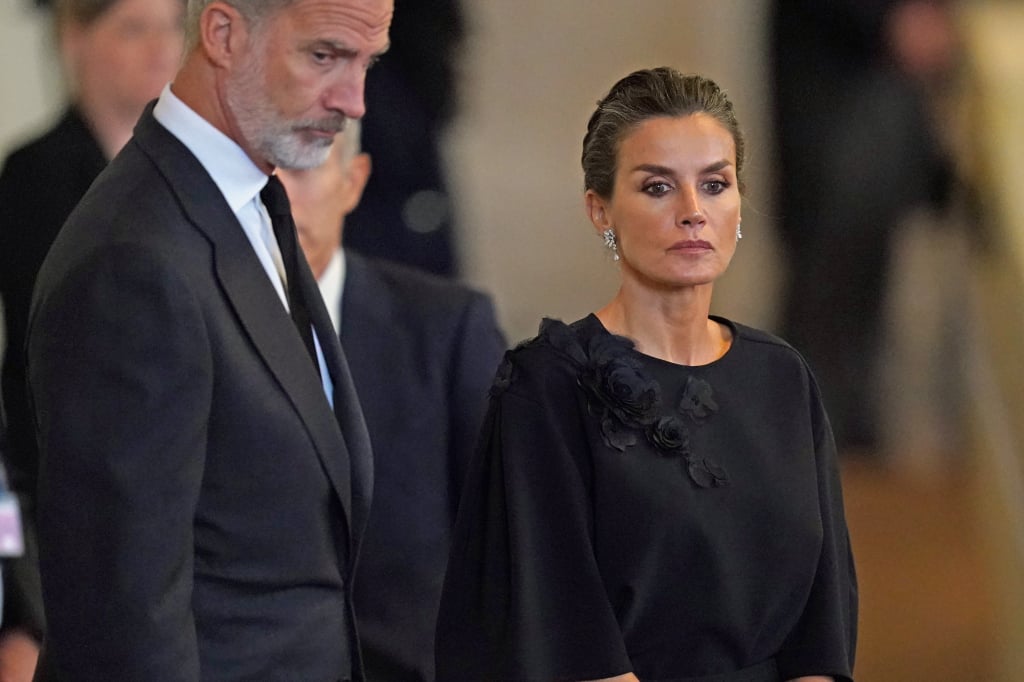 Ten days following Queen Elizabeth II’s death, Queen Letizia honored the late monarch with her all-black attire in London. The Spanish royal joined her husband, King Felipe VI, among 2,000 British and European royals as one of the guests to mourn Queen Elizabeth II on Sept. 19, 2022.

Upon arriving in London, Queen Letizia wore a black Hugo Boss dress completed with a brooch on her chest. The pearl-and-diamond brooch belonged to Queen Ena, also known as Victoria Eugenie, whose British grandmother was Queen Victoria. Queen Ena was known for respecting and carrying out similar customs to Victoria, thereby strengthening the relationship between the Spanish and British crowns. This symbolic piece of jewelry sat perfectly below the classic square-cut neckline of Letizia’s Hugo Boss number, with her hair in a low bun.

To visit the queen lying in state and attend the proceeding reception on Sept. 18, Queen Letizia wore a black Carolina Herrera blouse paired with a simple pencil skirt. The blouse featured floral embellishments at the collar, along with balloon sleeves. To keep the look especially sophisticated, she wore her hair in a low chignon and finished with diamond cluster earrings.

For the state funeral on Monday, Sept. 19, Letizia wore a belted Carolina Herrera midi dress with long sleeves. She accessorized the design with a matching Giorgio Armani clutch, Manolo Blahnik pumps, and black leather gloves. Playing off the streamlined silhouette of the dress, she kept her hair down, with the addition of a headband and veil from Cherubina.

Ahead, get a look at Queen Letizia’s looks throughout the ceremonies and services for Queen Elizabeth II, then see how the British royals paid tribute with their sartorial choices.

15 Fashion and Beauty Brands Giving Back During the Coronavirus Pandemic