The interim pay order issued by the commission on Friday, which could rise when a final decision is made, could also lead to workers in other low-paid sectors such as childcare moving into aged care according to Georgie Dent, executive director of advocacy group The Parenthood. 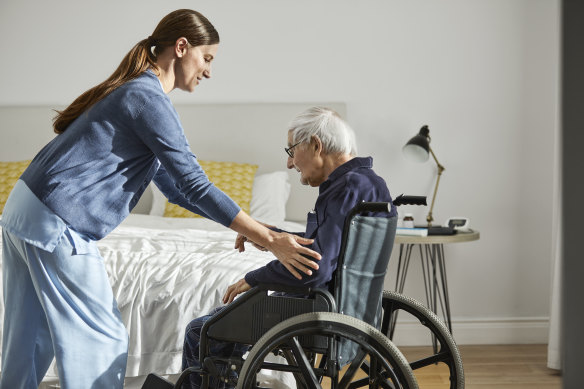 The Fair Work Commission’s decision to award a 15 per cent pay rise will cost an estimated $1.8 billion.Credit:Getty

The federal government backed the case to raise aged care workers’ pay and promised to fund it ahead of the industrial umpire’s landmark ruling last week. The commission is due to hold further hearings later this month to finalise the order, determine the timing and decide how to phase it in.

Impact Economics’ Jackson said the $1.8 billion annual cost “will depend on the phasing in of the increase and whether the commission ultimately extends the increase to all workers, including cooks and cleaners, in the aged care workforce”.

“Currently the interim finding only applies to direct care workers, including nurses and personal care workers.”

Jackson’s estimate is in line with Grattan Institute modelling from earlier this year, which estimated the 25 per cent pay rise the Health Services Union had called for would cost about $3 billion annually.

HSU national president Gerard Hayes said last Friday the decision was “moving in the right direction” but the 15 per cent rise was just a down payment on what was needed to fix the aged care staffing crisis.

There are concerns the aged care pay ruling will affect staffing in the childcare sector, where workers are also pushing for a significant pay rise.

Dent said the number of job vacancies in childcare had doubled from just over 3000 places in October 2020 to 7200 now, and that could be exacerbated by the aged care pay bump.

She noted childcare differed from aged care as it was primarily an education profession with a caring component, but “it would be naive to think this wouldn’t have a potentially detrimental impact”.

“With aged care receiving a 15 per cent pay increase, that will be attractive to a lot of people. We have heard of [childcare] centres losing staff to Bunnings as the hours and pay are better,” she said.

Major childcare provider Goodstart Early Learning recently called for an immediate 10 per cent rise in wages for childcare workers to stop them from leaving.

Early Childhood Education Minister Anne Aly said proposed changes to workplace laws, which would give childcare workers the ability to use strike action as a bargaining chip in multi-employer deals, would be crucial in the fight for better pay in that sector.

Under the industrial relations bill that will be debated this week, the Fair Work Commission will be able to force the federal government to take part in multi-employer wage deal negotiations for sectors it heavily funds, including childcare.