Every so often, someone on Twitter recirculates a purported budget created by the website Financial Samurai a few years back for a family of four in New York City making $500,000 and supposedly “scraping by” because the cost of upper-class city living is so high. The responses to this document are always entertaining, running the gamut from “eat the rich” outrage to invocations of memorable satire to the careful debunking of the just-scraping-by claim. (It turns out the family is putting away a bit of money annually, via 401(k) and mortgage payments.) 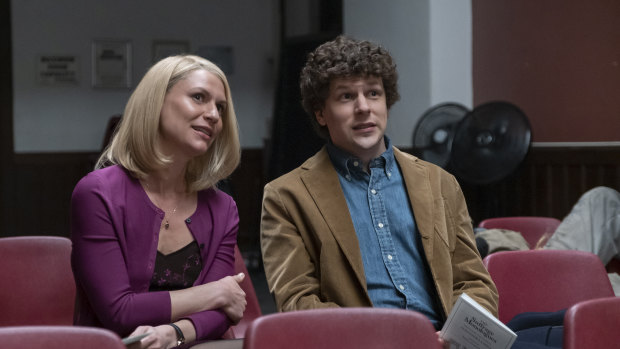 Claire Danes and Jesse Eisenberg in Fleishman Is in Trouble.Credit:Linda Kallerus/FX

That budget kept floating into my mind as I watched the Disney+ serial Fleishman Is in Trouble — a show about divorce and midlife unravelling adapted by my colleague Taffy Brodesser-Akner from her novel of the same name. The show isn’t exclusively about class and money: it’s about marriage and the strange terrain of middle age and dating apps and professional women’s choices and trauma and a lot of other things. (It’s also very specifically and uncomfortably about the ageing of my own late-Gen X/early-Millennial cohort, an effect achieved by the casting of once-precocious actors like Claire Danes, Jesse Eisenberg and Adam Brody.)

But I want to talk (with a few spoilers, fair warning) about the role of money and ambition on the show – the way it illuminates the fine class gradations within the modern meritocracy, the psychology of meritocratic ambition and the crucial, stressful role that marriage plays as a mechanism of social advancement.

That Financial Samurai budget may have been hypothetical, but the privileged angst it tries to illustrate is real enough. In Fleishman Is in Trouble that stress is written on every line of Danes’ character’s face: She’s Rachel Fleishman, an orphaned striver with abandonment fears and intense class consciousness, who marries Eisenberg’s Toby Fleishman, a comfortably upper-middle-class doctor who just wants (or says he just wants) to work with patients and make a comfortable upper-middle-class salary and not be yoked to exhausting ambition.

At his best – which is not his only aspect, to be clear – Toby is what a meritocratic system is supposed to produce: a talented person trained and promoted to a role where his expertise is put to good use, paid appropriately but not extravagantly, and left generally content with his elevated but not too elevated place. But his wife is much more in tune with the deeper and darker ethos of meritocracy: the abiding insecurity that comes with being trained for constant competition and then raised to a position where you’re incredibly privileged and yet your social milieu makes you feel like you’re running and running just to stay in place.

This peculiar feeling can be understood by combining the Financial Samurai budget with a more recent analysis, from a finance Substacker, of how people making hundreds of thousands of dollars annually can get stuck in a strange kind of no man’s land – a territory of privilege but also exhaustion, where you can “see” the world of the truly wealthy, the people with enough money to live off capital income, but you don’t have an obvious path to joining them.

That’s because even though you’re making lots of money, it’s mostly salary income, you’re facing “lifestyle inflation” with kids and home prices and private schools and so forth, the marginal dollar you make gets taxed heavily, and so “your ability to move the net worth range is collapsing”. You may be technically a millionaire, but the money is bound up in your home, every kid is potentially a half-million-dollar college price tag, and all your work goes towards sustaining your current lifestyle. You have the demands of wealth, basically, without its promised sense of security and ease.

One obvious solution is to downshift, to move out of the elite neighbourhoods, to become a doctor in a midsize city instead of a big one or find a suburb with good public schools and relax a little bit. (The show gives us an example in its narrator, Toby’s old friend Libby – played by Lizzy Caplan – a former magazine writer and mother of two now living in New Jersey. But of course, she turns out to have her own overwhelming angst.)

Toby theoretically seems like he should favour some sort of downshifting: He claims to hate all the lifestyle inflation, the more-moneyed friends that Rachel makes, the opulent apartment, the second house in the Hamptons. But he doesn’t seem to have a plan for changing their life, and the most significant sacrifice that he successfully pushed for within their marriage, we learn late in the series, was to forgo having a third child – because, he thought, his wife was too overworked for them to consider having another baby.

And she clearly is overworked and overstressed. But she has a job as a theatre talent agent, which basically requires being in New York. And she wants out of the no-man’s-land predicament, for superficial reasons in Toby’s eyes, but when we understand her a little better, for very human ones: both the desire to reestablish her selfhood after a traumatic entry into motherhood and the fear of downward mobility, the fear that comes from an unstable childhood.

As in the financial-advice narrative, she can see the level up above them through her friends – a place where net worth is clearly higher, capital income is what matters, the wives don’t necessarily work. And she finds a way to move her family towards that position by becoming not just an agent but an insanely successful agent, such that you assume (based on their Hamptons house, if nothing else) that their household surplus is lifting the Fleishmans above the no man’s land of the merely upper class.

Which is to say, really, lifting them above the meritocracy, insofar as the theory of meritocracy in its ideal form doesn’t really have a place for such surplus, since it assumes that fortunes shouldn’t be transmitted but reconstituted, via talent and diligence, in every new generation.

The system’s legitimacy depends on that notional promise – that everyone should have to work for their position, to achieve something extraordinary, to fully earn their place. But the biggest prize in the competition is to escape, at least somewhat, from its punishing demands.

Seeing this dynamic at work in a story of divorce is particularly illuminating, because of the role that so-called assortative mating, the marriage of the mutually credentialled and ambitious, plays in meritocratic upward mobility and competition. These assortative unions help ratify privilege, but they aren’t just a simple medieval-style uniting of family fortunes. The joining involved is more challenging than that because what’s shared initially in meritocratic marriage isn’t existing wealth but potential success. And bringing that potential to fruition while also managing the challenges of divergent career paths, the differences in ambition that may not be manifest at first, the uncertainties of modern gender roles, the hard biological realities of pregnancy and childbirth, is a complex and ongoing negotiation, whose success determines not just your union’s personal happiness but your family firm’s social and financial position.

In general, meritocrats are pretty good at this management. Since the initial 1960s and ’70s-era divorce revolution, which coincided with the emergence of meritocracy, we’ve settled into a pattern where divorce rates are considerably lower for better-educated Americans, where two-parent families are much more the norm at selective colleges than elsewhere, and the marriage gap between the classes is widening.

But Fleishman Is in Trouble is a story of how this negotiation can falter, and maybe fail: how Toby and Rachel’s different attitudes toward ambition and work and money, their different experiences of childbearing and parenthood, their different responses to the stress of professional competition, lead to mutual unhappiness and separation and then a personal crisis that undermines the position they’ve attained.

If you were to imagine a future in which meritocracy wasn’t just under strain but actually collapsing, falling apart and giving way to some entirely different elite-formation system, you might look at the Fleishmans’ story as a harbinger. Because however our version of meritocracy dies, when it does, we should expect, for a little while at least, a lot more upper-class divorce.

This article originally appeared in The New York Times.

Forget Disneyland; You Can Live Out Your Real-Life Rapunzel Fantasies in This Whimsical Cottage

Sandra Bullock: I'm Taking a Step Back From Acting to Be With My Family