A mum-of-two who’s known for sharing clever home hacks with thousands online has shared nine ways to keep vegetables fresh for weeks in the fridge.

Chantel Mila, better known as Mama Mila on TikTok, shared a video demonstrating each tactic – including storing an apple with potatoes to prevent sprouting.

The ‘amazing’ tips will not only minimise food wastage but will save households money on weekly grocery bills. 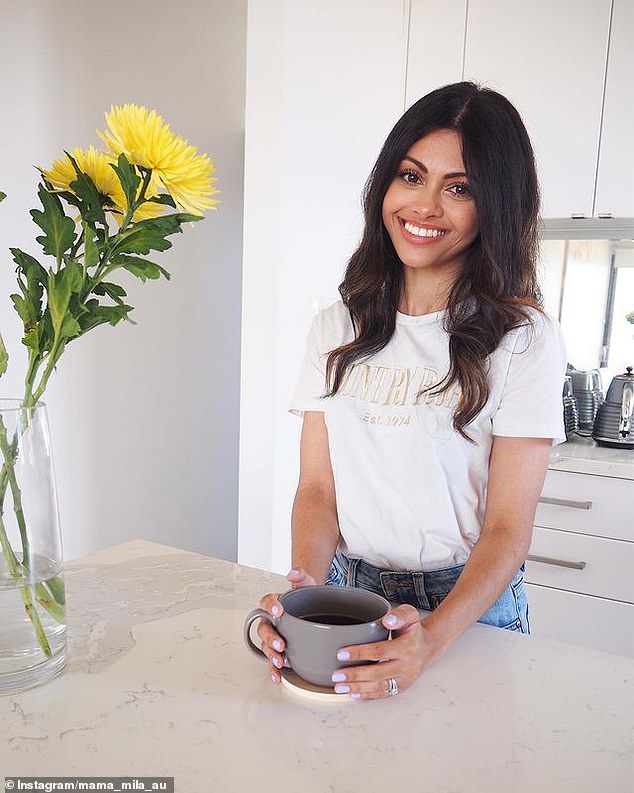 Chantel Mila, better known as Mama Mila on TikTok, (pictured) shared a video demonstrating nine ways to make fresh produce last longer. The ‘amazing’ tips will not only minimise food wastage but will save households money on weekly grocery bills 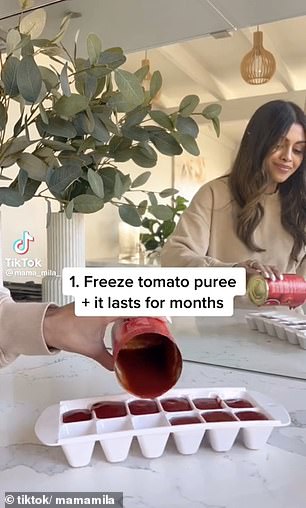 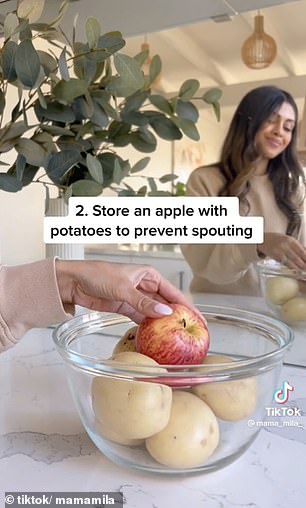 In a TikTok video, Chantel first suggested freezing extra tomato puree in ice cube trays to use as you need when cooking – and claimed it’ll last ‘for months’. She also placed an apple in a bowl of potatoes to prevent sprouting 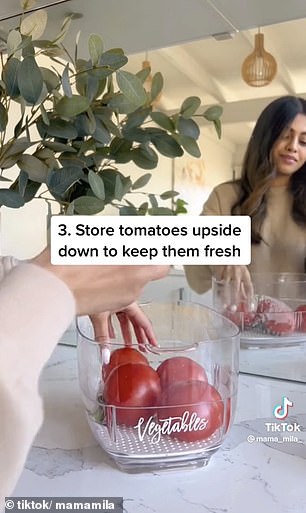 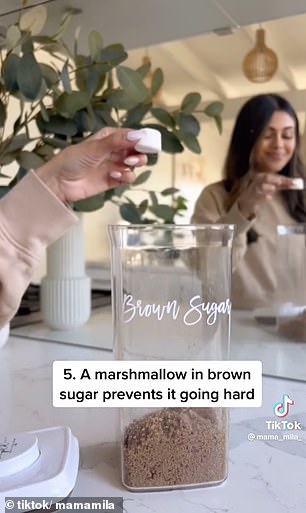 Next, she stored tomatoes with the stem facing down to increase the shelf life and added a marshmallow to a container of brown sugar to keep it soft

In the TikTok video, the Melbourne mum first suggested freezing extra tomato puree in ice cube trays to use as you need when cooking – and claimed it’ll last ‘for months’.

Next, she recommended placing an apple among a group of potatoes to prevent sprouting.

It’s believed the ethlylene gas produced by fresh apples slows the process of sprouting in potatoes, according to Life Hacks.

Chantel also recommended storing tomatoes with the stem down to increase the shelf life.

Moisture from tomatoes can escape through the stem, leaving the produce looking soft.

But turning it upside down can effectively slow down this process and help the tomato remain plump and juicy, according to Serious Eats. 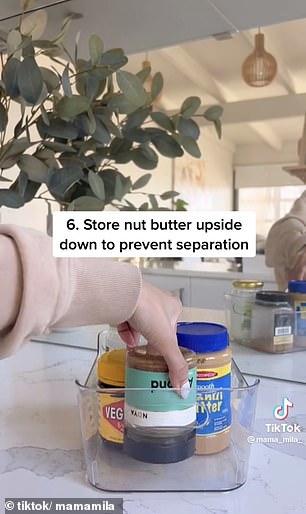 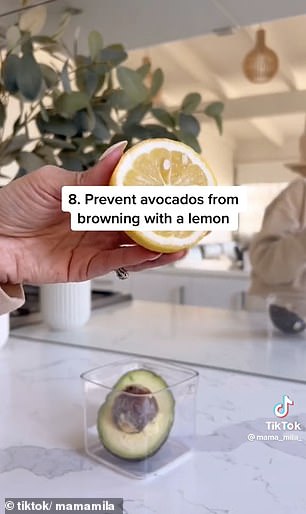 She also suggested storing greens in a container or bowl with a paper towel on top to absorb moisture, and storing nut butter upside down to prevent separation.

Few may know that placing a marshmallow in with brown sugar will prevent it from turning hard, because the marshmallow can help retain moisture.

It’s also commonly known that placing celery in water will keep the vegetable crispy for longer, and herbs can be stored in the same way to prevent wilting.

Chantel then recommended storing avocado halves in the fridge with a sliced lemon to prevent it from browning.

2. Store an apple with your potatoes to prevent spouting

4. Place paper towel on greens to keep them fresher for longer

5. Place a marshmallow in your brown sugar to avoid to going hard

7. Place celery in water to keep it crispy for longer

9. Store herbs in bouquet with water with a plastic bag over the top to prevent wilting

The handy video has since been viewed more than 75,000 times and many praised Chantel for sharing the ‘great ideas’.

‘Taking notes,’ one person wrote in the comments, another added: ‘Okay but how do you know all of these and remember?’

A third noticed Chantel also stored a loaf of bread in the fridge to extend the shelf life and prevent mould from growing.

HOW TO FREEZE YOUR FRESH FRUIT AND VEG 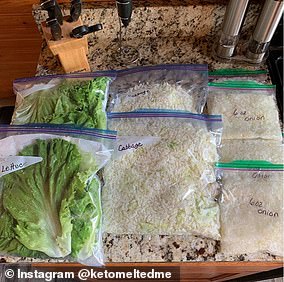 This Instagram user made sure she was prepped with frozen lettuce, onion and cabbage

The majority of vegetables can be frozen, but most will need to be blanched before you do so. This means boiling them quickly for a few minutes before cooling them down straight away in ice-cold water to stop the cooking process. This helps neutralise the bacteria present, which in turn delays the spoilage process.

It’s a good idea to chop up all your veg beforehand, and (if you are able to) freeze them flat on a tray so that they don’t clump together in a chunk of ice, after which you can pop them in freezer packs. If you are limited for space, chop them up and freeze them in small batches instead.

Water-dense vegetables don’t freeze well because water expands and shrinks during the freezing process, so these vegetables will become water-logged and often lose their structure upon defrosting.

If your fruit has any bruises or gashes, carve these away as these can cause your fruit to spoil quicker. Cut into small bite-sized pieces for ease, and try to pat dry/remove as much moisture from your fruit beforehand.

Only freeze fresh fruit and veg, when it’s still at its prime, and wrap your produce well to avoid freezer-burn. Remove as much air from the packs as possible beforehand.

Don’t forget to label as you can – this helps you keep track so that you know when to use up your produce.

Chop/slice your onions before freezing the pieces on a tray (no need to blanch).

These are particularly good in stews, soups, risottos, sauces etc. Anything where the onion doesn’t have to retain its shape too much (e.g. in a salad) is ideal. Lasts up to three months.

This can include vegetables such as spinach, kale and chard. Blanching your vegetables will allow them to be stored up to three months, whereas freezing them fresh will mean they deteriorate quicker.

Note that with leafy greens, you won’t have to boil them for very long in the blanching process.

If freezing fresh, these leafy greens are great in juices. If freezing blanched, you can throw them in soups as well as into your favourite stir-fries.

These are great for when you’re craving some veg on the side of your meal, as well as boiled up and tossed into pasta, noodle, and rice dishes. Lasts between nine and 10 months.

POTATOES AND OTHER ROOT VEG

Cut, blanch and dry thoroughly. Freeze in small batches. The mighty potato will be perfect throw into the majority of your usual favourites, as well as easily boiled and turned into mash.

Other starches work well in pies and casseroles, as well as roasted until crispy. Lasts between 10 – 12 months.

It’s best to peel your apples before freezing (apple crisps are a great way to use them up!) as apple skins are particularly prone to small bruises and marks which can lead to spoilage.

Core and cut into bite-sized chunks and freeze in packs. They work great for the apple sauce base of your usual pies, crumbles, strudels. Lasts between nine and 10 months.

It’s best not to wash your berries before freezing otherwise they tend to trap moisture and clump together. If you do, leave to dry and take the extra step of patting them down before popping into the freezer.

These are delicious whizzed up into smoothies, as well as baked into muffins. Lasts between six and nine months.

The federal election campaign is a warning to over-sharing parents