Not for everyone. Prince William and Princess Kate grappled over possibly bringing their youngest son, Prince Louis, to Queen Elizabeth II’s state funeral, a source exclusively tells Us Weekly.

“Kate and William flip-flopped over whether Louis should attend the queen’s funeral,” the insider says, noting that the couple “came to the conclusion that the procession and service would be too lengthy and overwhelming for their youngest to handle and digest.”

As a result, the 4-year-old “stayed with the nanny” on Monday, September 19, while his older siblings, Prince George and Princess Charlotte, accompanied their parents to the Westminster Abbey service and walked behind their great-grandmother’s coffin during the procession. The family was on site to remember Elizabeth, who died at age 96 on September 8. 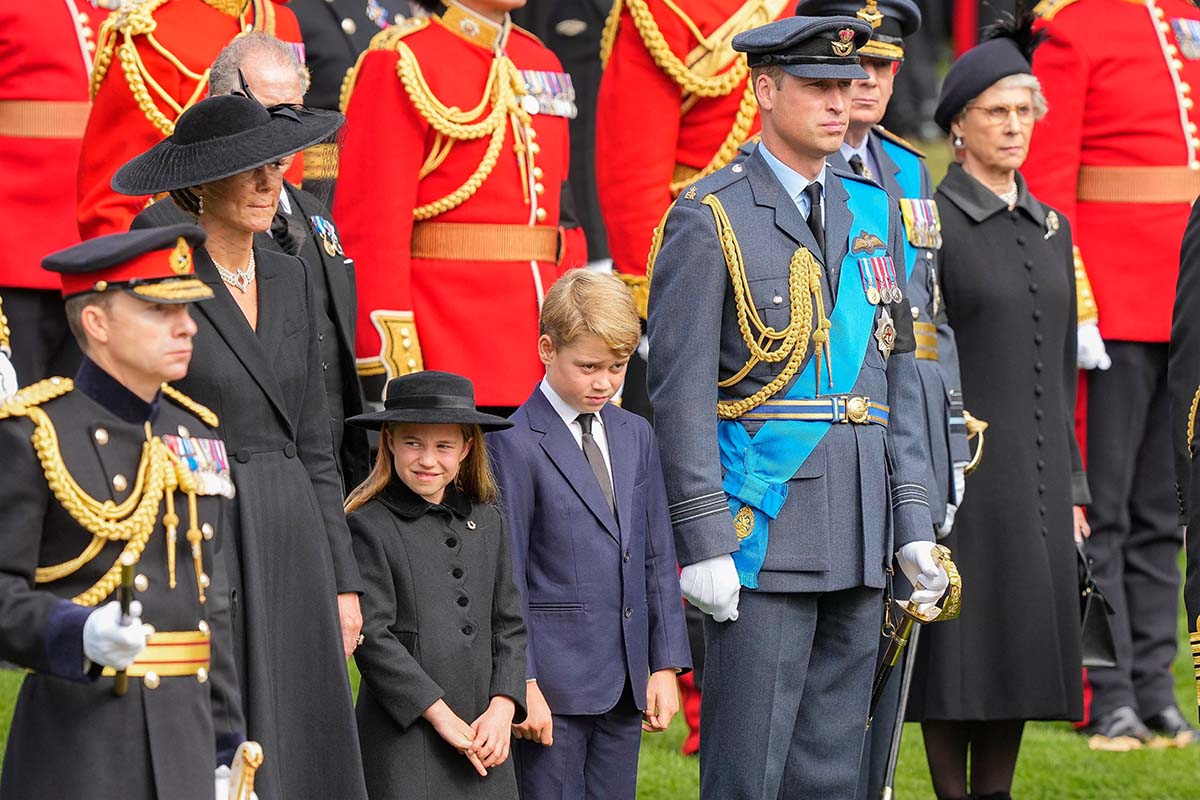 Royal expert Myko Clelland pointed out that due to the length and formality of the event it “must be quite a difficult decision to make” as to which children would be in attendance. “I wouldn’t be surprised if [William and Kate] even asked the children themselves if they’d like to go,” he exclusively tells Us. “I think they very much love their family and I think they take that as their first priority.”

George, 9, and Charlotte, 7, arrived at Her Majesty’s service on Monday with their mother, the Princess of Wales, 40, and their step grandmother Queen Consort Camilla. They were the youngest members of the British royal family in attendance, as many of their cousins, including Prince Harry and Meghan Markle’s two children, Archie, 3, and Lili, 15 months, were not spotted at the church.

Their ‘Gan-Gan’! Queen Elizabeth’s Best Moments With Her Great-Grandchildren

“Some of the younger royals, the younger siblings perhaps, [are] a little too young to quite get there,” the British royal expert and genealogist at MyHeritage.com says.

Clelland notes that George and Charlotte’s presence at the public event is similar to the moment when a young William and Harry were seen walking behind the coffin during Princess Diana’s funeral in 1997. 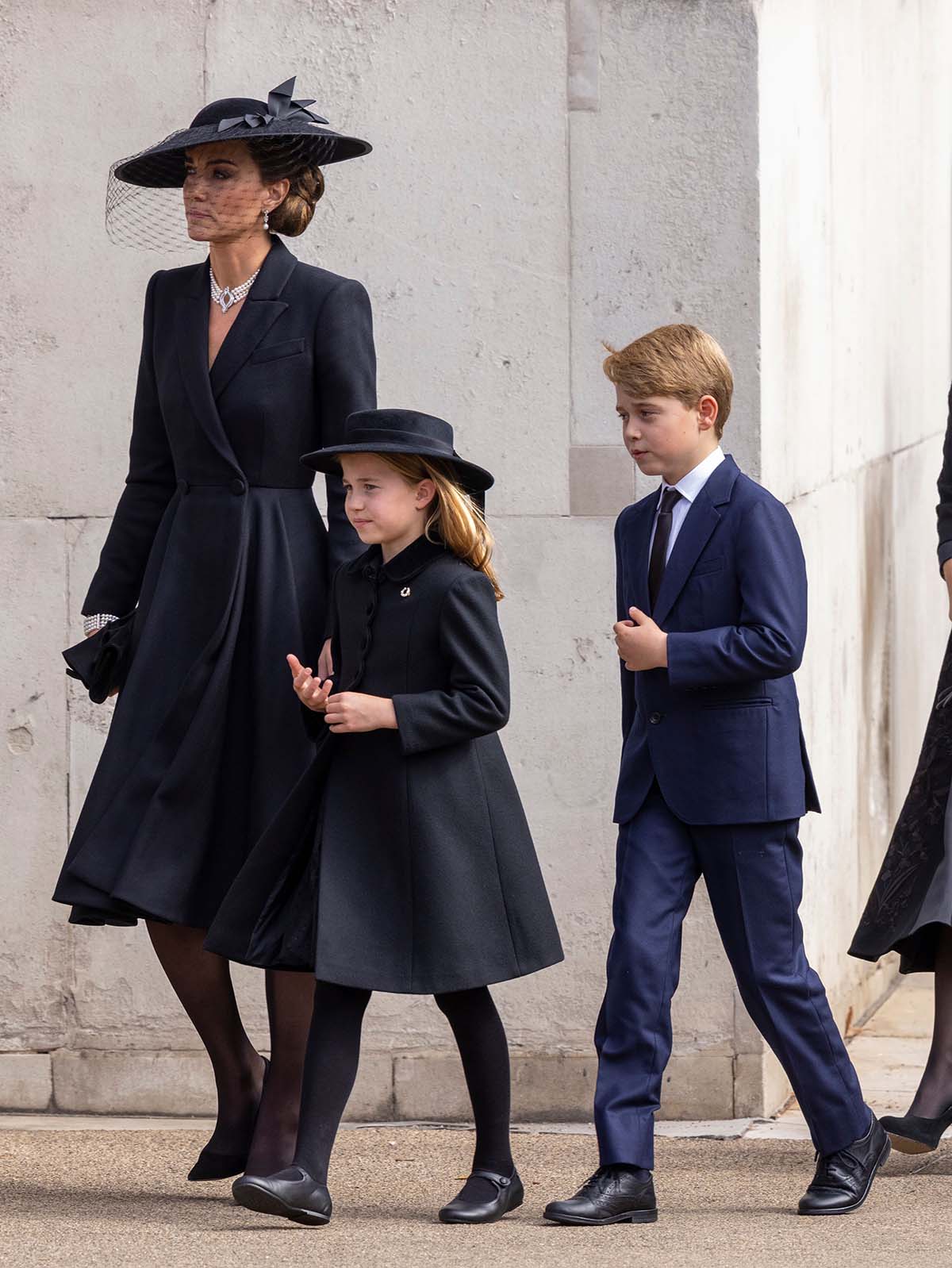 “It was a moment that really forged an early perception of those two young boys who are now, you know, men and they’ve grown up in that shadow,” he explains. “I think William and Harry have both made very clear that they don’t want their families to be focused [on or] part of the media circus. And they want them to have a childhood and a life.”

Clellan, however, tells Us that George’s visibility at the queen’s funeral and other state occasions may become more common since he is now second in line for the throne behind his father.

“[George’s] preparation started from the moment he [was] born and will continue and will slowly increase as he gets closer to that fateful day,” he says, pointing out that William and Kate, both 40, have “taken their responsibilities as parents quite seriously” and managed to keep their little ones out of the spotlight when possible.

Queen Elizabeth II’s Funeral Comes to an Emotional End — What Comes Next?

The Wales family has seeming found balance between their private lives and their royal duties. Through it all, William and Kate’s kids appear to have held onto their childhood, which funeral viewers witnessed once again on Monday.

During the service, Charlotte was spotted instructing her big brother to take a bow while paying homage to their great-grandmother. The princess was also seen crying outside of Westminster Abbey as she big farewell to the queen.

Even though Louis wasn’t at the service, Kate previously told mourners that her youngest child had a sweet thing to say when he learned of the queen’s passing. The Duchess of Cambridge recalled Louis saying, “At least Grannie is with Great-Grandpa now.”

Following the memorial service, Her Majesty’s coffin was transported to Winsdor Castle for a committal service at St George’s Chapel. The family will have one final vigil on Monday night at which time the queen will be buried beside her longtime love, Prince Philip, her parents, King George VI and Queen Elizabeth, and her sister, Princess Margaret, whose ashes are kept in the family vault.

Chloe Sevigny, Alice Braga, Kid Cudi Star in Luca Guadagnino Series ‘We Are Who We Are’