Dubai, United Arab Emirates: Iranians took to the streets of the capital on Monday to protest the death of a young woman who had been detained for violating the country’s conservative dress code.

The semiofficial Fars news agency said students in many Tehran universities gathered in protest, demanding an investigation into the death of Mahsa Amini and the dismantling of the morality police, who were holding her when she died. 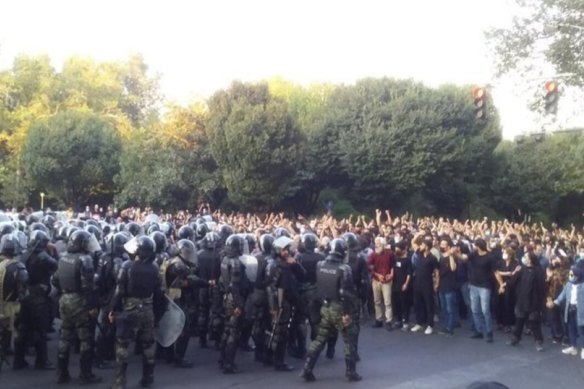 Protesters clash with police in Tehran over the death of Mahsa Amini.Credit:France24/internet

Witnesses said demonstrators poured into Keshavarz Boulevard, a central thoroughfare, chanting “Death to the Dictator.” They also chanted against the police and damaged a police vehicle. The witnesses spoke on condition of anonymity out of security concerns.

Late on Monday, Associated Press reporters saw torched trash bins and rocks strewn across some downtown intersections as the smell of tear gas hovered in the air. Police closed roads leading to the central Vali-e Asr square. Plainclothes security forces and groups of riot police could be seen throughout the area, and mobile internet service was down in central Tehran.

Dozens of protesters on motorbikes briefly appeared at a couple of junctions, where they overturned trash cans and chanted against authorities before speeding off.

Videos circulating on social media meanwhile showed a third day of demonstrations in Kurdish cities in western Iran as well as the northern city of Rasht and a university in the central city of Isfahan. The Associated Press could not independently verify the authenticity of the footage.

The morality police detained the 22-year-old Amini last Tuesday for not covering her hair with the Islamic headscarf, known as hijab, which is mandatory for Iranian women.

Police say she died of a heart attack and deny that she was mistreated. They released closed-circuit video footage last week purportedly showing the moment she collapsed. Her family says she had no history of heart trouble.

Amini, who was Kurdish, was buried Saturday in her home city of Saqez in western Iran. Protests erupted there after her funeral and police fired tear gas to disperse demonstrators on Saturday and Sunday. Several protesters were arrested.

Iran’s President Ebrahim Raisi, who departed for New York on Monday to address the UN General Assembly, has ordered an investigation and vowed to pursue the case in a phone call with Amini’s family. The judiciary has launched a probe, and a parliamentary committee is also looking into the incident.

The hijab has been compulsory for women in Iran since the 1979 Islamic Revolution and the morality police are charged with enforcing that and other restrictions. The force has been criticised in recent years, especially over its treatment of young women.

Dozens of women removed their headscarves in protest in 2017. Iranians have also taken to the streets in recent years in response to an economic crisis exacerbated by Western sanctions linked to Iran’s nuclear program.

6 Things You Can Do to Stay Politically Active, Even When It's Not an Election Year

1st US patient with coronavirus leaves hospital to recover at home