The Princess of Wales wants to raise her children in the same style as Prince Edward and Sophie Wessex, a royal book has claimed.

The New Royals: Queen Elizabeth’s Legacy and the Future of the Crown, by Katie Nicholl, claims Kate Middleton admires the parenting techniques used by the Wessexes, who share children Lady Louise Windsor, 18, and James, Viscount Severn, 12.

Despite their parents being working royals, the children, who are the youngest grandchildren of Queen Elizabeth II and Prince Philip, grew up without HRH titles and out of the public eye. 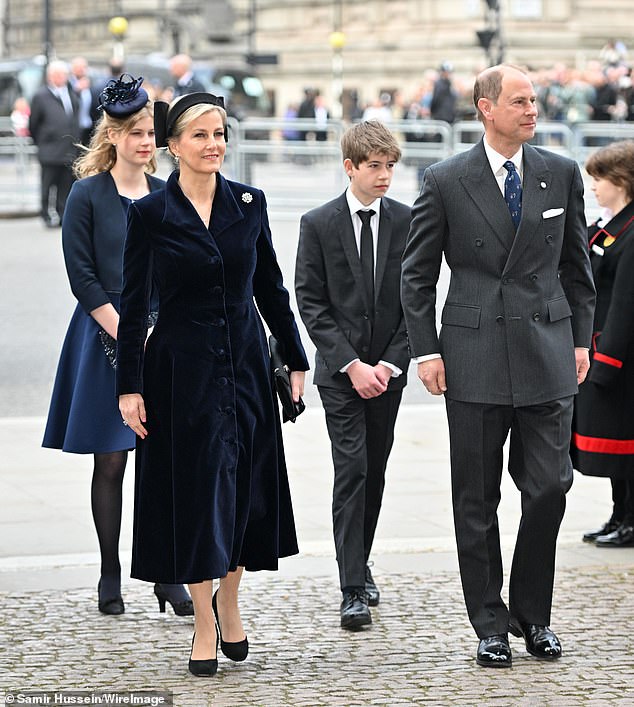 Kate Middleton reportedly admires the style with which the couple have raised James, Viscount Severn, 14, and Lady Louise Windsor, 18, who both grew up without HRH titles and out of the public eye

Nicholl claimed Kate, 40, admired how Prince Edward and Sophie Wessex managed to give their children a quiet upbringing despite being at the heart of the Royal Family.

During the pandemic, Sophie Wessex, 57, said she wanted her children to grow up with a strong work ethic.

And after finishing school in June this year, Lady Louise Windsor showed she had paid heed to her mother’s wishes when it was revealed she had taken a summer job at a garden centre.

Although the name and location of the garden centre has not been revealed, it is thought the Queen’s granddaughter was earning £6.83 per hour in her role.

After receiving her A Level results in August, Buckingham Palace confirmed the 18-year-old would be attending the University of St Andrews, following in the footsteps of her cousin, Prince William, 40. Whereas the Prince of Wales studied geography, Louise will read English.

It has not yet been decided if Louise will become a working royal after her graduation. 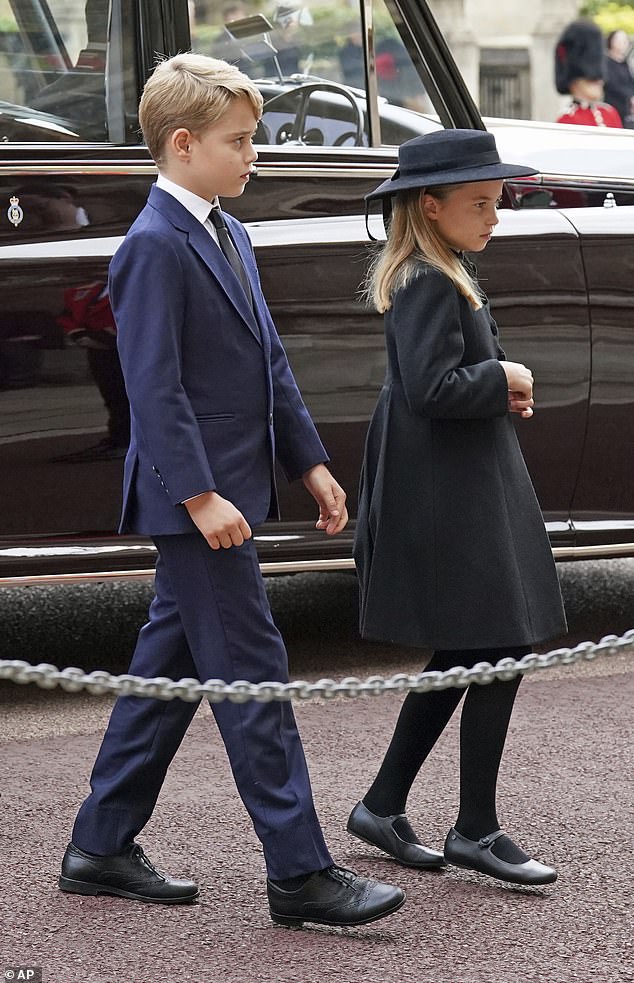 Sibling love: Prince George, nine, and Princess Charlotte, seven, pair were seen walking side by side into Windsor Castle, the final resting place of their precious great-grandmother 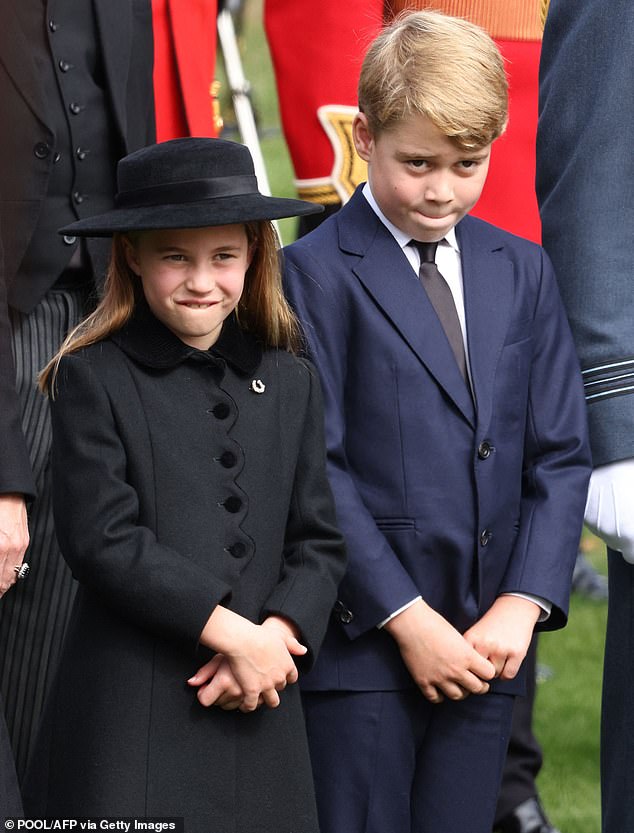 Sibling unity: The young royals were inseparable throughout the day and were barely seen away from each other’s sides. Pictured here at Wellington Arch following the funeral service at Westminster Abbey 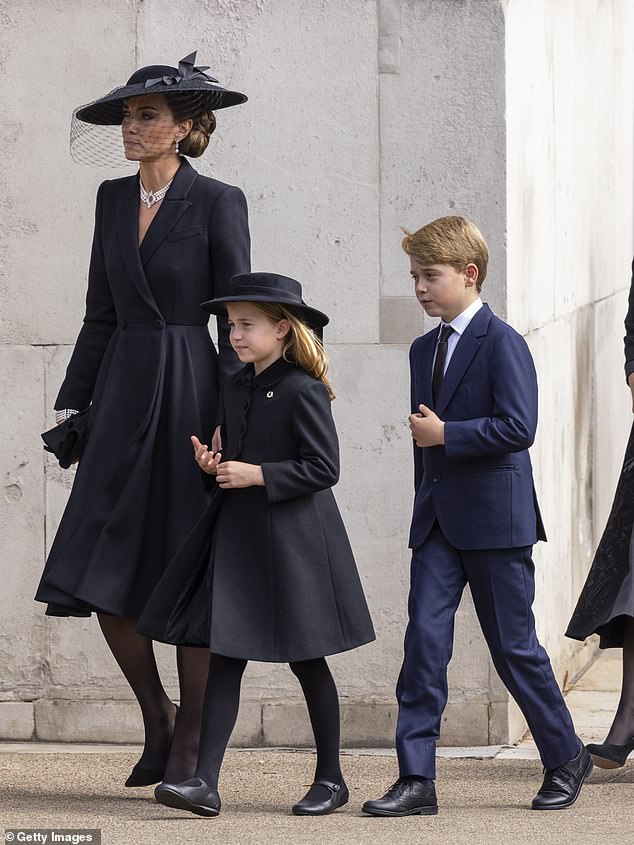 While meeting with well-wishers outside the Sandringham Estate last week, Kate and William gave a glimpse into how they raise their brood, telling members of the public they wanted to keep things ‘as normal as possible’ for Prince George, nine, Princess Charlotte, seven, and Prince Louis, four.

Royal author Nicholl wrote that, while the Prince and Princess of Wales bring up their children in a down-to-earth style, Prince George of Wales has his future fairly set in stone as heir-to-the-throne.

Although Princess Charlotte of Wales, seven, may have more choice about her role within the family, she remains the ‘spare’, so must have that in the back of her mind if she pursues another career. Meanwhile Prince Louis, four, could choose to become a non-working royal.

Prince George and Princess Charlotte joined Lady Louise and Viscount Severn at the state funeral and committal of Her Majesty the Queen, who died peacefully aged 96 at Balmoral Castle on September 8.

Having been described as the ‘favourite’ grandchild of the monarch, Louise famously shared a passion for all things equestrian-related with both her grandmother and late grandfather Prince Philip.

Lady Louise looked emotional as she took her place by her grandmother’s casket.

She wore a traditional black dress for the event, which she accessorised with the necklace, which appeared to be fashioned from a silver-coloured metal. 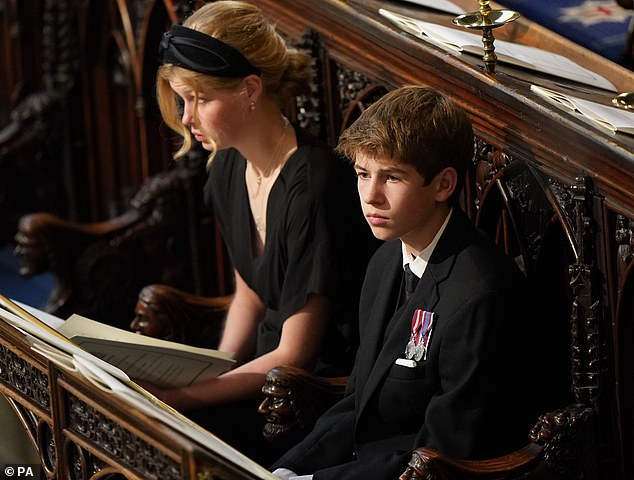 Lady Louise and James, Viscount Severn pictured at the Committal Service for the Queen, held at St George’s Chapel in Windsor Castle

After Prince George and Princess Charlotte attended Her late Majesty’s funeral at Westminster Abbey in London, they travelled with their mother Kate Middleton, Princess of Wales, to St George’s Chapel in Windsor for a Committal Service, where the Queen was laid to rest.

Many royal fans expected Prince George, nine, and Princess Charlotte, seven, not to have a role in the Committal Service, however they were pictured walking into the Chapel behind Her Majesty’s coffin.

Prince George and Princess Charlotte of Wales had stood in the front row at Westminster Abbey as they sang hymns while standing with their parents.

The Princess of Wales provided a reassuring presence throughout, tightly holding onto her daughter’s hand at the family arrived at Westminster Abbey – and offering a pat on the knee to her eldest son as the family were seated ahead of the service.

Covid restrictions could be reintroduced at Christmas if Brits don't get booster jabs, minister warns