Royals back in action! King Charles and the Queen Consort are joined by Princess Anne and Prince Edward to host a reception for Olympians and Paralympians after a jam-packed day at Buckingham Palace

Olympic and Paralympic heroes including Tom Daley and Lauren Steadman gathered at Buckingham Palace for a reception with the King and Queen Consort this evening on a day which saw hundreds of people visit the primary royal residence.

More than 200 medallists who won gold, silver and bronze at Tokyo 2020 and Beijing 2022 Winter Games were invited to the event this evening to celebrate their indredible achievements.

The King and Queen Consort were in the presence of an Olympian before their guests even arrived as they were joined with silver medallist Princess Anne, as well as Prince Edward and the Duke of Gloucuester, for the reception. 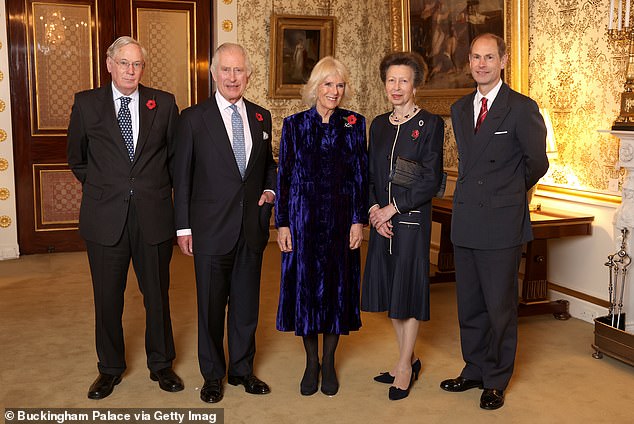 The King and Queen Consort were joined by Charles’s siblings Princess Anne and Prince Edward, as well as the Duke of Gloucester 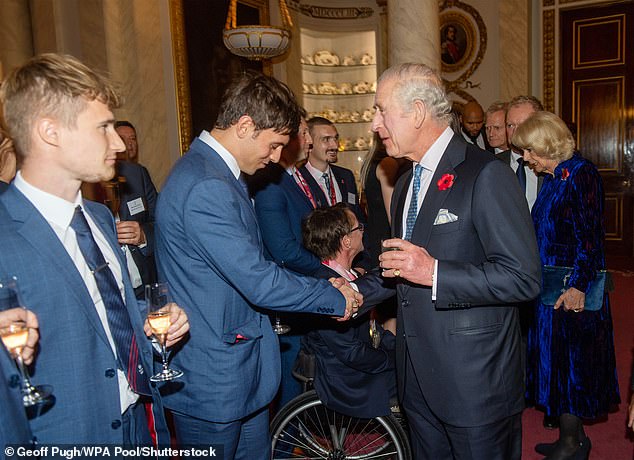 The King couldn’t help but smile as he shook the hand of Tom Daley, Olympic gold medallist for diving

It is the first time the three siblings have been pictured together since the Queen’s funeral last month, although notably Prince Andrew, who is no longer a working royal, was not present.

As King Charles greeted some of the stars, he was jovial and grinned as he appeared to punch the air, animated by the impressive company he was keeping.

The King, 73, has had a busy day of engagements including his second weekly audience with the prime minister Rishi Sunak, as well as an earlier reception at Buckingham Palace which celebrated the 50th anniversary of the Resettlement of British Asians from Uganda.

Despite his incredibly busy day the new monarch has maintained his smile while greeting people throughout – and also seemed unfazed by the looming UK air date of series five of The Crown. 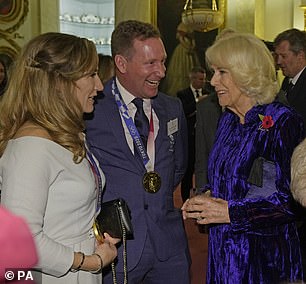 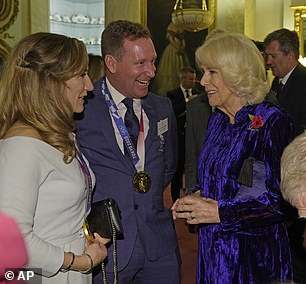 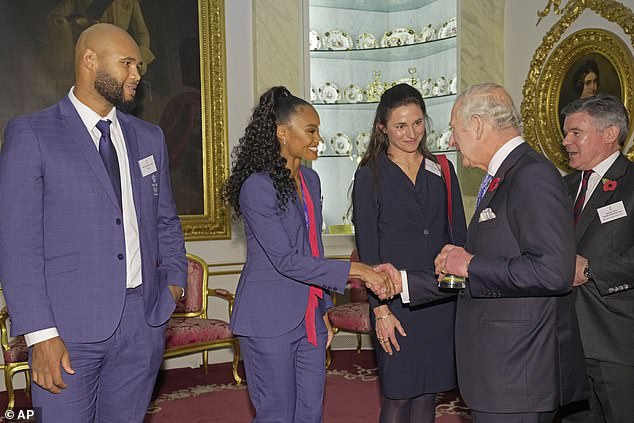 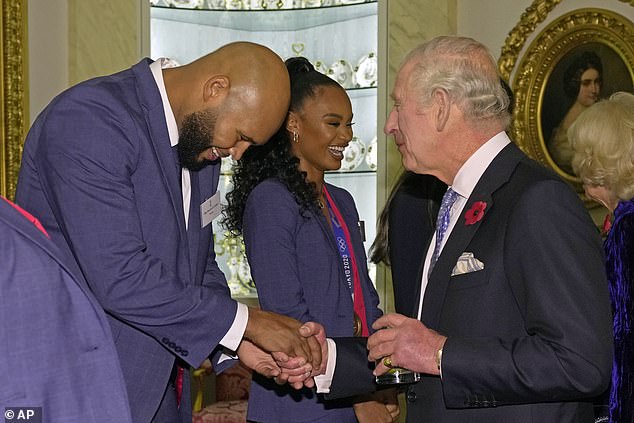 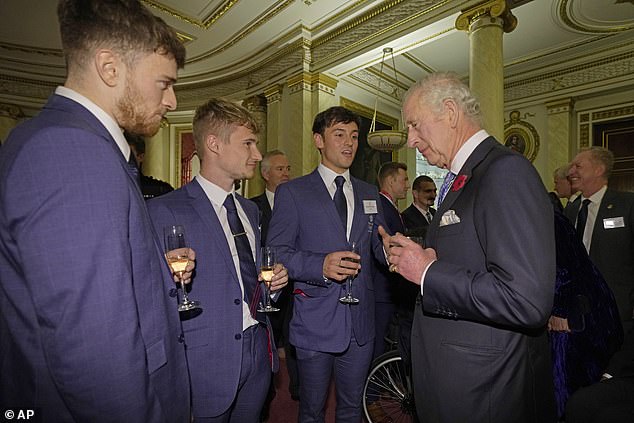 Tom Daley, who won an Olympic gold medal at the Tokyo 2020 Summer Olympics in diving, chatted to the King with Jack Laugher and Mathew Lee 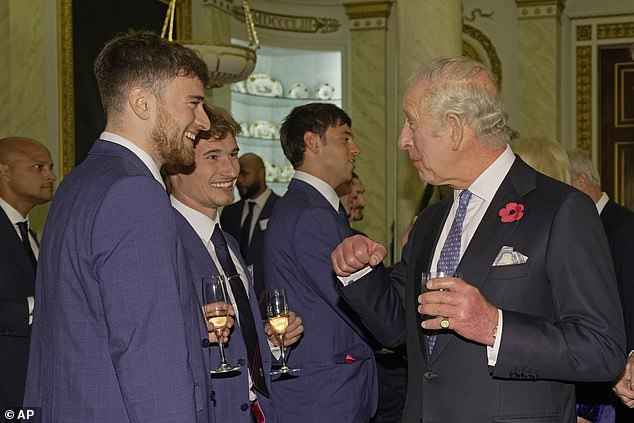 King Charles showed Buckingham Palace was back in action as he hosted Olympic and Paralympic heroes at a reception this evening. Pictured: The King chatting to Olympic medallists Jack Laugher and Mathew Lee 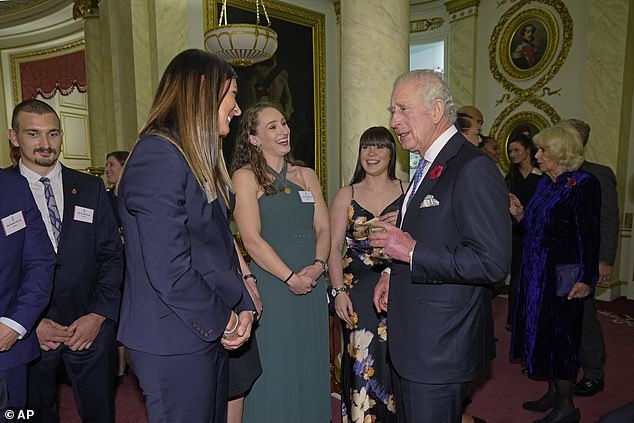 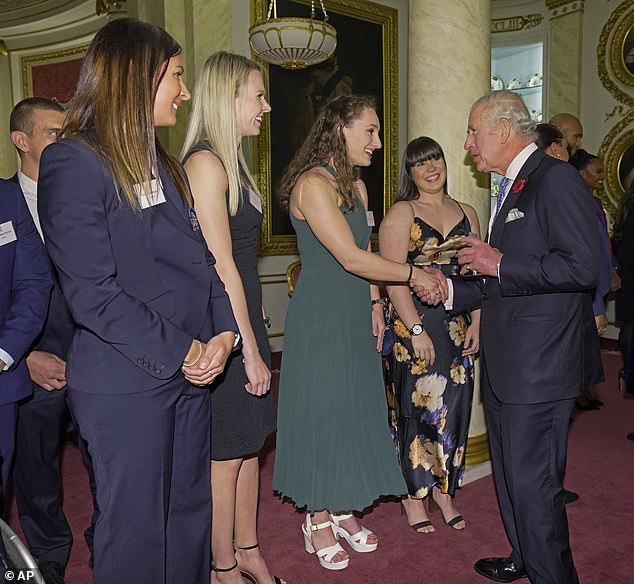 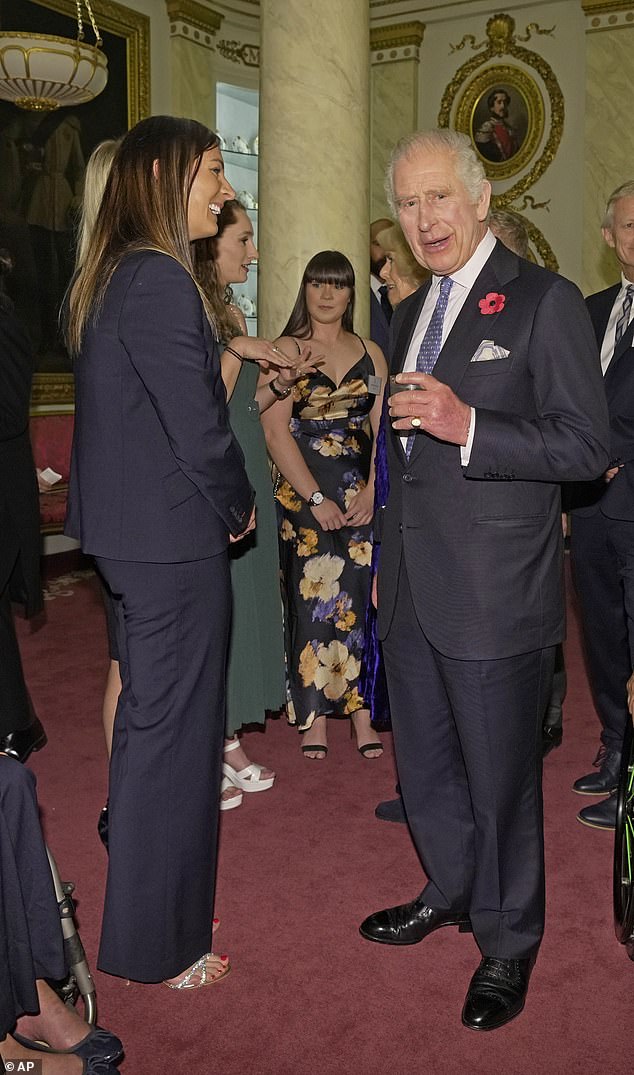 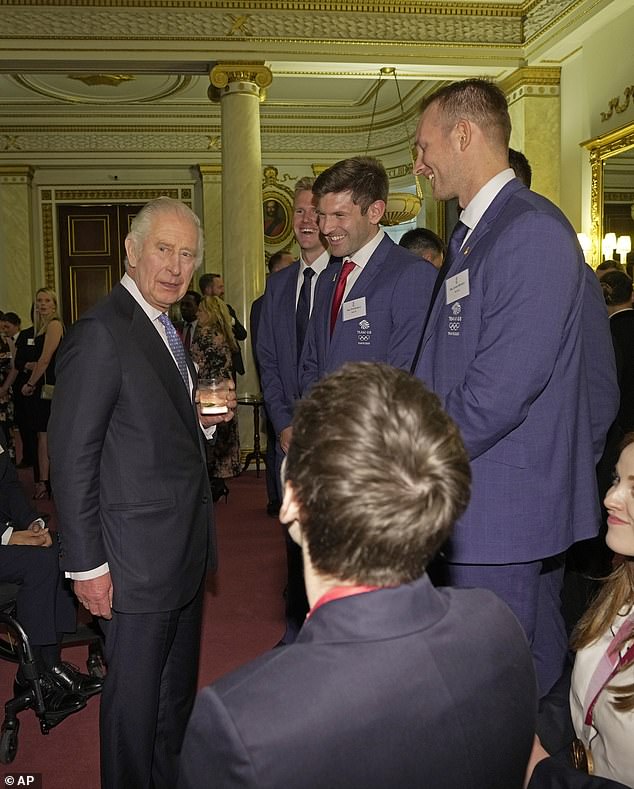 Yesterday it emerged that the new series will show a four-minute-long depiction of Princess Diana’s interview with Martin Bashir in 1995, which the royal family has since heavily criticised.

After Lord Dyson’s independent review into the BBC panorama interview found that Bashir had ‘acted inappropriately’ in obtaining the interview, Prince William delivered a scathing statement branding the incident ‘unethical’ as he begged media outlets never to broadcast it again.

Despite the revelation about the new series of the Netflix royal drama, both King Charles and the Prince of Wales have carried out their royal duties with smiles on their faces today. 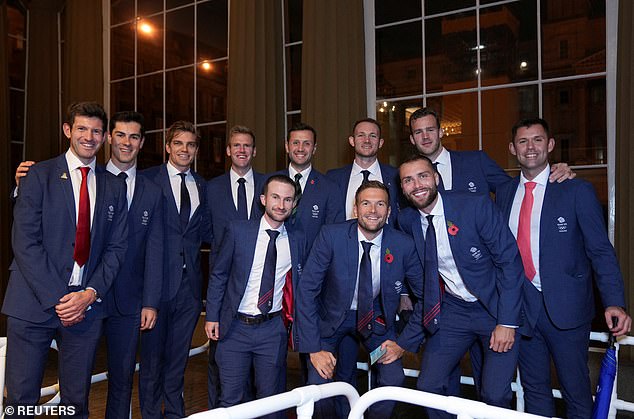 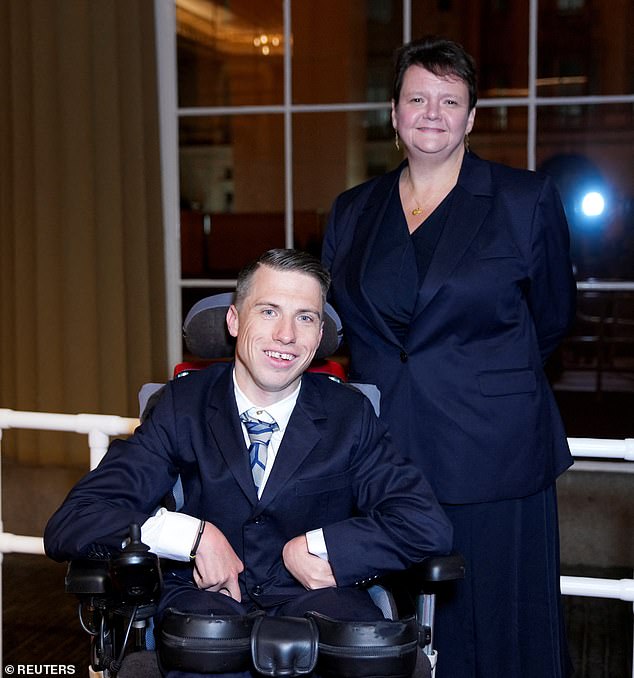 David Smith, a Paralympic rower, smiled for a photo as he attended the reception at Buckingham Palace 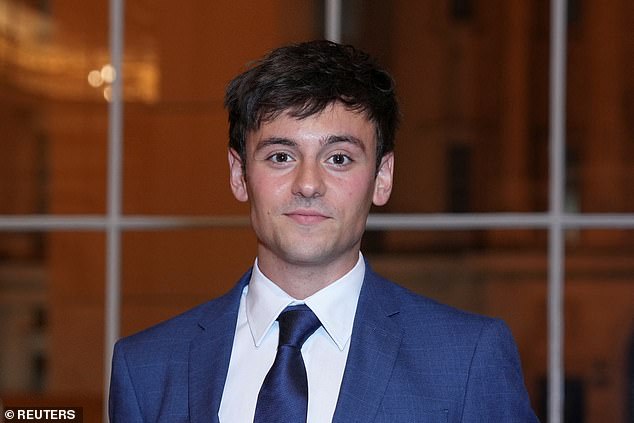 Olympian Tom Daley, who won a gold medal at the Tokyo 2020 Olympics in diving, attended the reception 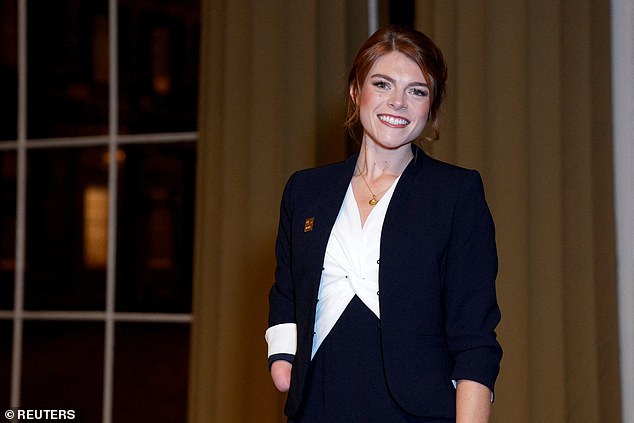 Lauren Steadman, a paralympian who competes in swimming, the triathlon and who has also been a contestant on Strictly Come Dancing, wsa pictured at the reception 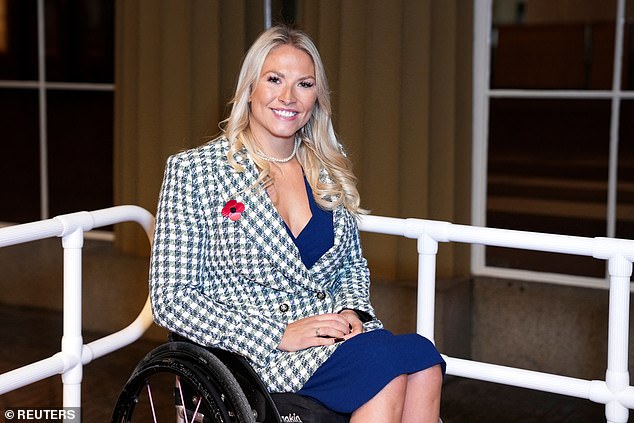 Samantha Kinghorn, a world champion wheelchar racer from Scotland, wore a stylish blue dress and dogtooth blazer as she attended the reception

For the third successive summer Olympic Games, Team GB netted more than 60 medals – with the team winning 64 in Japan, cementing their status as a leading force in world sport.

Paralympics GB finished second in the medal table with 124.

Dame Sarah Storey won three gold medals at Tokyo 2020 in cycling events, taking her tally of Paralympic golds to 17 and making her the most successful British Paralympian, while Hannah Cockroft defended her Paralympic 800m T34 title to win her seventh Paralympic title.

The postponement of Tokyo 2020 to the summer of 2021 meant a short six-month gap to the Beijing 2022 Olympic Winter Games, where Team GB’s curlers did exceptionally well.