The Liberal Party will hold off on releasing its federal post-election review until after the Victorian state election in November, in a move designed to avoid any potentially damaging public revelations before the poll.

The review of the 2022 election was announced in the days after the Coalition’s May election defeat and is being led by two Victorians, long-time former Liberal Party director Brian Loughnane and shadow finance spokeswoman senator Jane Hume. 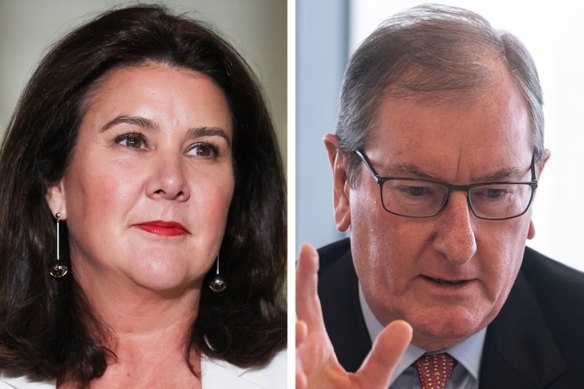 The Victorian state election is due to be held on November 26 and the state Liberals, led by Matthew Guy, face an uphill battle to win a net 18 seats in the 88-seat state parliament and claim majority government from Daniel Andrews and Victorian Labor.

The federal review has received close to 700 submissions so far but former prime minister Scott Morrison and his successor, Opposition Leader Peter Dutton, have not yet been formally interviewed by Loughnane and Hume.

“It makes sense that if you want a brutally frank assessment, you don’t want to cause damage to friends who are having elections around the same time,” he said.

“Let’s face it, the feds never give two hoots about state parties usually. This is sensible political management that they’ve been lacking in the past.”

The state Liberals review of their 2018 election thrashing, undertaken by Liberal veteran Tony Nutt, found that the decision to dump Malcolm Turnbull from the leadership was a major contributing factor to that loss.

At the federal poll last May, the Liberals lost two seats to Teal independents in Goldstein and Kooyong and two to Labor in Higgins and McNamara.

Morrison has already had an informal conversation with Loughnane but the suspension of parliament this week because of the death of Queen Elizabeth has delayed the formal interview.

One person who has already made a contribution to the review is former prime minister Malcolm Turnbull, who specifically requested a chance to make his views known.

The Age and The Sydney Morning Herald have been told the former prime minister said that the Liberal Party needed to select candidates like Allegra Spender, the Teal member for Wentworth whose grandfather, Percy and father, John, both served as federal MPs for the Liberals.

Spender stood as a Teal independent and won Wentworth, which Turnbull held for 14 years, from the Liberal Party’s Dave Sharma. During the campaign Turnbull urged Australians to vote for independent candidates if they reflected their values.

Hume and Loughnane are scheduled to meet with the party’s state directors later this week to discuss the campaign and what lessons the party needs to learn.

A significant proportion of the submissions to the review have come from the party’s New South Wales division, which was bitterly divided in the lead up to the election over the pre-selection of candidates, a temporary federal take-over and subsequent High Court case.

But the former government claimed just one of those seats, Hughes, which it had lost temporarily to rogue former MP Craig Kelly.

In May, Dutton said the defeated government had “heard a message loud and clear from the Australian public”.

“We were a government of nine years, the last couple of years have been some of the most dramatic, certainly that I’ve experienced in my 20 years in public life,” he said.