The joke didn’t land. Jimmy Kimmel drew backlash when he pretended to be dead onstage as Quinta Brunson accepted a Primetime Emmy Award for her sitcom Abbott Elementary.

“I know Jimmy Kimmel, and I don’t know. I felt like the bit didn’t bother me that much,” Brunson, 32 — who won for both Outstanding Writing and Lead Actress in a Comedy Series at the Monday, September 12, awards show — told reporters in the Emmys press room after picking up the honor.

The Philadelphia native added that Kimmel was an early supporter of Abbott Elementary, which she created.

“Honestly, it was kind of … Jimmy gave me my first big late-night spot and was one of the first people to see Abbott,” she continued. “He Instagram messaged me that he saw this comedy and thought it was one of the greatest comedies of all time, and he was so excited it was going to be on ABC.”

Brunson then joked that maybe she’ll begin to feel differently after further reflection. “Tomorrow, maybe I’ll be mad at him. I’m going to be on his show on Wednesday, so I might punch him in the face. I don’t know what’s going to happen,” she quipped. 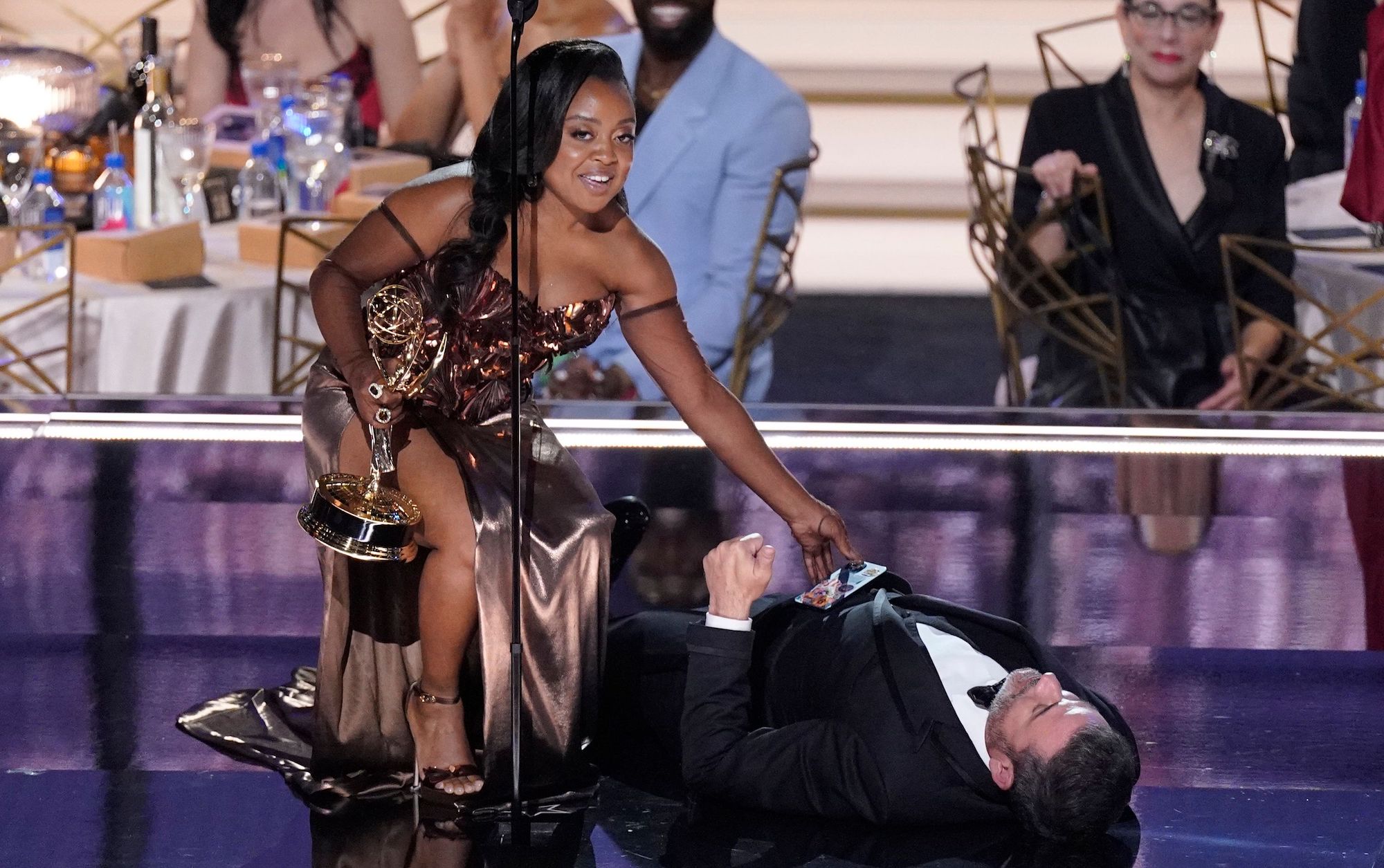 The 54-year-old late night host’s gag began with Will Arnett dragged him onstage to present the award. He pretended to be dead while Arnett, 52, read the nominees and announced the winner. Some viewers didn’t appreciate that he remained motionless onstage while Brunson gave her speech.

“Jimmy Kimmel should have left the stage during Quinta’s speech. Highly disrespectful,” one Twitter user wrote.

“Quinta Brunson deserved better than giving her acceptance over Jimmy Kimmel’s ‘dead body,’” another chimed in.

The Man’s Show alum, for his part, had nothing but nice things to say about the Black Lady Sketch Show actress after the incident.

“She is so unbelievably talented. And I saw her pilot before it came out on ABC, and I wrote to her, and I was like, ‘I don’t know how we got this, but congratulations. You made a pilot that any network would be ecstatic to get.’ She’s a lovely person as well,” he told Entertainment Tonight after the Emmys.

Before beginning her acceptance speech, the Single Parents alum said, “Jimmy, wake up, I won.” When the New York native didn’t budge, she joked, “OK, hold my phone,” and proceeded.

And the Winners Are! See the Best Dressed Stars at the 2022 Emmys

Brunson thanked her family, including husband Kevin Jay Anik, calling him “the most supportive man I’ve ever known.”

Asda joins Tesco, Sainsbury’s and more in nationwide ban of one popular product