Californian indie rock royalty Pavement will return to Australia next year for the first time since 2010, playing seven headline shows and the new Tent Pole festival at Mt Duneed in Victoria.

Guitarist and songwriter Scott Kannberg said the group was thrilled to have new Australian shows to look forward to given they “have a big history” with fans around the country. 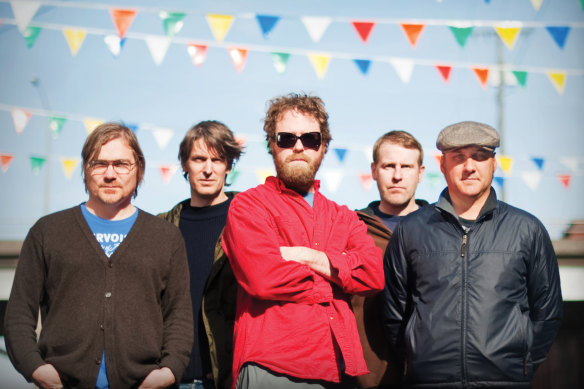 Pavement will tour Australia in February and March next year.Credit:Tarina Westlund

“It will be good to see Magic Dirt,” Kannberg told The Age and Sydney Morning Herald. “I’ve seen them a bunch of times in Australia, and they played with us in the early days.

“I like a lot of those younger bands on the Tent Pole bill too, and what’s better than having a sip of wine and watching some indie rock?”

Playing the songs is really fun. It definitely makes us happy.

Kannberg and fellow Pavement member, guitarist, singer and songwriter Stephen Malkmus, were in their early 20s when they formed the group in 1989. Following 1992’s debut album Slanted and Enchanted the band released four more critically acclaimed albums throughout the ’90s before disbanding in 1999.

Widely regarded as helping usher in the hugely popular indie rock scene that shook up the music industry in the late 1980s and early ’90s, Pavement’s 1994 song Cut Your Hair received only modest radio play but the band’s cult following still remains strong.

The group celebrated its 30-year anniversary with shows at the Primavera Sound festival in Spain and Portugal in June, ahead of the North American leg of their current tour beginning earlier this month. 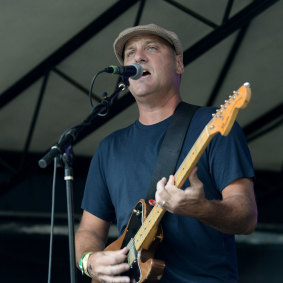 “Playing the songs is really fun. It definitely makes us happy … and we go see bands on our nights off.”

Kannberg, who records his solo music under the name Spiral Stairs, was living on Victoria’s Mornington Peninsula as the COVID-19 pandemic escalated. He returned to California, but hopes to “settle down” in Australia at some stage in the future.

Pavement’s original drummer was replaced by Scott West after their first album, and the line-up has remained the same since 1993, with Mark Ibold on bass and Bob Nastanovich on percussion and keyboard.

“We were lucky to be around great bands, and to be influenced by really great bands,” Kannberg said. “A lot of those bands we opened for, or they opened up for us … and that’s the way it should be.”

R.E.M., The Replacements and English post-punk group The Fall are among the bands that influenced Pavement’s early lo-fi, alternative style.

In their first decade together Shady Lane, Gold Soundz and Unfair were among the songs that garnered Pavement a hugely loyal fan base.

In the two decades since they broke up, Malkmus has played and recorded with his own band, called the Jicks, but Pavement reunions are still hugely anticipated, and greeted with delight by fans.

My ex has broken my heart twice, but I can’t stop thinking about her

Puppies rescued after being abandoned in car at Caterham Tesco