This wrap of reviews for the Melbourne arts scene kicks off with the Australian Ballet’s latest production, plus a revival of a Brecht classic at La Mama, and a romantic comedy at Theatre Works. 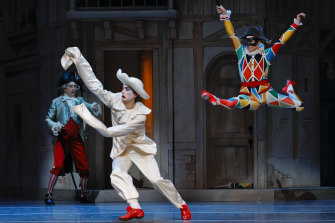 Harlequinade, with its flash and finery, its elegance and finesse, is a clever bit of illusionism. It’s a work that transports us in time and place, evoking the colour, cosmopolitanism and complacency of the Russian court of the late 19th century.

This two-act comic ballet by the great Marius Pe tipa – with a perky score by Riccardo Rigo – was first staged in 1900 in St Petersburg. This new version aims to recapture the look and feel of that premiere. 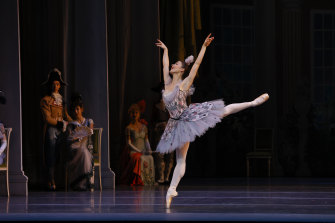 Petipa’s original choreography, which has not been seen since 1927, was reconstructed in 2018 by Alexei Ratmansky using archival records: a restoration process he has used on other Petipa works such as Sleeping Beauty and Swan Lake.

The subject is a stock piece of commedia dell’arte foolishness. The penniless trickster Harlequin wants to marry Columbine, but her tight-fisted father is against the match. The intercession of a good fairy with a magic slap stick sets all to rights.

Anyone who fears the earthy ribaldry of the commedia – where Harlequin’s stick is traditionally both weapon and phallus – can rest assured. There is nothing here that could offend the fastidious tastes of a tsar or tsarina. This is the most modest fairy tale.

Benedicte Bemet, who danced the doe-eyed Columbine on opening night, is light and precise and at all times tractable. Sharni Spencer is delightful as the mischievous Pierrette. And Brett Chynoweth as Harlequin impresses with his command of the stage. 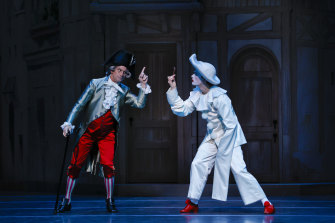 The dancers are equal to the ballet’s technical demands, but I think they get the mime gestures all wrong. Mime is not a game of charades: it needs to be funny. And it’s only funny when it has a sort of rigidity or mechanical quality. Still, Harlequinade has charm. There are beautiful group symmetries, varied patterns, endlessly beating calves and much twinkling pointwork. There is even a large cohort of gorgeously costumed children from ballet schools across Victoria who parody the adults.

It all culminates in a grand post-nuptial pas de deux in which Harlequin plays a dashing hunter while Columbine flounces like pretty bird. She is an easy prey, of course, and subsides gracefully into his arms, signifying the happily ever after.

Well, of course, a return to the classicism of Petipa also means a return to a particular system of gender relations. Turn of the century St Petersburg might be a diverting place to visit – but how long would we want to stay? Reviewed by Andrew Fuhrmann 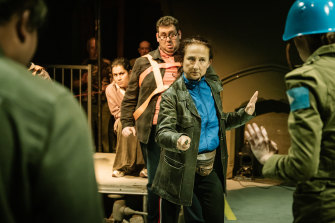 Mother Courage and Her Children ★★½

War is indeed a ceaseless engine of destruction, as Brecht portrayed in Mother Courage and Her Children, and the most famous anti-war play of the 20th century will be relevant for as long as war persists. Why, then, are productions of it so thin on the ground in Australia? Why does Brecht’s style of epic theatre seem to be loved by theatre artists and yet loathed by the masses?

The question’s worth asking in the wake of this La Mama production, which does at least partly achieve what Brecht set out to do when he devised defamiliarisation techniques and the principles behind his political theatre. 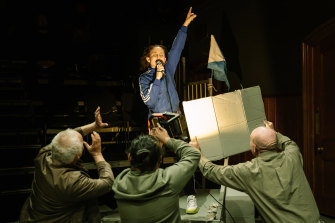 This show challenges the audience to think rather than feel; it makes theatre part of the world rather than using it as a form of escape.

No one could accuse its poor theatre vision of succumbing to naturalism or to melodrama. The actors dress in costumes scrounged from op-shops. The fourth wall is regularly breached. The acting never seeks to manipulate our sympathies, emphasising dialectic argument over character, and there are striking resonances from recent Australian wartime experience – the grotesque spectacle of a soldier drinking from a prosthetic leg, for one.

Brecht himself might have approved of Bagryana Popov’s performance as Mother Courage. Productions during the playwright’s lifetime tended to highlight maternal suffering, leading audiences to overlook the character’s complicity in warfare and her callous profiteering from it.

Popov gives full play to the ugliness and blindness of Courage’s behaviour. She’s a cunning, streetwise, endlessly calculating survivor – a bogan Mother Courage who pours her vitality into a life-denying enterprise and reaps the whirlwind.

Sure, she’s a victim, too. Courage loves her children, and the morality of the starving can find no just comparison to the deluded pieties of the cosseted, but the contradictions Mother Courage embodies encourage reflection on the systems, beliefs and social structures that perpetuate the tragedy of war.

A diverse cast creates powerful moments, with forceful performances from Tom Considine as the Cook, Richard Bligh as the Chaplain, Kate Bayley as sex worker Yvette, and Rodrigo Calderon as Courage’s eldest child – a war hero turned murderer, and one emblem among many of the way in which war corrupts virtue.

Unfortunately, some directorial decisions and design elements don’t do the show any favours, and may leave audiences alienated from theatre itself, rather than bourgeois complacency.

Terrible acoustics are a major problem, exacerbated by the traverse staging and, perhaps, a want of vocal training among some members of the cast. Many songs and some snatches of dialogue are so indistinct as to be virtually inaudible. Such defects remind you that you’re watching theatre, true, but they also compromise the poetic and the consciousness-raising in a way Brecht never intended. Reviewed by Cameron Woodhead 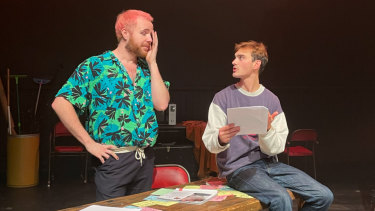 Calling your play 5 Stars is leading with your chin, but Jake Stewart is a playwright of unquestionable talent and a smackdown would be below the belt.

5 Stars dramatises the true story of his unrequited love for performer Joel Beasley. It could have been saccharine and sentimental affair, but it isn’t, partly because it is unsparing in its emotional honesty, but also because it lies nested within a labyrinth of metatheatre that foregrounds the other story, also true, of the complicated process of making art from life.

Stewart and Beasley might not be a match in romance, but as partners in performance they make a charismatic duo. The outbreaks of comedy in the play – from witty banter between actors playing themselves to the goofy spectacle of two of Santa’s elves in a Brokeback Mountain-style tryst – are crisply delivered, with well-turned deflationary humour, vibrant physical comedy, and more than a dash of camp.

There’s also a melodramatic play within a play, amid detours onto the tortured path 5 Stars took from page to stage. As with many new plays, the premiere was delayed for two years by the pandemic. Side projects including a lockdown doco make their way into this production.

But the emotional core of the work lies in its searching, poetic reflections as it grasps for emotional truth, however unflattering or difficult to admit, in what comes across less as an unrequited infatuation – though there’s a bit of that – and more as two divergent perspectives on what love is, that converge in a shared passion for art.

It helps that Stewart writes with a fresh and authentic voice and that he possesses a precise and original gift for metaphor. His command of dramatic structure is less developed than the line-by-line talent for dialogue, though, and all that meandering metatheatre does introduce expositional difficulties.

And yet, there’s a bracing tension between the lovesick playwright grappling with the feelings and fantasies his muse inspires, and that muse’s conflicted response. The dramatic interplay between them touches on the ethics behind aesthetics; it’s soul-baring and deeply felt in a way that secures the extrusions of humour to hard-won insight. Reviewed by Cameron Woodhead