London: The Duchess of Cornwall has said that she and the Prince of Wales can be like “ships passing in the night”, such is their unrelentingly busy schedule.

Camilla, Duchess of Cornwall, says the pressure of official duties means she and the Prince often spend little time together during the day. But she says they always make time for a catch-up over a cup of tea. 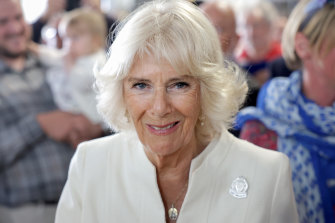 In an interview with British Vogue on the eve of her 75th birthday – in which she discusses how she copes with public criticism, the challenges of being a grandmother and her work with survivors of domestic violence – the Duchess said one of her favourite parts of married life is sitting opposite her husband while they read. “It’s not easy sometimes, but we do always try to have a point in the day when we meet,” she said.

“Sometimes it’s like ships passing in the night, but we always sit down together and have a cup of tea and discuss the day. It’s lovely to catch up when we have a bit of time.”

She added: “When we go away, the nicest thing is that we actually sit and read our books in different corners of the same room. It’s very relaxing because you know you don’t have to make conversation. You just sit and be together.”

The Duchess of Cornwall suggested that members of “the firm” needed to rise above public criticism. Speaking about the unprecedented media scrutiny to which she was subjected during the ’90s – when details emerged of her affair with Prince Charles – she told Vogue: “It’s not easy. I was scrutinised for such a long time that you just have to find a way to live with it. Nobody likes to be looked at all the time and, you know, criticised … But I think in the end, I sort of rise above it and get on with it. You’ve got to get on with life.” 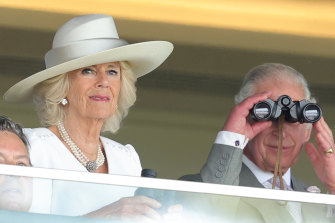 For the Duchess, who keeps a photograph on her desk of the Duke and Duchess of Sussex on their wedding day, one particularly pleasing aspect of that life now is her relationship with her grandchildren, which includes teasing each other over their Wordle scores. “I do Wordle every day with my granddaughter. She’ll text me to say, ‘I’ve done it in three’, and I say, ‘Sorry, I’ve done it in two today’. It’s very satisfactory when it tells you how brilliant you are,” she said.

As well as the royal children, she has five grandchildren aged 12 to 14 from her previous marriage.

“The nice thing about being a grandmother is that you can spoil them occasionally, give them more of the things that their parents forbid them to have,” she said. “The girls are beginning to get into clothes and make-up and it’s rather frightening when you see them, coming out with pierced ears and a lot of new make-up and funny coloured hair.”

She indicated she would carry on her work “as much as she can” once she becomes Queen Consort on Prince Charles’ accession to the throne. “You can’t desert things that you’re in the middle of,” she said. “There’s a lot of things to be done still.”

The Duchess emphasised that a central part of that is her work with survivors of domestic violence.

“I think we all know somebody who it’s happened to. I was hearing it too often, from friends who knew friends, and I thought maybe I ought to look into it to see if there was somewhere for me to help,” she said. “There’s been such a taboo. People can still love the people that abuse them, and feel such guilt and such shame that they think it’s their fault, so they bury it. It becomes a sort of terrible hidden secret.”

Sir Geoffrey Boycott, 79, shuns the media as he picks up knighthood