One of the most magical things about ESSENCE Festival is that it brings together brilliant Black women from across multiple industries who sit in leadership positions at some of the biggest, most influential, and most well-known companies in the world. The strong sense of sisterhood that the Festival organically encompasses each year provides a safe space of sorts where these women come to share their experiences, insights, and invaluable advice in ways that they never have before. 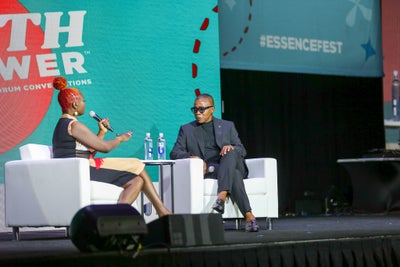 As Caroline opened the discussion by thanking Dr. Wilson for taking time out from her busy schedule to be at the Festival before asking her to tell the audience who she is and what her journey was to become that person, she noted that there was no place she’d rather be.

“I can’t think of anywhere else I would rather be but here,” Dr. Wilson said. “I come from a long generation of strong Black women…this is home; there’s nothing more important. Who am I? I’m Victoria’s daughter; I never let myself forget that. Victoria was my mother (she died two years ago). She was a single mother, divorced, and became single after my father walked out on her. She couldn’t read or write. She struggled financially and she was poor after my father left, but the one thing she knew, was that she was not going to let me walk her path. And that’s who I am at the core.” 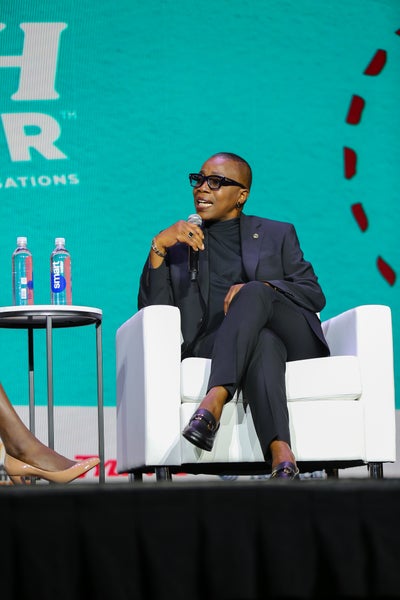 Though Dr. Wilson didn’t initially know that she wanted to be a doctor for sure, a word of discouragement from an uncle who told her at age 7 that women couldn’t be doctors proved to be all the motivation she needed to pursue a career in medicine. After getting into medical school at age 16 and completing medical school with the financial support of her mother, the future C-Suite executive began to identify her true calling to go even further than she —or her doubtful uncle—could have imagined.

“It was a hard life, doctors weren’t paid much; I didn’t have a lot of money,” she said. “I had actually very little money, but that started my walk, my search for answers. And, Caroline, something happens when as a young doctor in my early 20s, babies are dying, mothers are dying–something happens. It pushed me to search for more.”

Later on in the conversation, Dr. Wilson opened up about her own all-to-familiar quest to find the right doctor after she and her wife moved from New York to Texas. And not just any doctor, but one who cared to understand the unique healthcare needs for so many Black women whose identities sit at the intersectionality of race, gender, sexual orientation, and citizenship status.

“Most people are like me. I’m a Black, African, immigrant, lesbian, legally married and living in the state of Texas,” she said. “When my wife and I moved to Texas from New York, we needed a doctor. Who did we look for? A doctor who got us. A doctor who looked like us. A doctor who represented us in one way or the other. Somebody Black, female, LGBTQ…or maybe even white, male and not LGBTQ, but who is used to dealing with people like me.”

The conversation also heard the ladies discuss the Black maternal health crisis, how to empower yourself within the healthcare system, UnitedHealth Group’s $100 million commitment towards advancing diversity and equity in the clinical workforce over the next 10 years and much more. Hear the full discussion in the video above.

For more of everything you missed at the 2022 ESSENCE Festival of Culture, visit our official video content hub HERE.