Melbourne’s Clayton Oliver will remain a Demon for life after signing a monster seven-year deal with the club on Thursday. 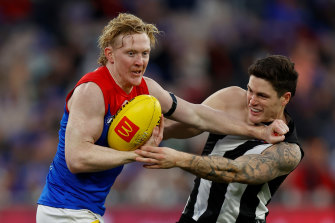 The premiership midfielder signed the mammoth long-term contract which will see him in the red and blue until at least the end of 2030.

Tyson Fury favourite to fight Deontay Wilder next in epic trilogy rematch ahead of Anthony Joshua, say bookies – The Sun