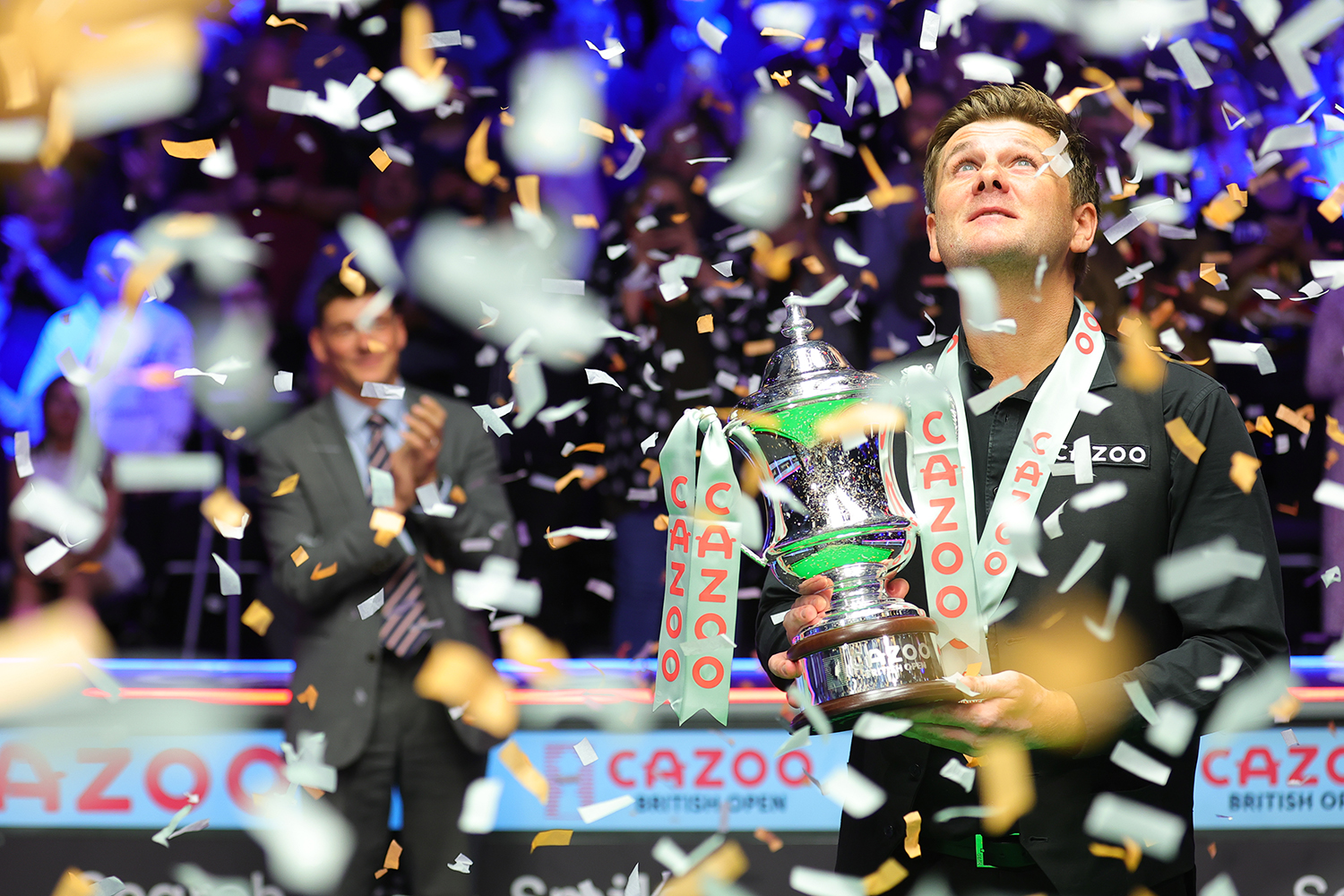 It was not long ago that Ryan Day was going through ‘dark moments’ and questioning his future in snooker but now he is back in the world’s top 16 after a superb British Open win on Sunday night.

The 42-year-old claimed the fourth ranking title of his career with a 10-7 win over Mark Allen in Milton Keynes, but significantly the biggest as he earned £100,000 with the victory over the Northern Irishman.

The win for the Welshman came somewhat out of the blue, with his only run to a semi-final or beyond in the last three seasons coming when he won the Shoot Out last year.

He admits that things had got really bad for him in the recent past, with last season’s UK Championship a specific low point, which saw him completely lose interest in the game.

Day lost 6-3 to Peter Lines in York and it ruined his confidence, but he credits working with coach Chris Henry to help him bounce back.

‘I lost in the UK last November and I just didn’t want to play anymore. Lost first round, played absolutely awful and just couldn’t face travelling,’ Day told ITV4 ahead of the British Open final. ‘I cut the practice right back to try to keep it fresh.

‘Started working with Chris, but started before I lost in November. That was another really dark moment in my career, but here I am in another big final and it can be a springboard for better things to come in the next few years.’

After beating the Pistol, Day told WST: ”I have had some horrific defeats and played some awful matches in the last few years and I was wondering whether the end was near.

‘But a win like this gives me at least another couple of years with a cue in my hand and hopefully there is more to come. Winning a big event like this shoots you up the rankings and I need to capitalise.’

Asked whether he doubted he would be getting his hands on another big trophy, Day told ITV: ‘Definitely, there’s been some really bad days. Quite a few and they come more often that they used to.

‘Just got to keep plugging away, and practice, maybe that’s the key for success?

‘I’ve played some good matches this week, and some pretty poor ones, but I’m going to be lifting the cup!’

Dynamite is up to number 16 in the world thanks to the big win, and has booked his spot in the Champion of Champions and the trio of prestigious ITV events later in the season.

He is also the first to lift the silverware that has been renamed the Clive Everton Trophy after the iconic journalist and broadcaster announced his retirement from editing magazine Snooker Scene.

Runner-up Allen was the hot favourite going into the final after knocking out the likes of Judd Trump and Mark Selby before thrashing Noppon Saengkham 6-1 in the semi-finals.

The Pistol could not quite keep up his level of performance in the final, although he was still impressive for much of the match, but he was full of praise for the champion.

‘Ryan fully deserved the win,’ said Allen, who climbs to number 10 in the world. ‘He looked super aggressive at the end and you have to go and win these tournaments, I just didn’t do that today.

‘It’s very early doors yet [in the season], my form’s decent and I’m getting my life in order off the table too, I’ve lots to be thankful for.