The GWS Giants had more than 4500 fans cheering them on at Ken Rosewall Arena last week when they outclassed the Collingwood Magpies in the Super Netball semi-finals.

On Saturday night, the tables will be turned when they travel south to face the Melbourne Vixens at John Cain Arena for a place in next weekend’s grand final against the West Coast Fever. 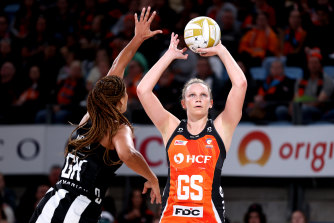 But according to Giants captain Jo Harten, silencing the opposition’s fans can be just as big a motivator as the cheers of your own support.

“Sometimes the best games to play are with a really boisterous crowd, and they go silent when you’re winning. That’s been some of the best moments of my career,” Harten said after last week’s semi-final win.

Harten will be hoping history repeats itself when she takes to the court on Saturday night, having been a part of the Giants side which beat the Vixens 65-57 in the 2017 preliminary final in Melbourne.

“One of the most historic victories our club has ever had was in 2017. We were in a similar position, went to Melbourne and really silenced them,” Harten said. 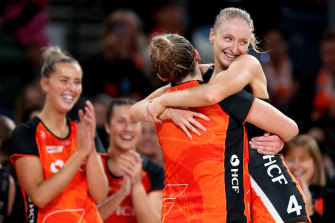 “For us, it’s not about, too much, focusing on the Vixens. We’ve got ourselves into this position because we have really stuck strong to our Giants’ beliefs … and we are going to throw absolutely everything at them.”

The last time the two sides met, in round nine of the regular season, the Vixens ran out 66-63 winners after extra-time in a game where their goal shooter Mwai Kumwenda scored 50 points and didn’t miss a shot all game. The Vixens go into Saturday’s final having won their past seven games.

Giants centre Maddie Hay, named MVP in last week’s victory over the Magpies, said her team wasn’t worried about their track record against the Vixens.

“We know that we can beat them. Even though we haven’t [this year], we have gone close enough that we know we’re in touch with them,” Hay told reporters on Thursday.

“We are used to the do-or-die games at the moment. We have had a really challenging season… We know that we need to get on top of the Vixens early because they are not a team that you can really come back from.”

The Giants’ lethal weapon this season has been Harten’s ability to optimise points during the power five, where every goal scored from the 1.9 metre zone is worth two points.

In their victory over the Magpies last week, Harten scored four of them, a crucial factor in her team’s comeback in the third and fourth quarter.

Ric Flair, 72, 'would rather die in ring' than spend another month in ICU and reveals WWE 'won't let me do anything'