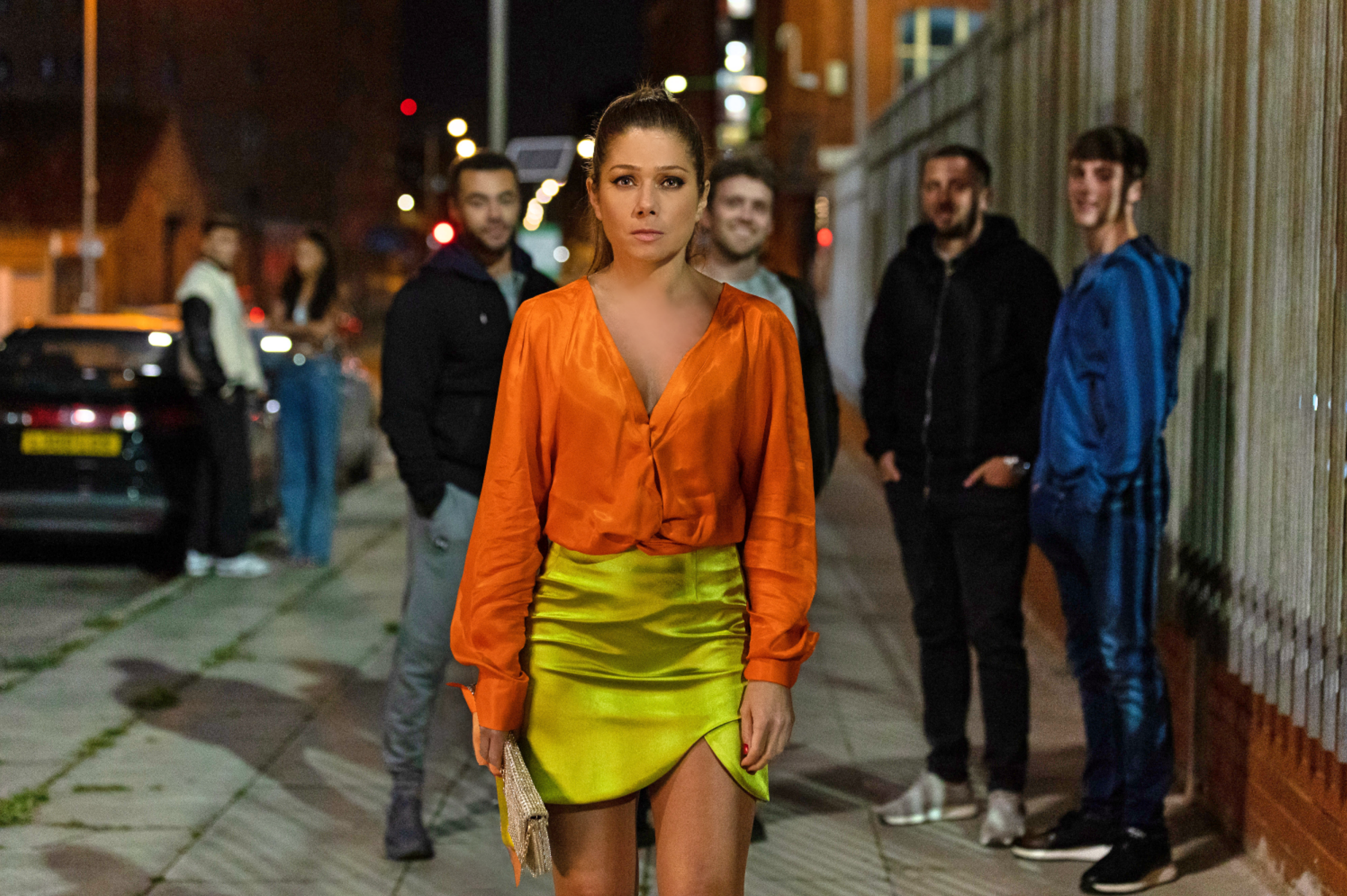 Maxine Minniver (Nikki Sanderson) is violently attacked in Hollyoaks next week during a special storyline that aims to explore women’s safety on a night out.

The hugely important episodes will see Maxine separated from her friends on the evening in question and will highlight the stark difference between women’s experiences on the walk home after a night out in comparison to men’s.

This concerns Tony Hutchinson (Nick Pickard), who has suffered a loss of customers due to the female boycott, and thus he draws up a plan to host a Ladies Night, roping Eric Foster (Angus Castle-Doughty) in to help.

The lack of women present at the venue, however, causes the boys to turn to drink, and Eric is on hand to make sure the drinks keep flowing!

Away from the village, Maxine, Theresa, Zoe and Verity enjoy a night out in Liverpool but things soon get messy when Verity sneaks a secret hip flask into the club and the girls remove their spiking bracelets.

Romeo gets worried for Theresa’s safety and sets off in search for her, but he is met with a frosty reception when he arrives.

Maxine, meanwhile, gets separated from her friends and is thrown out of the club, as Verity and Theresa mistake her for someone else.

The Long Walk Home episode, which airs on Monday (November 7) on E4, picks up from here, as Maxine navigates her way home alone without money or a mobile phone after the fun girl’s night out, ending in her being violently attacked.

The special outing of the Channel 4 soap will see her examine whether different choices she had made during the evening would’ve changed the outcome.

Romeo, meanwhile, travels back to Chester with a hen party he meets on his journey, and in The Dog, Diane (Alex Fletcher) joins Eric, Tom and Beau Ramsey (Jon-Paul Bell) for a drink.

But as the group discuss the girls night out, the difference in opinion highlights the sheer worries that women face.

The following day, the vicious attack on Maxine makes the front page news, while Maxine faces uncertainty on what to tell Minnie about her injuries.

Lizzie jumps to her defence when vile Eric criticises Maxine for being out late at night by herself, while Romeo tries to assist Max with her dropped shopping.

But, haunted by flashbacks, she has a heart-breaking reaction to his kind gesture.

Maxine subsequently tries to reclaim her power, as she organises a meeting at The Dog to make a tearful declaration, and – in an incredibly empowering scene – the women of Hollyoaks challenge certain men’s passive thinking when it comes to the issues women face on a daily basis.

Tony is left feeling guilty, and thus he comes up with an idea to deliver a message from the men of Hollyoaks. But will it prove to be enough?

Hollyoaks first announced this storyline back in July during a special press event attended by Metro.co.uk.

‘In autumn, we have a special episode, currently titled The Long Walk Home,’ Executive Producer Lucy Allan told us. ‘It follows Maxine as she becomes separated from a group of friends on a night out.

‘It replays several scenarios that sadly women will be all too familiar with; it’s about what can happen on a night out. That will be produced and crewed by an all-female team.’

‘‘When it was put in front of us in such a stark way, it felt really imperative that it was a story we got behind, and got behind with a character that our audiences knows and loves, but also recognises themselves in.’

'The Umbrella Academy': Vanya's 3 Biggest Changes in the Series vs. the Graphic Novels