The America’s Got Talent Season 17 auditions finally wrapped Tuesday, and as the episode cliff-hangingly concluded, the judges were still struggling to whittle this year’s 138 successful auditioners down to the supersized 55 acts — compared to previous seasons’ 36— that will compete for a Las Vegas residency and $1 million prize. Fifty-four of those contestants were announced later in the evening (scroll for the full list), while a remaining 55th spot will go to one of four wildcards that are currently up for public vote on the show’s social media platforms and official website.

But surprisingly, one of the standouts from this season’s final crop of auditions, octogenarian exotic dancer Penny Starr Sr., did not make the top 55… despite the naughty promise she made to cheeky judge Simon Cowell.

Penny, who at age 88 proudly bills herself as “America’s oldest burlesque dancer,” is clearly a national treasure regardless. A member of the Burlesque Hall of Fame who’s been dancing her “entire life” and is already familiar with Vegas stages from her annual appearances at Sin City’s Exotic World convention, the silver fox slinked onto the AGT stage Tuesday trailing red, white, and blue boa feathers, declaring: “I want to give America a real show, a get-up-and-go show!” The bumping-and-grinding grand dame then proceeded to shed those feathers, along with a few other lacy garments, to the spirited tune of “You’re a Grand Old Flag.”

The judges were delighted. Former Victoria’s Secret model Heidi Klum, herself an expert when it comes to working the stage in lingerie, excitedly cheered as Penny’s act climaxed with a blast of patriotic confetti. Fellow vixen Sofia Vergara gave Penny a standing ovation and told her, “I want to be you when I grow up!” However, Simon seemed the most impressed… and actually seemed to be flirting with Penny.

First, Simon asked the sassy senior citizen, who has been married six times, if she was looking for a new husband — almost as if he was volunteering for the position. (Her feisty answer: “Yes, but it takes a while to break them in!”) And then he asked her the bold question that would, presumably, determine her AGT fate.

“If you were to go forward, would more clothes come off?” Simon queried.

Sadly, however, Penny’s victory was short-lived, so we won’t be seeing more of her — at least not on AGT. Soon after her audition aired, NBC announced, via a press release, that she hadn’t made this season’s top 55 shortlist. But Penny ought to be the subject of her own biopic — Simon’s production company, Syco TV, really should get on that — because her life story is actually more incredible than most of the zany stuff that airs on America’s Got Talent. 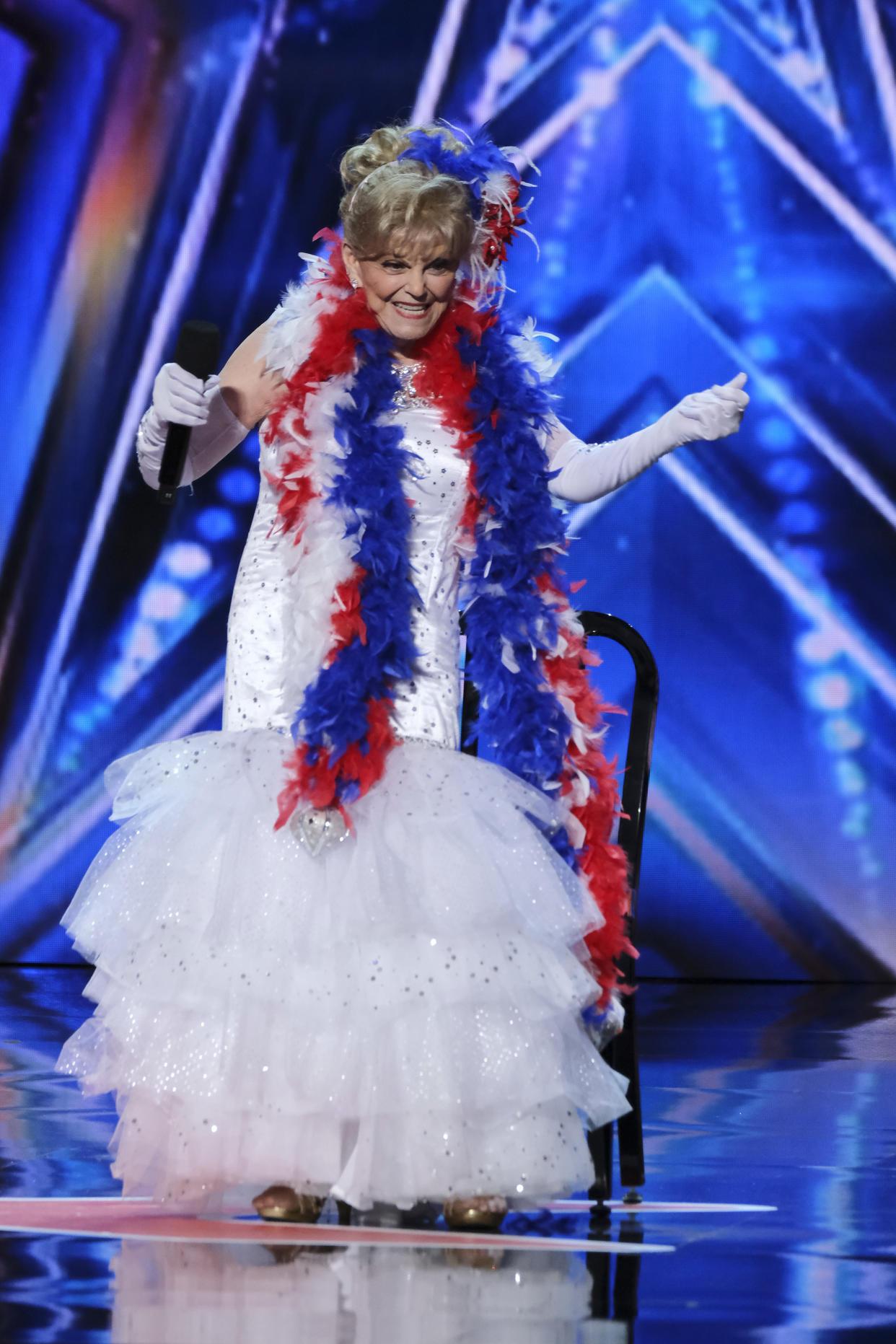 Born Janet Gaynor Colby in Allentown, Penn., this mother of two and former department store model got her start in show business in 1957 by literally joining the circus — doing a dangerous dance routine with a live elephant — before landing a steady gig at Florida burlesque club Guys & Dolls. Taking her stage name from the classic movie musicals Pennies From Heaven and A Star Is Born, she was eventually crowned Miss Bump-and-Grind at Atlantic City’s Cotton Club in 1963. And a star truly was born.

And Penny has passed the burlesque artform down to her granddaughter, Augusta Avallone, aka Penny Starr Jr., who at age 52 is a Burlesque Hall of Famer herself. The Starr ladies have even performed together in the past, so if the elder Starr keeps on bumpin’ and grindin’, perhaps she and Penny Jr. can try out for AGT together next year. I have a feeling Simon would not mind that one bit.

In the meantime, the four above-mentioned wildcards vying for a spot in Season 17’s live qualifying rounds are singers Ben Waites and Debbii Dawson, sword-swallower Auzzy Blood, and stand-up comic Jordan Conley. We’ll find out which of those acts will join this season’s six Golden Buzzer contestants (saxophonist Avery Dixon; singers Madison Taylor Baez, Sara James, and Lily Meola; Lebanese dance troupe Mayyas; and country trio Chapel Hart), along with the rest of the just-announced top 54 listed below, when the live shows commence next Tuesday.