Andy Cohen is giving Lisa Rinna her props after the 59-year-old actress announced her exit from The Real Housewives of Beverly Hills after eight seasons.

Rinna first joined the cast in season 5 and went on to quickly become a controversial, yet undeniable fan favorite. Initially, Cohen, an executive producer on the show, wasn't on board with Rinna joining the franchise. In a 2019 interview with the Los Angeles Times, Cohen said he "was wary of hiring a recognizable actress, feeling it would change the vibe of the show." Now, however, he "considers Rinna one of the best additions to the franchise."

"She’s fun to watch," he said. "She’s funny and she makes fun of herself. She understands her place in the world, and she’s very secure with herself. I just think she’s entertaining."

On Friday morning, Cohen took to his Instagram Story and posted a collage of Rinna drawn by DrunkDrawn, an artist who specializes in surreal Real Housewives artwork. "An iconic run…," the Bravo host wrote. 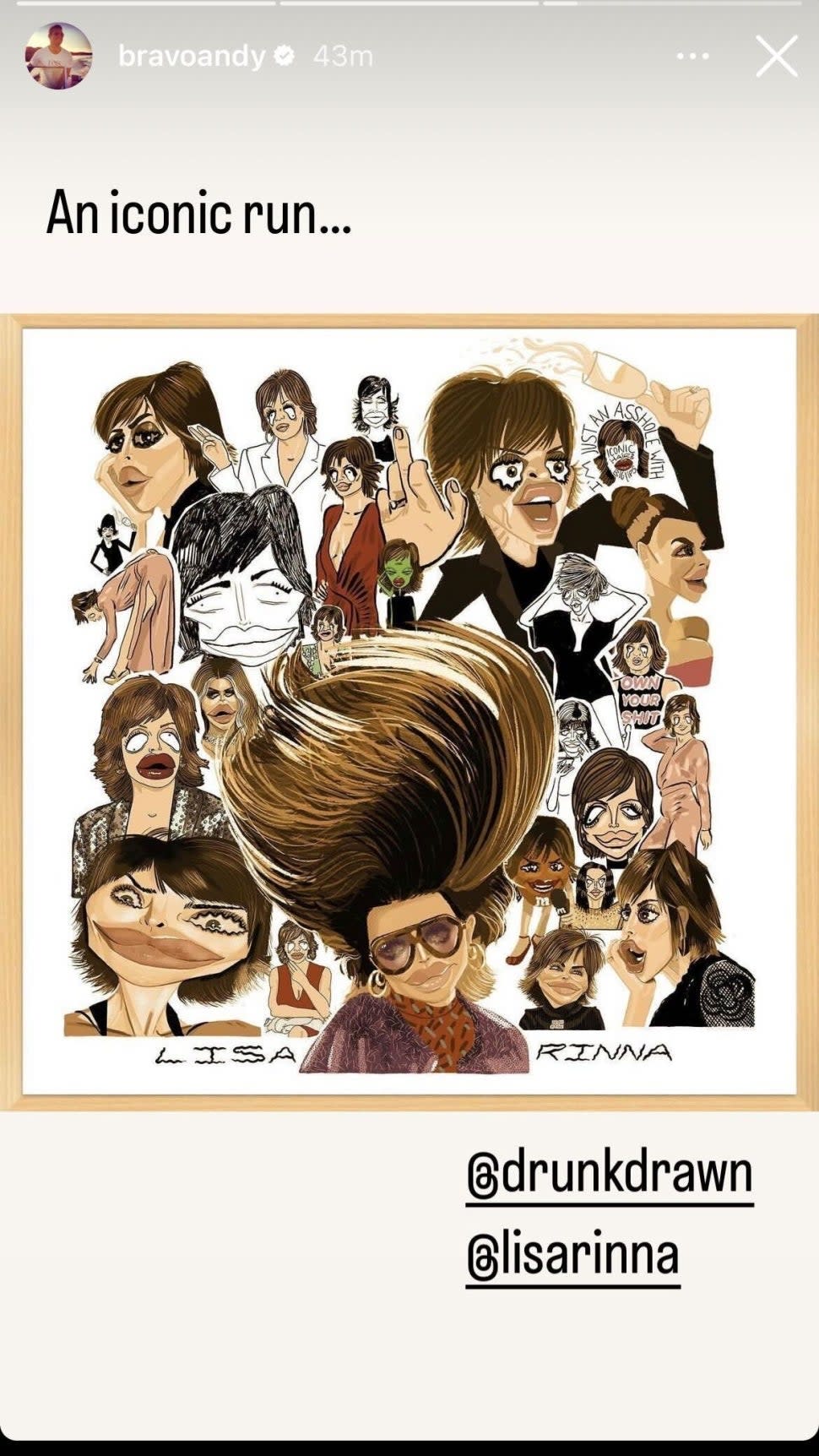 Rinna revealed she'd be leaving the Bravo series on Thursday, telling People, "This is the longest job I have held in my 35 year career and I am grateful to everyone at Bravo and all those involved in the series. It has been a fun eight-year run and I am excited for what is to come!"

While the show has been drama-filled for years, season 12 was a more personal one for Rinna, who lost her mother, Lois, just days into production. In part two of The Real Housewives of Beverly Hills season 12 reunion, Rinna was confronted with a look back at her journey over this past season, which included Rinna's outbursts at her fellow castmates, including Sutton Stracke. The former soap star was immediately emotional after the footage aired, breaking down in tears on the reunion couch.

"It's hard," Rinna said between tears, when Cohen asked how she's been. "It's really hard to come into a show like this, and maybe would've been better if I had taken the time off."

She continued, "When you're in that deep of pain — I've done the best I can. I'm sorry for being crazy and a maniac and screaming and doing what I've done. I'm really just trying to walk through life."

Cohen then brought up a question from a viewer who accused Rinna of using her mother's death as a scapegoat for her bad behavior. The fan asked the Bravolebrity what her excuse was for being as "disgusting" to Denise Richards, Lisa Vanderpump and Kim Richards in previous seasons as she was to Stracke this time around.

For more from Rinna's run on The Real Housewives of Beverly Hills, check out the video and links below.

Lisa Rinna Responds After Fans Boo Her at BravoCon (Exclusive)

Scenes of community spirit as mourners tear off plastic on flowers