Art dealer is ordered to pay £117,000 to cancer patients after using charity cash in bid to build 210ft-tall statue of a Welsh dragon instead

A Welsh fine art dealer has been order to repay more than £110,000 he raised in the name of a cancer charity by a High Court after it was found he used the money to campaign for a giant 200-ft dragon statue to be built instead.

Simon Wingett, 66, was taken to court by the Charity Commission over allegations that he used the money donated to the Frank Wingett Cancer Relief Fund, of which he was sole trustee, to fund his tourist attraction project instead.

Mr Wingett claimed the building of the Welsh Dragon statue, dubbed a rival of the Angel of the North, would result in eventual fundraising for local cancer charities. No statue has been built to date.

It was found he had funneled £410,000 into the statue project, with no payments being made to local cancer services since 2011.

The charity’s shop in Wrexham closed in 2018, but its last charitable donation was paid to Betsi Cadwaladr University Health Board in 2011 and amounted to £4,500.

He has now been ordered to repay £117,100.32 which, subject to recovery, will be distributed by the Commission to local charities supporting the relief of cancer patients treated in Wrexham.

He was also ordered to pay almost £10,000 to cover the Commission’s legal costs. 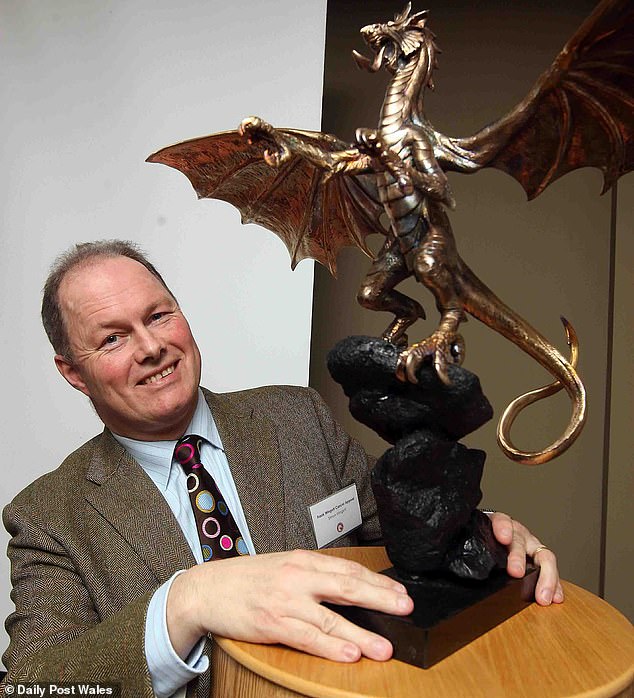 Simon Wingett, 66, pictured with a model of his vision for the statue, which has never been built 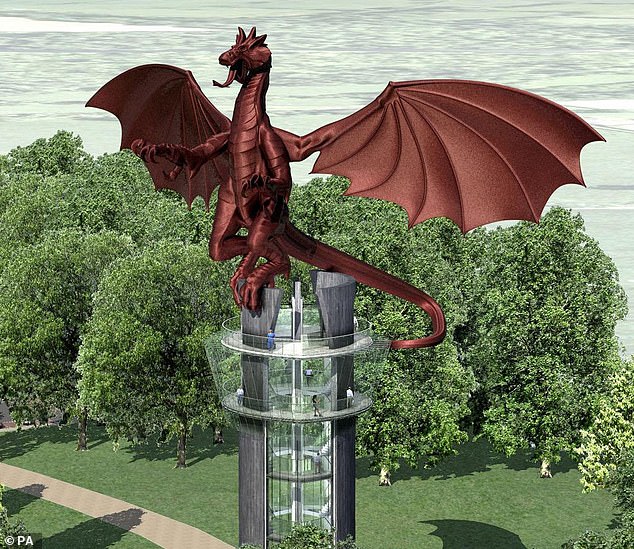 The Frank Wingett Cancer Relief Fund was set up for cancer patients in Welsh hospitals in the Wrexham area, and was supposed to raise money for medical and surgical equipment and facilities.

It was named after Mr Wingett’s father, the founder, who died from throat cancer in 1988.

But an investigation by the Commission was launched in 2017 after it was revealed funds had been used to support the building of a 210-ft statue of a Welsh dragon near the A5 in Chirk, Wales instead.

At this point the charity had not filed its annual reports for three years.

Mr Wingett, who is employed as a fine art dealer and advisor, claimed that should the statue be built, it would deliver around £1.5million in charitable donations for local cancer charities.

But according to the Commission, the statue ‘has no connection to advancing the charity’s aims and to date, no statue has been built.’

Following the investigation Mr Wingett was disqualified from acting as a trustee or senior manager in any charity in England or Wales for 10 years.

The Charity Commission has since pursued the recovery of misappropriated funds and it was announced today that it had succeeded in a High Court case earlier this month.

To date, Mr Wingett has been director of five different companies associated with the dragon statue which have since been dissolved. These include Dragon Sculpture Ltd, The Dragon Foundry Ltd and The Dragon Experience Ltd.

Its latest company accounts, registered in January 2022, show payments owed of £15,336 to S Wingett and S J Wingett for profits made by the company.

Tracy Howarth, Assistant Director of Casework at the Charity Commission, said: ‘Charity trustees hold important positions of trust. We – and the public – expect trustees to ensure financial decisions are taken in the best interests of the charity and those it serves to benefit.

‘Mr Wingett’s significant misuse of funds was an abuse of the trust placed in him by the many donors to the charity.

‘This ruling will ensure the charitable proceeds raised are now directed to the benefit of those in the local community they were intended for.’

Mr Wingett has been the driving force behind a campaign to build the giant Welsh dragon, billed as a tourist attraction, since 2010.

The project was valued at around £6million in 2010.

Who was 5-year-old Cannon Hinnant and why is Darius Sessoms accused of killing him?