I was born into a Catholic family of 12 children during the Vietnam War. 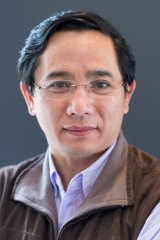 The fall of Saigon happened when I was six years old. My family and most families in the south of Vietnam were faced with great fear, despair, uncertainty and poverty. Many people who (like my family) worked for or had any link with the previous government were arrested and their families subjected to maltreatment and hardships. Their properties and land were taken away and adults were forced into labour for the government.

Life became unbearable. Although only a child, I also had to become a labourer, working in rice fields and tending livestock.

In this difficult situation, faith became important. Every day I went to our local church at 4am to attend the Eucharist and, when the day was over, I went to church again to pray the rosary with the community at 6pm. The community worship times kept us together as a people of faith and gave us hope that life would be better one day.

While most of my siblings and friends dropped out of the very basic school system, I managed to finish high school thanks to my parents’ encouragement and support. However, because of my family’s background, I did not “qualify” for tertiary education.

At the age of 18, I did not see any light for my future. My father did not give up hope for me but always encouraged me by saying that God would one day show me a way. After a year of working as a farmer, that “one day” came when the Brothers of Saint Joseph in Nha Trang opened a training centre.

I didn’t learn any new skills there, because the government closed it down soon after opening, but I met some of the Brothers and grew interested in becoming a missionary. I applied to join them but had to remain underground during my five years of formation. I professed my vows in 1994 and was assigned to work in a rural area, teaching the faith to thousands of children.

In 1998, I was sent to Australia for further theology training. Here in Australia I have enjoyed a life of freedom and opportunities for which I give thanks to God. After eight months learning English I started my academic pursuits and have now graduated with three Master’s degrees, a Bachelor of Theology and, last year, a PhD in religious studies at Monash University. I was ordained a priest in the Divine Word Missionaries in 2004.

Father Thien Nguyen is the director of the Janssen Spirituality Centre specialising in Comparative Theology of Religions.