The EU is set to repeat its Covid vaccine shambles with a failure to deliver monkeypox jabs.

Doctors are having to turn away patients because of a lack of doses, with the bloc’s collective procurement policy stalling again.

While the UK has ordered more than 100,000 monkeypox vaccine doses, Eurocrats have procured just 160,000 for its 27 members. 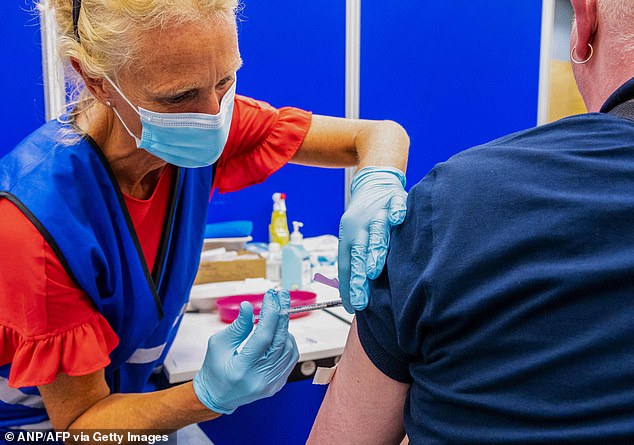 The EU created a new health body, HERA, after it failed to secure Covid vaccines at the same speed as countries like the UK. Pictured: A person receives a dose of the Monkeypox vaccine at the GGD Haaglanden in The Hague in the Netherlands

Dr Jean-Christophe Goffard, of the Erasme Hospital, in Brussels, said: ‘The vaccine is not available in Belgium at the moment.

‘We’ve had a growing demand for tests… and close to 90 per cent prove positive.

‘We don’t have the impression we are currently able to control the epidemic well.’

The EU’s two biggest powers, France and Germany, have turned their backs on the EU scheme and are buying their own vaccines.

France has had enough delivered to target around 250,000 people. Germany also bypassed the EU to order 240,000 vials.

The EU created a new health body, HERA, after it failed to secure Covid vaccines at the same speed as countries like the UK.

An EU spokesman said a joint procurement of jabs was ‘being prepared’.

Former Brexit minister David Jones said: ‘The bloc’s cumbersome bureaucracy… has once again been shown to lack the nimbleness enjoyed by the newly-independent UK.’

‘Are they really going to do that?’: How the doors closed on Madame Brussels