‘If you see a lady with short curly hair that’s my great grandma’: Eight-year-old girl’s tear-jerking letter to the Queen telling her to look out for her ‘Dede’ and saying she hopes she is reunited with Prince Philip

A little girl has written a tear-jerking letter to the Queen telling her ‘if you see a lady with short curly hair, her name is Dede then that is my great grandma’.

The heartfelt message was nestled in between the sea of flowers being laid down for the late monarch at Green Park following her death last Thursday.

Written by an eight-year-old girl, the sweet tribute is in memory of her gran who ‘followed the life of her Queen until she sadly passed away a few months ago’.

The note said they were now ‘reunited together’. 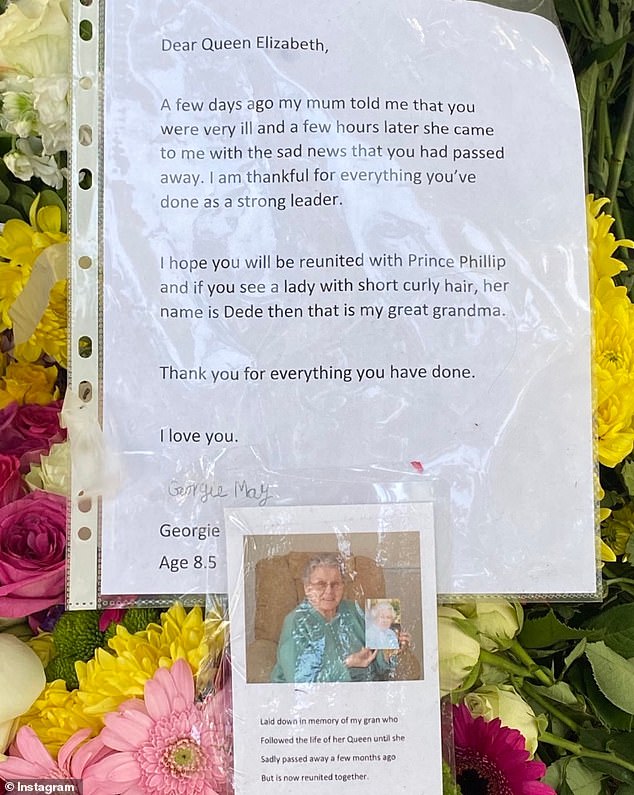 The tear-jerking note, left by eight-and-a-half year old girl, was laid down in memory of her gran who was a life-long fan of Her Majesty but sadly died a few months ago

‘A few days ago my mum told me that you were very ill and a few hours later she came to me with the sad news that you had passed away.

‘I am thankful for everything you’ve done as a strong leader.

‘I hope you will be reunited with Prince Phillip and if you see a lady with short curly hair, her name is Dede then that is my great grandma.

‘Thank you for everything you have done.

Below the photograph is a polaroid picture of the little girl’s gran smiling while holding up a picture of Her Majesty.

It said: ‘Laid down in memory of my gran who followed the life of her Queen until she sadly passed away a few months ago but is now reunited together.’ 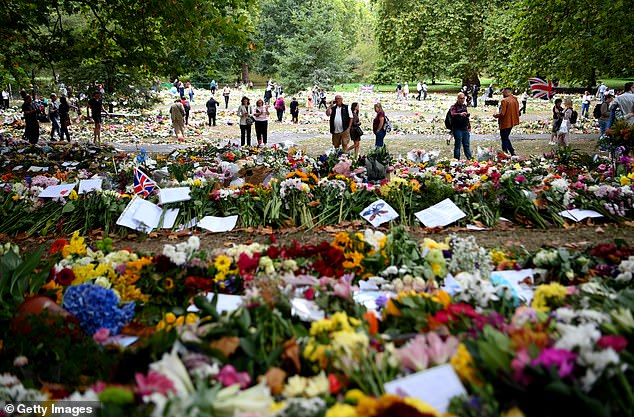 Tens of thousands of people have now laid down flowers and other tributes to Queen Elizabeth II in Green Park, central London

The note was posted on social media by a mourner who had travelled to Green Park on Tuesday to pay their respects to Her Majesty, who died ‘peacefully’ at her Balmoral estate last week.

They accompanied the picture with the caption: ‘Well, this tribute in #Greenpark finished me off…! #queenelizabeth #kingcharles3’

The sea of tributes including flowers, cards, soft toys, drawings, Union Jack flags and balloons in Green Park keep pouring in as the steady stream of people travelling to the capital to express their condolences continues.

In emotional scenes last night, tens of thousands of well-wishers lined the streets and applauded as the Queen’s coffin was transported by state hearse from RAF Northolt to Buckingham Palace for one final time.

Crowds of up to one million are expected to travel to the capital from today to see the Queen’s coffin lying in state at Westminster Hall until her state funeral on Monday, September 19.

Large queues have started to form along the Embankment as people wait for the Queen’s lying-in-state to begin. Her Majesty’s coffin will be moved from Buckingham Palace during a poignant procession to Westminster Hall later today.

The procession will see members of the Royal family, including King Charles III and Princes William and Harry, walk behind the coffin as it is carried on a gun carriage.

7-Year-Old N.C. Girl Is Fatally Shot, Allegedly by Man Who Was Released from Jail Hours Earlier

Fauci was warned that COVID-19 may have been ‘engineered,’ emails show