‘Jesus, enough with the Queen!’ Howard Stern slams ‘excessive’ media coverage of monarch’s death – and says it should get back to ‘Trump and where those papers are that they found at Mar-a-Lago’

The remarks came during a scathing speech delivered by Stern on the Monday edition of his eponymously named SiriusXM radio show, where he criticized publications for seemingly ditching the story of the embattled ex-president housing classified documents at his Florida home in favor of coverage of the Queen’s death.

The world has been in collective mourning since the passing of the UK’s longest reigning monarch on Thursday, who died surrounded by members of the Royal Family at Balmoral Castle from natural causes at age 96.

A funeral for the historic leader -who assumed the throne at just 25 years old in 1953 upon the death her father George VI – has yet to be held, but that did not stop Stern, 67, from suggesting it was time for outlets to move on to a fresh news cycle.

Scroll down for video: 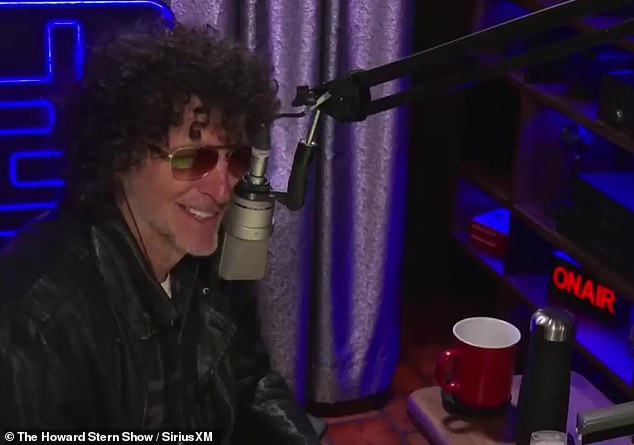 Howard Stern slammed the US’s coverage of Queen Elizabeth II’s death in an on-air tirade Monday, calling it ‘excessive’ and suggesting outlets instead refocus on the ongoing investigation into former President Donald Trump

‘It’s weird traditions and everything,’ Stern tells co-host Robin Quivers in a clip from the Monday edition of The Howard Stern Show, after the Queen’s passing was briefly brought up, causing the aging television personality to fly off the handle.

‘And I’m like, Jesus, enough with the Queen!’ Stern suddenly says in the footage, before adding, ‘I mean, it’s America.’

Stern, meanwhile, last week unloaded on Trump supporters by branding them ‘morons’ for defending the embattled ex-president amid the ongoing federal investigation, calling America a nation of ‘nincompoops.’

That spiel saw the longtime radio host suggest Americans who champion Trump ‘go live in Russia,’ to get a taste of a different type of political system aside from American democracy.

Bizarrely claiming that he was still ‘somewhat of a Republican,’ Stern said that he’s ‘sick’ of people who buy into former President Donald Trump’s ‘bulls**t,’ calling the general US population as ‘stupid,’ and ‘just dumb.’

With those opinions in mind, Stern tore into American media for covering the queen in lieu of the continuing scandal, which has continued to make headlines for the past several weeks. 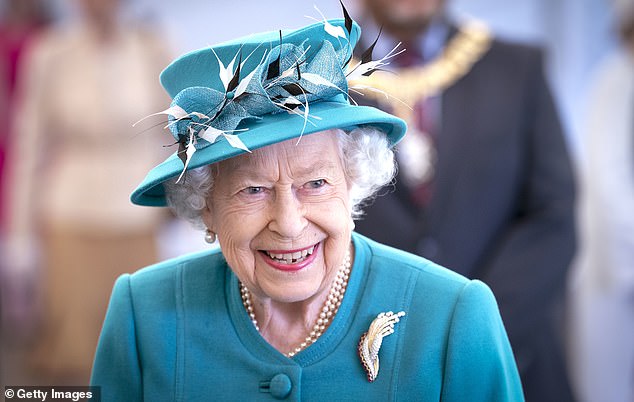 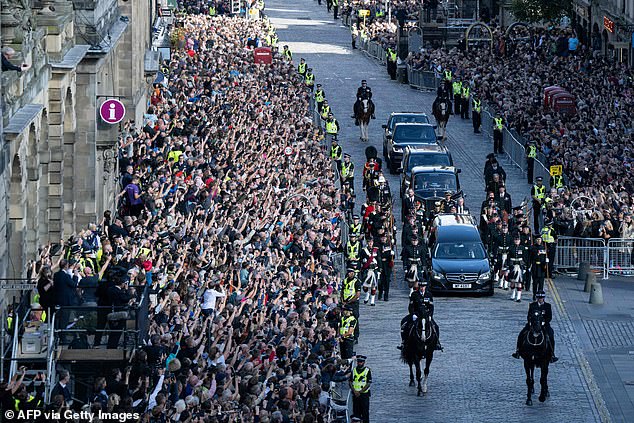 The world has been in collective mourning since the passing of the UK’s longest reigning monarch on Thursday. Pictured is the procession of the late Queen ‘s coffin, from the Palace of Holyroodhouse to St Giles Cathedral in Edinburgh on Monday

Stern’s tirade this Monday, meanwhile, saw him concede that the Queen – whose 70-year reign is only surpassed by that of Louis XIV, who ruled France for 72 years – has played a crucial to her own country, but that that importance is lost on Americans, who should be focused on more pressing matters, such as the Trump investigation.

‘We don’t have a queen. I get it. You know, [the] Queen was a nice lady,’ Stern tell his co-host in the clip, attempting to offering some conjectural basis to his rant.

‘I guess she was born, you know, my whole life,’ Stern stammers.

‘The queen has been the same queen and there’s a tradition there and she did her duty to her country. 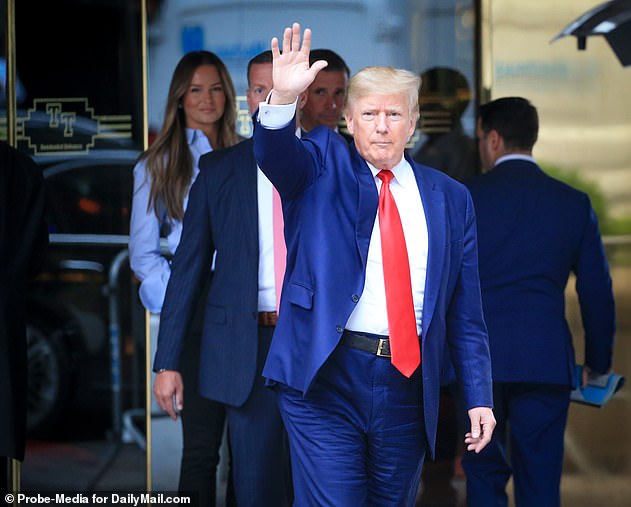 Stern said outlets should instead focus on the DOJ’s investigation into Donald Trump, after  branding supporters of the ex-president as ‘morons’ last week amid the ongoing federal investigation, calling America a nation of ‘nincompoops’

At that point in the discussion, co-host Quivers asked if Stern was bothered by the fact that the Queen has become such a large point of discussion in American discourse.

‘You don’t like the distraction of the queen?’ Quivers asks his colleague.

‘No, it’s like, annoying,’ Stern responds, proclaiming that instead, ‘everyone wants to hear about Trump.’

Amid the Justice Department’s ongoing investigation into allegations that Trump urged his supporters to storm the Capitol on January 6, 2021, to stop the coronation of then President Elect Joe Biden, Stern has criticized the former president on several occasions, and has even hinted at running against him in 2024.

‘The problem with most presidents is they have too big of an agenda,’ he said earlier this year. ‘The only agenda I would have is to make the country fair again.’

Stern previously attempted to run for New York governor as a libertarian in 1994, but was reportedly forced to drop out after refusing to reveal his personal finances.

The radio host said he would get rid of the Electoral College and add five new Supreme Court Justices if ever elected.

‘I’m not f**king around, I’m really thinking about [running for president],’ he said at the time.

Stern, like Trump, has long been a fixture in the New York community, and spoke Monday about rubbing shoulders with the Manhattan-based mogul prior to his successful presidential run in 2016.

Doubling down on prior criticisms of the ex-president as a politician, Stern bizarrely slammed Trump for wanting ‘to be the focus of attention’ – despite his previous assertions that the media is not covering the embattled head of state enough.

‘I mean, he, you know, it’s so weird. I knew Donald for so many years, not in touch with him now, obviously, but the only thing that I used to say about Donald — the guy just wants to be the focus of attention.’

He went on” He wants the whole world looking at him and the son of a gun — If he didn’t make that happen, it’s unbelievable. He got his wish.’

Less than a week ago, in a blistering attack on Trump, Stern slammed supporters of the political newcomer as ‘morons’ and called America is a nation of ‘nincompoops’ – while also claiming he is ‘somewhat of a Republican’.

The Tuesday rant saw Stern assert that that he’s ‘sick’ of people who buy into the former president’s ‘bulls**t’ – especially as he faces potential charges that he hindered a federal investigation by hiding and deleting documents that may prove he played a part in the January 6 insurrection.

‘I mean, my God in heaven, I feel like I’m in a nation of nincompoops. I’m hoping there is still some more brilliant, bright, vibrant people who love this country,’ he said on his Sirius show.

‘I feel like the people in this country who support all this nonsense and lies about the election and all the conspiracy theories, they have never lived under a dictator,’ he explained, noting, ‘Their freedoms have never really been threatened.’

The former America’s Got Talent host proceeded to bring up his late immigrant father, Ben, who came to the US for ‘freedom.’

‘Freedom is why people came to this country, and now so many people are willing to now walk away from freedom,’ the multimillionaire said.

He said their ‘freedoms have never really been threatened and they have no idea what it would be like to live under a different type of system other than democracy.

‘They don’t get it. They are morons. They think somehow that the world would be better under a guy like Trump. Like he would take care of them better.’ 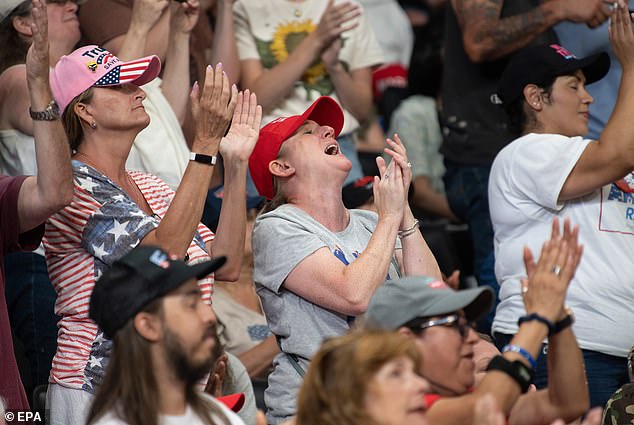 He went on to add that he wished that they would ‘go live in Russia under that f**k nut Putin’ for a year to learn what ‘misery’ is actually like.

Overall, the self-branded ‘normal conservative’ suggested that most Americans are just ‘dumb,’ regardless of political affliction.

Trump denies the judge’s ordered pause on the DOJ investigation is ‘a prohibition on conducting a national security assessment,’ after the government claimed such a halt would harm national security

Trump’s attorneys suggest he even had the power to declassify documents after leaving office, which is untrue, by stating: ‘The former President has sole discretion to classify a record as personal or Presidential’

He also suggested his former friend’s supporters don’t even have ‘half a brain’ since they ‘follow the f**ing fearless leader blindly.’

He revealed he considers himself ‘somewhat of a Republican,’ but a ‘normal’ one.

The months-long controversy surrounding Trump centers on the discovery of hundreds of pages of classified documents at his Florida club in Mar-a-Lago more than a year after he left the White House.

It is one of several criminal investigations that have plagued Trump since the end of his presidency, all associated with his alleged role in last year’s attack on the capitol.

Many contend that the documents could shed light on the president’s actions and orders to staff during the insurrection, which Trump has tried to distance himself from since being unceremoniously ousted from the White House and impeached at the end of his term.

Under the Presidential Records Act, Trump was required to turn over the documents to the National Archives – an action the ex-president for some reason never went through with.

Earlier this year, the FBI learned later Trump had held on to the documents – despite the National Archives’ repeated efforts by to retrieve them – triggering a criminal investigation.

As part of that probe, the FBI executed a search warrant at the Mar-a-Lago premises on August 8, seizing nearly 13,000 items and documents, including more than 100 documents bearing classified markings. 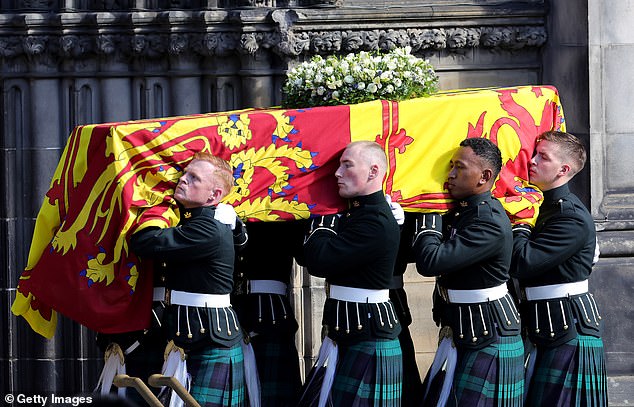 The historic leader -who assumed the throne at just 25 years old in 1953 upon the death her father George VI – has yet to be buried, but that did not stop Stern from suggesting it was time for outlets to move on to a fresh news cycle

The Justice Department and the Trump legal team have since been at odds on when access to the documents and the appointment of a special master to peruse their contents, with Trump’s team Monday asserting that they do not want the FBI to go over the trove of potentially damning presidential records.

Lawyers for the former president said Monday that they oppose allowing the Justice Department to resume reviewing the more than 100 classified government documents.

They instead asked a federal judge last week to lift an order barring Trump’s legal team from viewing the documents – and authorizing the appointment of an appointed third party, known as special master, to assess the seized files.

Those talks, at the moment, are still underway.

The Queen, meanwhile, will lie in state at Westminster Hall from Wednesday at 5pm until 6:30am Monday 19 September, the day of the state funeral.

A ceremonial procession is due to take place, which will see the Queen’s coffin travel from Buckingham Palace to the Palace of Westminster for the lying in state. Her coffin will be closed and will rest on a raised platform, called a catafalque, in the hall and will be draped in the Royal Standard with the Orb and Sceptre placed on top. It will be guarded around the clock by a vigil of units from the Sovereign’s Bodyguard, the Household Division, or Yeoman Warders of the Tower of London.

Buckingham Palace has yet to confirm what time the vigil will take place and which royals will attend the event, though it is believed that it will take place before the late monarch’s lying in state opens to the public that evening.

Bitcoin, crypto soar, decouple from stocks as Russia-Ukraine moves from bad to worse