Draghi, the former European Central Bank president credited with saving the euro during the 2010 eurozone crisis, has led a unity government since February 2021. 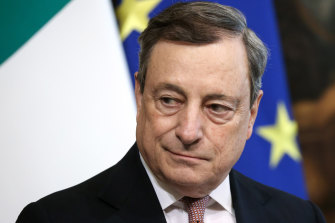 The crisis in the European Union’s third-largest economy was triggered when Five Star leader Giuseppe Conte refused to back the government’s €23 billion ($34 billion) package of economic aid for families and businesses, arguing Draghi was not doing enough to tackle the cost of living crisis.

Even though the government comfortably won Thursday’s vote in the Senate, the prime minister had raised the stakes in past days by saying that without Five Star’s support, the government could not continue.

It was unclear if President Sergio Mattarella would accept Draghi’s resignation or urge him to return to parliament to seek a follow-up confidence vote. 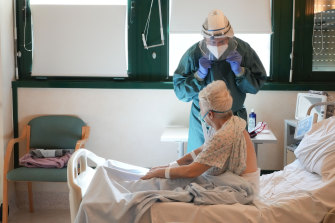 Italy, one of Europe’s COVID-19 hotspots, was hit particularly hard by the pandemic.Credit:AP

The 74-year-old was appointed last year by Mattarella to save Italy from its endemic instability and lead the post-pandemic recovery.

In a statement on Friday morning (AEST), Draghi said the trust that had sustained the unity government had gone.

“The majority of national unity that had supported this government since its creation is no longer there,” Draghi said.

“From my inauguration speech, I have always said this executive would only go forward if there was a clear prospect of being able to carry out the government program on which the political forces had voted their confidence. Those conditions no longer exist.” 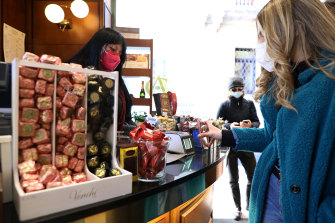 The Italian economy – like most economies worldwide – is struggling to recover from the pandemic, while also being hit afresh by a cost-of-living crisis.Credit:Bloomberg

Elections were due early next year, but Draghi’s resignation means they could be held early as September or October.

Five Star was originally the largest party in the coalition, but has seen a string of defections and falling support. Former party leader Luigi di Maio has accused the party of a cynical plan to bring down the Draghi government to revive its own support, while dragging Italy to economic and social collapse.

As prime minister, Draghi was credited with helping to revive the battered economy and with supervising an effective coronavirus vaccine rollout.

However, his response to Russia’s invasion of Ukraine sparked new domestic political tensions given Italy’s historically close ties to Moscow.

Draghi took a strong stand against the war and was a driving force in pushing for tough EU sanctions against Moscow. His foreign minister, Luigi Di Maio, a member of Five Star, has stood firmly behind him.

But Conte, who preceded Draghi as prime minister, has openly questioned whether military aid to Ukraine was perpetuating the war.

Tensions erupted last month when Di Maio walked out of Five Star, taking about a third of the party’s lawmakers with him, and reaffirming support for Draghi’s government.

Conte said he could no longer support Draghi’s cross-party government, which he accused of not doing enough to help families facing surging food and energy costs.

“I have a strong fear that September will be a time when families will face the choice of paying their electricity bill or buying food,” Conte said.

‘On my own terms’: Why vaccine mandate protesters are in Canberra