A group of furious farmers and landowners in the crucial seat of Melton are throwing their weight behind a campaign against a high-voltage power line they claim would cause mental stress and poorly impact the electorate’s rural areas.

The group is pushing for the power lines to run underground and are hoping to use the oxygen of the fierce battle for the seat to push the project back to the drawing board, claiming the Andrews Labor government are not taking their concerns seriously. 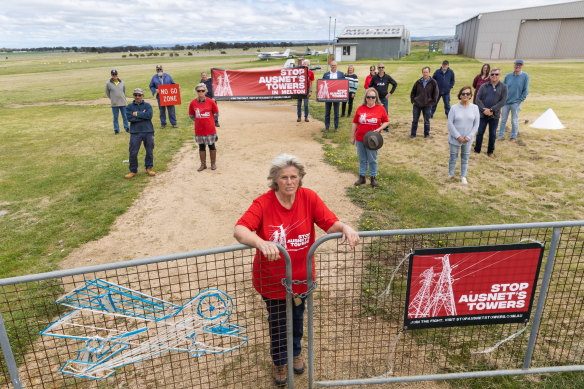 Barbara Ford, Plumpton farmer on the outskirts of Melton, pictured with other locals unhappy about the proposed Ausnet power lines.Credit:Jason South

Melton has been held by Labor since it was created 30 years ago, but is a real prospect of changing hands on November 26. It is held by Labor with a 5 per cent margin under newly redrawn boundaries.

The Western Renewables Link – a state-government project being delivered by AusNet – is a proposed 190-kilometre, overhead high-voltage electricity transmission line with hundreds of towers that will carry renewable energy from wind farms in the state’s west to Melbourne.

The “Stop Ausnet Towers” and “Piss Off Ausnet” groups which include landowners from Melton right through to Ballarat and potato-growing areas near Daylesford, have organised anti-Ausnet and anti-Labor signage through Western Victoria.

Protestors brought Ballarat to a standstill in July when 70 tractors drove through the main street in protest.

“Around Moorabool they’ve got ‘Piss off Ausnet’ ploughed into their hills. So they’re pretty militant the Ballarat farmers,” said Barbara Ford, a farmer from Plumpton, on the outskirts of Melton, who has organised dozens of affected landowners in her area.

The route of the transmission line stretches from Bulgana in Western Victoria to Sydenham in Melbourne’s north-west and cuts through the marginal seat of Melton close to sporting fields, the local pony club, the Melton airfield, a new high school and about 15 to 20 private properties.

Earlier this year Ausnet put forward an alternative route after community uproar, but Ford’s group was not appeased.

She said locals feel their concerns about the safety and impact of the project were not being taken seriously by Ausnet or the government.

No Labor representatives turned up to the Ballarat tractor rally when Liberals and Independents did.

The Stop Ausnet Towers group has launched legal action against the Australian Energy Market Operator citing “fundamental flaws” in the planning process for the project.

Landowners have been told they will be reimbursed for the lost value on property, but residents in Ford’s group are sceptical of the process.

“This isn’t just a case of ‘not in my backyard’,” says Ford.

“The mental stress that is being inflicted on the community is unacceptable.”

Sitting Labor MP Steve McGhie said he “has concerns” about the project and had a preference for the power cables to run underground.

“But that’s not going to resolve it for the whole of the line because I don’t believe it will go underground all the way along,” he said.

“So we’ve got to come up with the most appropriate outcome.”

Liberal candidate Graham Watt told The Age here would “be no Ausnet towers through Melton” but has not specified whether that means rerouting or undergrounding.

Leading independent candidate Dr Ian Birchall said he supported renewable energy but had concerns about the environmental impact, and that rerouting, under-grounding and better right of access provisions needed to be considered.

A spokeperson for AusNet said it was considering “partial undergrounding” and its findings would appear in the forthcoming environment effects statement.

“The Western Renewables Link is critical infrastructure that will deliver clean and affordable energy to more than half a million Victorians, as the state transitions away from coal-generated electricity,” they said.

“This project is urgently needed to reduce congestion on the existing transmission network in western Victoria, which is now at capacity, and will help keep the lights on and place downward pressure on wholesale electricity prices.”

This story is part of our in-depth local coverage of the key seats of Melton, Hawthorn and Richmond at the November state election.

Inside City Builders, the Pentecostal sect with lofty political goals

Italy cable car crash: Boy, 5, is only survivor after cabin plunges down mountain