So, Justice Michael Lee has found that Clive Palmer and Mark McGowan defamed each other.

Well, of course they did. 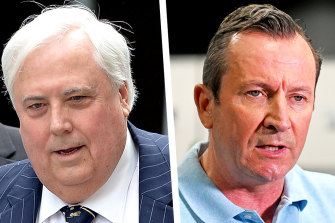 But that the damage to either’s reputation was so inconsequential as to award each man paltry monetary compensation.

In fact, the premier’s reputation was likely enhanced, Lee found. He used his bully pulpit and formidable political skills to make it so.

The judge didn’t say this, but I will: thrown into the bargain was the creation of the central political argument that saw West Australians deliver Anthony Albanese the Lodge. So, well played, premier.

The judgment defied McGowan’s pre-trial boast that this ludicrous case – brought by the serial litigant Palmer, to be sure – would result in the Queensland billionaire writing the taxpayers of WA “a big cheque”.

Instead, the pair were chastised for wasting the court’s limited time and resources.

“The game was not worth the candle,” Lee said.

“These proceedings have not only involved considerable expenditure by Mr Palmer and the taxpayers of Western Australia, but have also consumed considerable resources of the Commonwealth.

“At a time where public resources devoted to courts are under strain, and judicial resources are stretched, one might think that only a significant interference or attack causing real reputational damage and significant hurt to feelings should be subject of an action for defamation by a political figure.”

The real stakes are for taxpayers remain: the as-yet undetailed and unawarded legal costs. McGowan refused to reveal the total spent on the lawyers’ picnic on Tuesday but promises he will detail it once the matter is finalised at a further hearing on August 11.

A relevant consideration, Lee said, “will be the glaring disproportion between the damages awarded and the extent of legal expense”.

The premier says he respects the court and its decision.

While a man of law, Lee is also an astute political observer.

“Unusually, in this defamation case involving a public figure, whose ‘approval’ was regularly the subject of assessment, there is some apparently cogent, objective material in evidence upon which one can base conclusions as to reputation,” Lee said of the premier.

McGowan was “Mr 89 per cent” and then went on to win 53 of 59 seats in the Legislative Assembly in the 2021 state election, while increasing his majority in his own seat of Rockingham to 37.7 per cent, achieving a swing that made it the safest in the state.

“As the coverage Mr McGowan celebrated with [Seven West chairman Kerry] Stokes revealed … they provided a common foe against which Mr McGowan could unite West Australians. As Mr McGowan accepted, Mr Palmer was someone with whom Mr McGowan was ‘happy to have a blue with’.”

This was always the primary purpose of the premier’s particular reaction to Palmer’s provocations.

Asked yesterday why he didn’t use parliamentary privilege to launch his attacks, the premier avoided the question.

“I didn’t bring the action, I can’t control what other people do,” was his non-sequitur answer.

Of McGowan’s attorney-general, John Quigley, who set himself on fire in the witness box then got himself a do-over, Lee said: “Regrettably, his evidence was both confused and confusing … During his cross examination, however, Mr Quigley gave contradictory evidence.

“With respect, Mr Quigley’s second appearance in the witness box just added to the brume of his testimony.

“Even though his return was at his request, for the purpose of correcting ‘mistakes’, Mr Quigley misstated his previous evidence he said he wanted to change.

“My comment at the time was that I considered Mr Quigley’s evidence was not dishonest, but was ‘all over the shop’. I adhere to this view.”

Lee rejected the submission of Palmer’s lawyers that Quigley’s evidence should be thrown out for being deceitful and intentionally misleading.

“It is worth stressing that being a confused witness is quite a different thing from being a dishonest one … it appears Mr Quigley had limited time to prepare himself for the giving of evidence.

“Whatever the combination of reasons for Mr Quigley’s confounding testimony, I do not think any are malign. It suffices to note that Mr Quigley was not a reliable historian of events.”

How can the state’s chief law officer give evidence on a matter in which he was so intimately involved that is so unreliable that a Federal Court judge considers it unsafe to rely upon?

We are to believe that Quigley was both the mastermind of the ingenious poison pill strategy – so much so that by his own SMS admission the newly single AG was up at 4am plotting it rather than “making sweet love” – to stymie “the fat man” Palmer, yet also confused, confusing, contradictory and unreliable?

He is the attorney-general, for goodness’ sake. His position is untenable.

Not that he was the only unreliable witness in this case.

Of Palmer, Justice Lee observed the “indefatigable litigant” “carried himself with the unmistakeable aura of a man assured as to the correctness of his own opinions”.

Though he displayed “obvious intelligence” and was “across the relevant detail”, he was “generally a combative and evasive witness who on more than one occasion was unwilling to make obvious concessions”.

Lee has a sense of humour (he would have to).

Of Palmer’s claim he feared for his life after McGowan declared him an “enemy of the state”, his belief the Premier had granted himself “a licence to kill”, the judge said: “to even his most rusted-on partisans, Mr McGowan would be unlikely to have been thought to resemble Ian Fleming’s fictional MI6 character James Bond”.

“Overall, my impression was that Mr Palmer was often willing to fashion his evidence to suit what he perceived to be best for his case,” Lee concluded.

“After reflecting upon his evidence generally, I reject the submission that Mr Palmer ‘maintained his equanimity’ and made ‘concessions where appropriate’. I do not consider it safe to place any significant reliance upon Mr Palmer’s evidence.”

McGowan did not bring this case, it is true, but the bottom line is this has been a monumental waste of everyone’s time and money.

Imprudent commentary outside the absolute protection of parliamentary privilege inflamed the defamation risk as part of a political strategy that paid astonishing dividends in a time of general fear and loathing.

Next week, we will discover the sum of the bill that is due.

Escape from Kabul: one woman’s perilous path to freedom

'The Crown,' 'Mandalorian' top Emmy nominations with 24 each