A senior NSW minister says the state government should consider using more private capital to bankroll its major infrastructure pipeline as new analysis suggests close to $50 billion worth of big projects can be financed privately.

As the NSW government prepares to push back several mega projects amid rising construction costs and wider economic uncertainty, the state is being urged to consider using more private cash, including superannuation, to deliver on its big building promises. 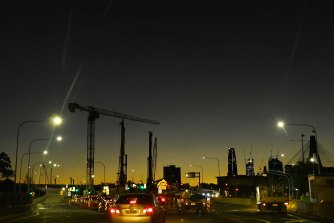 Close to $50 billion worth of projects in NSW could use private funding, according to new research.Credit:Kate Geraghty

Infrastructure Partnerships Australia, an industry think tank, estimates $48 billion worth of projects could be built using private capital in NSW, and $83 billion nationally.

Infrastructure Minister Rob Stokes said he was open to the idea of using private sector money to finance the state’s big builds if it made sense.

“We should be activating private capital to help us build transformative infrastructure sooner,” he told the Herald.

“The benefit of private capital means we can build infrastructure faster at lower cost to government. Of course, the trade-off is that the costs will need to be repaid by users over time.”

While the NSW government has used private capital to fund infrastructure in the past through public–private partnerships (PPPs), including the Sydney CBD light rail, most of the state’s big builds have been publicly funded.

“It’s almost become a cliché that we need to get more super and private capital invested in Australian infrastructure, but clichés don’t fund projects, dollars do,” Dwyer said.

“If governments are serious about this ambition, they need to start routinely considering the use of private capital in major infrastructure projects.” 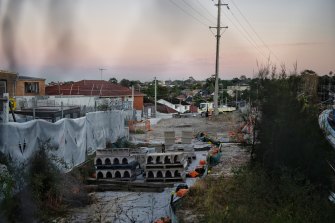 Construction on Sydney Metro City has stalled amid a protracted industrial dispute.Credit:Nick Moir

The report said a “concerted effort” was required to develop policies that increased private cash being invested into big builds.

University of Sydney Institute of Transport and Logistics Studies adjunct professor Martin Locke said while he believed the IPA analysis was setting a “high bar,” it showed the potential private financing was huge.

“[INSW] is saying we need to increase the usage of private financing to help us deliver infrastructure moving forward, yet you look at the statistics and the statistics show that that is not happening,” he said.

“So to some extent the sort of analysis that IPA has put out is quite provocative, because the number of projects that they say are suitable for being candidates for public-private partnership is almost mind-blowing.”

Projects singled out in NSW by the IPA analysis include the Sydney Metro West maintenance and operations as well as several Metro stations across the city.

The Great Western Highway upgrade, the second stage of the Parramatta light rail and Bankstown-Lidcombe Hospital were also identified.

Road projects present the biggest opportunity for private capital investment across Australia, according to IPA, with a $26 billion pipeline, while rail infrastructure is slated at $9.7 billion.

While the recent INSW report recommended the government push back the second stage of the Parramatta light rail, it will push ahead with the project over coming years.

However, it is expected to delay the construction of the controversial Northern Beaches Link and any major upgrades to the Great Western Highway.

INSW recommended the state’s $27 billion infrastructure spend be diverted to smaller projects that will provide “high returns and faster paybacks with less budget and delivery risks”.

British schoolboy, 11, is blackmailed into cutting his own wrists

Labour MP says he was 'regularly touched up' by older colleagues