Across the nation, our top sporting coaches are realising old is gold. It’s who they turn to when the going gets rough. Across codes and regions, our leading sport wranglers are choosing the elderly to get them through.

A key part of a win built on catastrophes and after 10 years of squadding, Cadeyrn Neville made his debut for the Wallabies against England last weekend, at the age of 33. Our chief rugby writer Georgina Robinson says Neville, formerly an elite rower, was always fit for purpose. He was just getting ready for his big chance, watching and waiting, practising in his head. Bam. “At the age of 33 he’s shown you can continue to get better at the back end of your career,” she says. 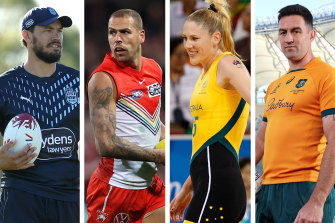 At 30 and competing with a team of youngsters, Jordan McLean had probably given up on making the NSW Blues, our rugby league heroes set to demolish Queensland. Yet here he is, ready to fire. Lauren Jackson is 41, 41 and making a comeback for the Opals.

Jake Niall, our chief AFL writer, is slightly abashed when he remembers his 2013 prediction big bloke Buddy Franklin, glorious Swans crusader, would struggle to make it to the end of his nine-year contract. Yet here is Sir Lance, 35, kicking a lot and getting yet another year on his contract. His slightly less famous (don’t hate me, Geelongites, Pivotonians) AFL colleague Tom Hawkins is playing his best season ever. At 33.

What can we learn from this? Let me introduce you to Leanne Cutcher, professor of management and organisation studies at the University of Sydney’s Business School, who is wildly enthusiastic about this particular sporting trend.

As she puts it, sport is about teams and team building, same as every other workplace. We’ve got a dramatic shortage across roles and sectors so let’s use everyone we can!

Sure, 30 to 41 (the spread of ages in my completely unrepresentative sample of ageing sports stars, haven’t mentioned St Roger of the Slams or Tom Brady, rampaging quarterback and probably most valued NFL player of all time) isn’t what we would normally call old – but it’s old in context.

Now, apologies for kicking back to Buddy, but I’m not sure a 20-year-old could have handled thousands of screaming fans running on to the ground to celebrate, as Franklin did the day he kicked his 1000th goal. That’s composure right there, exactly what we’ll see when Lauren Jackson takes to the court, all that experience feeding muscle memory.

And it’s what older workers should be able to offer across a range of industries. But research tells us that ageist stereotypes and perceptions about older workers stop us from keeping and getting work.

The Australian Human Rights Commission released a report last year which found ageism remains the most accepted form of prejudice in Australia. Nearly two-thirds (63 per cent) of workers reported experiencing ageism in the last five years. And if you’re 63 it would have happened in the last five minutes.

What’s worse is that coworkers’ perception of what constitutes old is going in the wrong direction. The Australian HR Institute’s (AHRI) survey on employing and retaining older workers reveals that in 2014, 12.5 per cent of respondents considered an older worker to be someone aged between 51 and 55. Last year that figure jumped to nearly 17 per cent.

As AHRI’s chief executive Sarah McCann-Bartlett wrote: “We’re slowly progressing towards an ageing workforce that has, according to our data, never looked younger.”

Which is weird because the same survey showed most respondents expected to retire somewhere between 66 and 75.

Most of us aren’t elite rowers as our back-up talent, unlike Cadeyrn Neville, but we do our very best to stay fit for purpose. As for ageism, a little poke to those idiots at South Sydney (the rugby league club I’ve followed since I was a girl), who this year let Adam Reynolds go. Poor bloke was ageing, apparently. Now watch the old guy go.

Armed Forces banned from paying for prostitutes while overseas