New York: Donald Trump’s company is licensing its name for a golf resort in Oman in the first of what the company hopes will be several overseas deals, raising conflict-of-interest issues after the former president announced a possible third run for the White House.

The Trump Organisation said the licensing deal – the first since Trump left office – is with Saudi developer Dar Al Arkan and will include a golf course, hotel and thousands of residential units in the Oman capital of Muscat. 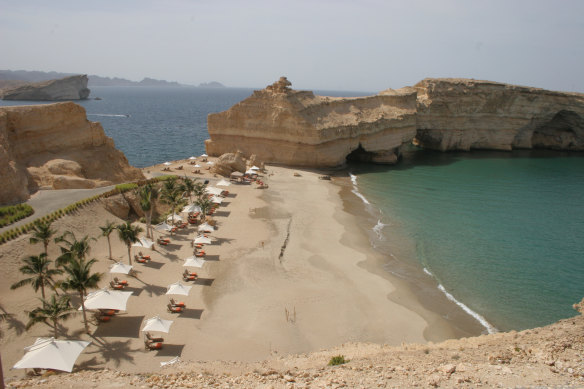 A resort beach in Muscat, Oman.

Trump’s son Eric, who oversees the company’s global real estate interests, told The Associated Press before Trump’s announcement that the company was no longer bound by a self-imposed restriction not to make foreign deals while his father was president.

“You can expect more hotel and golf deals overseas in the future,” Eric Trump said in a text exchange.

Trump announced on Wednesday (AEDT) that he was running again for the presidency in a speech from his Palm Beach, Florida, club.

Trump’s company struck many real estate licensing deals overseas before he entered the White House, including for hotels and residential towers in Canada, Dubai, Mexico, India and Turkey. Some branding experts had expected him to put his name on more buildings after he left office, with the added brand appeal of a former US president. 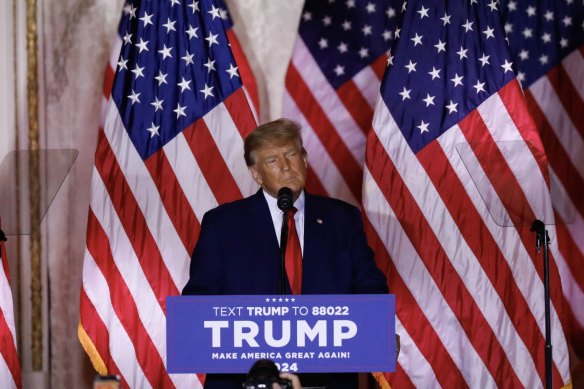 Former US president Donald Trump announcing his bid for re-election in 2024.Credit:Bloomberg

With Trump running again, the company may feel pressure to move fast to add to the Oman deal. Asked if the company would halt such deals if his father was elected, Eric Trump responded, “Why would we do anything differently?”

The New York Times, which first reported the deal with the Saudi developer, said the $US1.6 billion ($2.37 billion) Oman resort would have an estimated 400 hotel rooms and 3500 residential units.

Trump’s close ties to Saudi Arabia’s ruling crown prince drew heavy criticism following its blockade of US-ally Qatar during his administration and the killing of Jamal Khashoggi, a Washington Post journalist critical of the regime.

Since leaving office, Trump has hosted two tournaments at his properties for the upstart Saudi-funded LIV Golf series that critics say should not be given a venue in the US given the regime’s human-rights record. Trump’s son-in-law and former senior aide, Jared Kushner, has also drawn scrutiny from Democrats for a reportedly $US2 billion investment from a Saudi sovereign wealth fund for his investment fund started after he left the White House.

Unlike Trump’s build-and-own ventures earlier in his career, licensing offers a relatively easy and risk-free way to generate cash assuming his brand remains strong. Before his 2016 election, Trump’s real estate licensing deals generated as much as $US30 million in revenue in 17 months through May of that year, according to financial documents he had to file as a candidate. Much of that revenue was profit since it was Trump’s partners who owned the businesses and bore the costs, not him.

Just how much is profit is unclear, but Trump’s longtime finance chief, Allen Weisselberg, told Businessweek in a 2015 interview that the company overall made about 50 US cents on every $US1 in revenue, thanks partly to licensing. Since the Trump Organisation is private it is nearly impossible to confirm those figures.

How rare is YOUR 50p? Royal Mint reveals most coveted 50p coins