Migrant, 18, was forced to say goodbye to his emotional support dog at US border after pair trekked across several countries and tropical jungle together to reach Texas entry – fluffy pooch was gift from dead mother

A Venezuelan teenage migrant’s journey to the United States-Mexico border endured a heartbreaking moment when he had to separate himself from the pet dog who accompanied him on his long journey.

Brayan Pinto, 18, and his small fluffy white dog, Brandy, traveled through several Central and South America countries, a treacherous tropical jungle in Panama, and all the way north through Mexico in order to seek asylum with the United States government.

Brandy was given to Pinto two years ago by his mother before she passed away.

The petite pooch and Pinto, along with his uncles, walked across a shallow part of the Rio Grande to turn themselves over to the U.S. Border Patrol in El Paso, Texas, on Sunday when he learned that he could not do so with Brandy in tow. 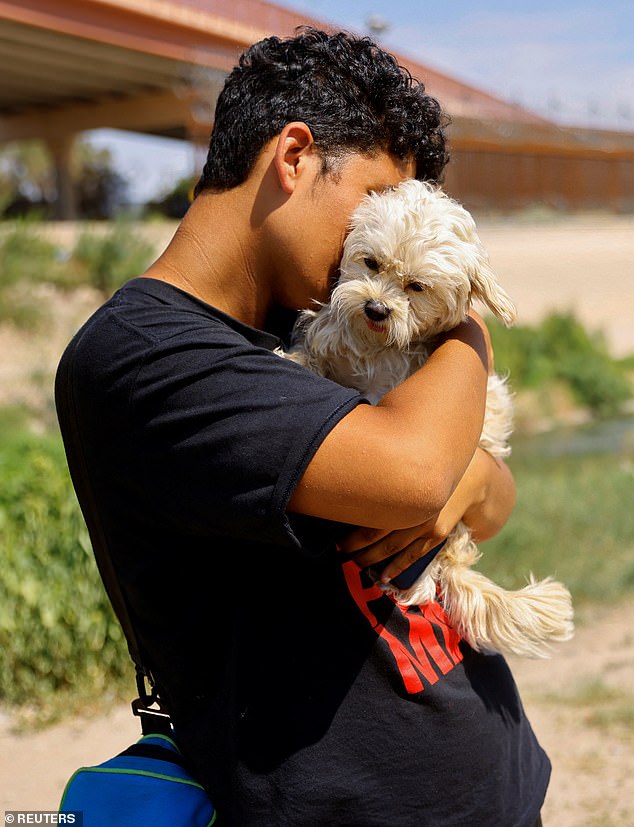 Venezuelan national Brayan Pinto, 18, hugs his pet dog Brandy after he walked from El Paso, Texas to Ciudad Juárez, Mexico on Sunday to leave his pooch with a local photographerHe nestled his face into her curly fur for a final farewell before turning himself in 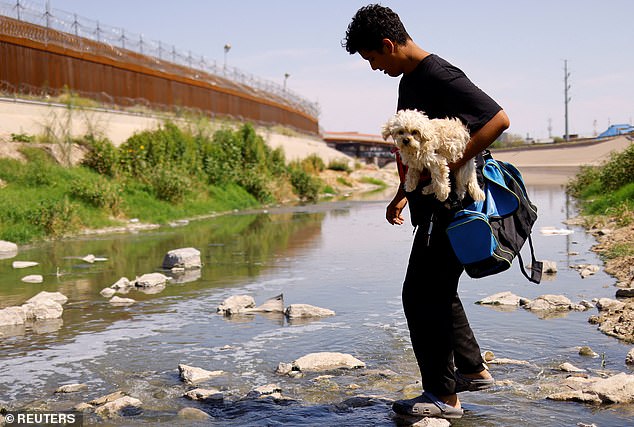 Brayan Pinto received his pet dog Brandy two years ago as a gift from his mother before she passed away in their native home of Venezuela. The dog kept Pinto company as he made the long journey north to reach Texas

Pinto then walked back over to Ciudad Juárez in order to find the dog a temporary home. There, he came across Carlos Sánchez, a photographer with the local newspaper El Diario de Juárez and father of two girls, who agreed to open his home to Brandy while Pinto finds a way to be reunited.

‘They tell me that I have to leave her, because you can’t cross to the other side, that they do a lot of helping us to help the puppies too,’ Pinto said, as quoted by El Diario de Juárez.

In an email statement to DailyMail.com, U.S. Customs and Border Protection said that the agency follows guidance from the Centers for Disease Control and Prevention in admitting dogs and other pets into the United States.

According to the CDC, ‘all dogs must appear healthy upon arrival. Dogs that arrive sick or injured will be required to undergo veterinary examination and testing at the importer’s expense to rule out diseases that can spread to people.’

Dogs are required to be vaccinated against rabies if they are brought from one of the high-risk countries.

‘If the pet’s owner is an inadmissible noncitizen in DHS custody and an animal’s owner does not transfer possession to family or friends, U.S. Customs and Border Protection works with local officials from animal health services, such as a local humane shelter, to see if there can be placement for the animal while its owner remains in custody,’ CBP said in a statement.

Pinto’s relationship with Brandy strengthened after his mother gifted him the dog – a mix of Pekingese and toy poodle – before her death two years ago. Since then, Brandy has become his emotional support pet. 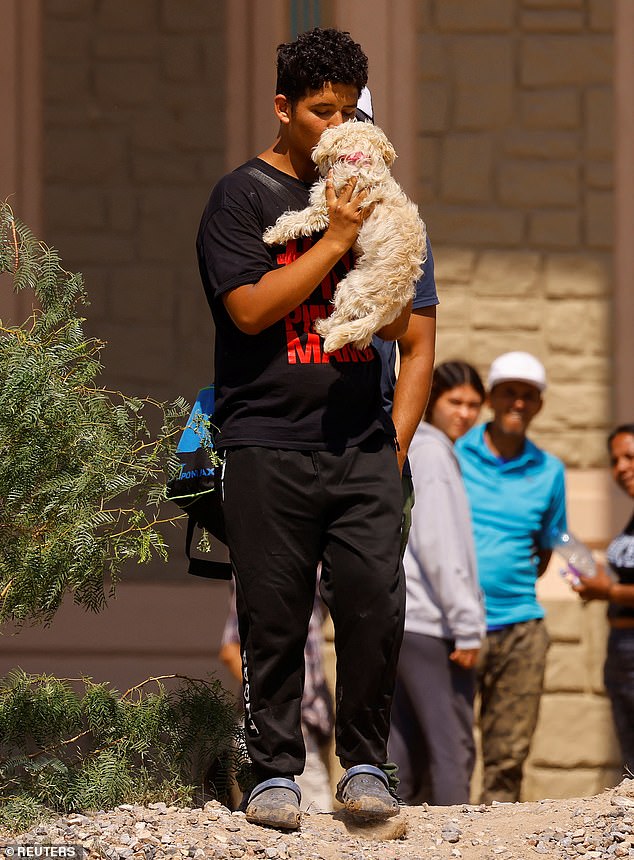 Brayan Pinto, an 18-year-old migrant from Venezuela, says goodbye to his dog Brandy after crossing the Rio Grande to turn himself in to U.S. Border Patrol agents to request asylum in El Paso, Texas 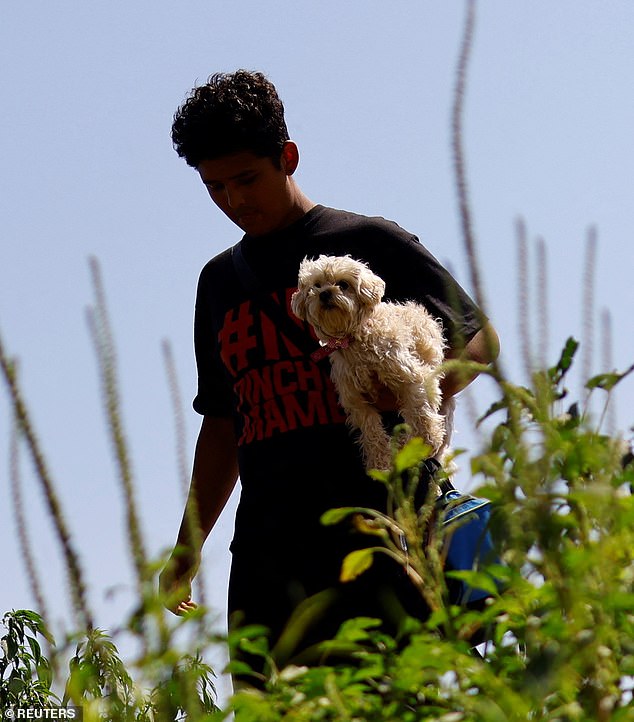 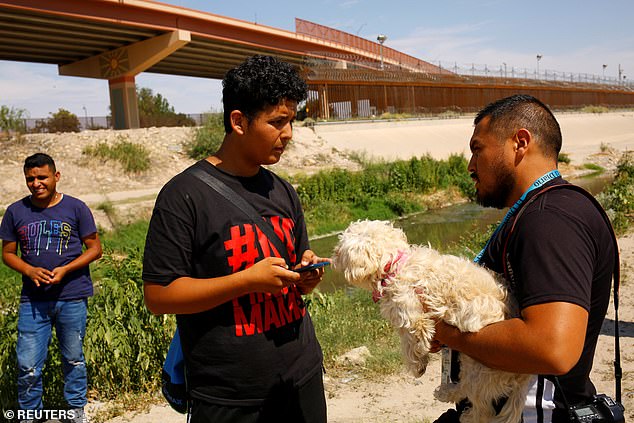 Venezuelan migrant Brayan Pinto (center) left Brandy with Carlos Sánchez (right), a photographer with the El Diario de Juárez newspaper. Pinto says he will make arrangements to be reunited with his pet in New York once his asylum process is being handled by U.S. immigration authorities

Pinto and family members started documenting their odyssey to the southern United States border region in August when they opened a TikTok account for his dog.

The account, under the user handle of @brandysp_, highlighted the group’s trip across Ecuador, Colombia, Panama, Costa Rica, Honduras and Guatemala.

TikTok videos show Brandy walking with his human family, playing with other dogs and sitting patiently on long bus rides.

Pinto recalled the most grueling part of their journey – a nine-day trek through the notoriously dangerous Darien Gap between Panama and Colombia.

He sadly put Brandy into the arms of Sánchez and nestled his face into her curly fur for a final farewell before turning himself in. 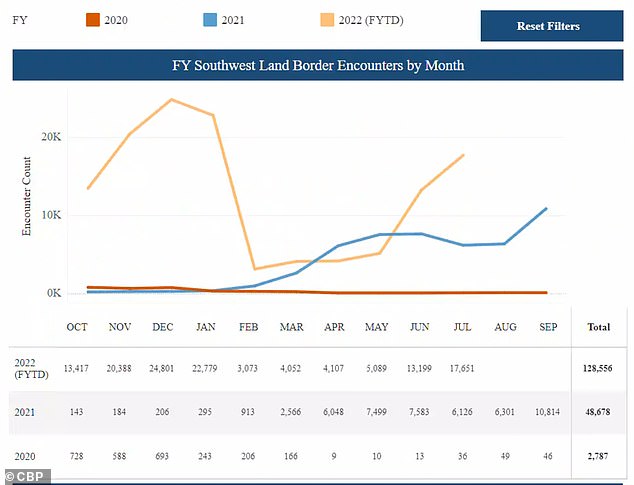 U.S. Border Patrol agents have reported 128,556 encounters with Venezuelan migrants who have crossed the United States-Mexico border without legal documents in fiscal year 2022

Pinto is among the nearly 7 million Venezuelans who have left their homeland since 2014, when an economic crisis took hold of the country of some 28 million people.

The majority have gone to nearby nations in Latin America and the Caribbean, while others have risked their lives by crossing the United States-Mexico border.

The huge migration slowed as the pandemic cut economic opportunities and complicated travel across the region and as Venezuela’s socialist government adopted reforms that slowed the country’s economic free-fall and gave some appearance of revival.

About 150,000 Venezuelans returned to their homeland at the height of the coronavirus pandemic, according to United Nations’ estimates, and some host countries reported a decline in the overall count of Venezuelan immigrants for the first time in years.

According to CBP data, U.S. Border Patrol agents have reported 128,556 encounters with Venezuelan migrants who have crossed the United States-Mexico border without legal documents in fiscal year 2022 – which spans from October 1, 2021 to September 30, 2022.

Missing Noah Gabriel Trout, 2, found after he was 'taken from Virginia nursery by unknown woman’