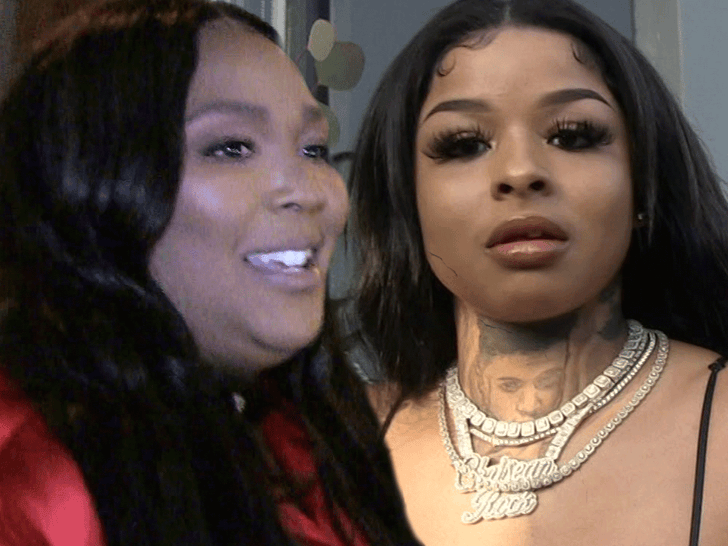 Lizzo dressed up as Blueface‘s girlfriend, Chrisean Rock, for Halloween this year — but the getup is catching some backlash … because some perceive CR as someone not to mock.

Lizzo trotted out a costume Friday that was, no doubt, meant to recreate Chrisean’s look — missing tooth and all — and while it was in good fun … there’s been a lot of reactions online that aren’t in favor of it and are actually condemning turning Chrisean into a Halloween gag.

The reason … many feel like Chrisean isn’t in the healthiest relationship as it pertains to Blueface. There’ve been much harsher terms used to describe their sitch.

Fact is, Chrisean and Blueface are in constant ups and downs — either fighting or loving up on each other … sometimes in explosive fashion. It’s made for some great entertainment on the internet, but there’s also been much concern for Chrisean these past several months.

The latest twist in their rocky relationship … it’s all being documented for a new show, “Crazy in Love,” which has sparked controversy in and of itself. Some see it as exploitative.

With that in mind … there’s a good portion of bird app users who are taking offense to Lizzo’s cosplay, as they feel she’s making fun of someone who they see as needing help.

FWIW, Chrisean herself appears to dig it … she’s retweeted/commented on Lizzo’s videos. Of course, there’s also the usual fatphobic crowd clowning Lizzo over this … but their hate is pretty much white noise at this point. Not even Lizzo is letting it get to her anymore.

We should also mention — there’s a lot of people who are loving Lizzo’s Chrisean costume, and find it hilarious. Depends on which side of the coin you land on, we suppose. 🤷🏽‍♂️

Dominic West and Lily James 'were kissing on flight to Rome'