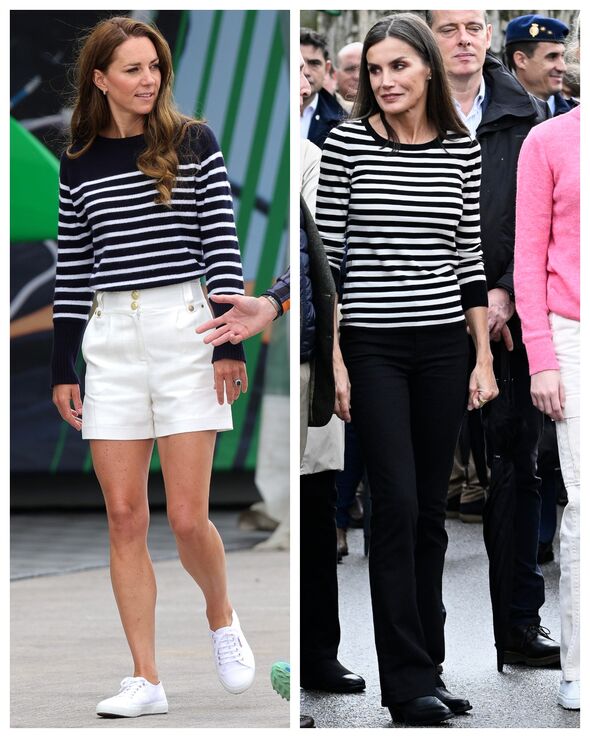 Queen Letizia of Spain was joined by her eldest daughter Princess Leonor and husband King Felipe today as they visited the winner of the Exemplary Town of Asturias Award. The Queen of Spain wore a very casual look, reminiscent of Kate Middleton.

The Spanish Royal Family visited the parish of Cadavéu in Valdés on Saturday to celebrate the Princess of Asturias accolade, which is now in its 33rd year.

It is given to the town or village in Asturias “that has stood out in a notable way in the defence and conservation of its natural, environmental setting, its historical and cultural heritage”.

The awards share their name with Princess Leonor, who is the Princess of Asturias.

Queen Letizia opted for smart casual for today’s outing, in a striped black and white T-shirt and black tailored trousers.

She completed her look with black leather shoes.

The Spanish royal, 50, wore her brunette locks loose for the occasion and kept her make-up natural as she greeted locals and spoke with children in traditional dress.

Her eldest daughter Princess Leonor, 16, was just as stylish as her mother in a bright pink jumper and off-white cargo trousers.

She swept her blonde hair back into a ponytail.

Queen Letizia’s look was very reminiscent of a navy and white striped jumper that Kate, Princess of Wales has worn in the past.

Kate owns the jumper from Erdem, and the brand calls it the “Lotus” jumper. It’s made from cashmere.

The Princess debuted the striped jumper during a visit to the 1851 Trust and GB’s SailGP team in Plymouth on July 31, 2022.

The description on the website says: “Erdem’s navy Lotus sweater is an updated take on the traditional marinière, a striped top originally worn by French sailors and later adopted by 1960s style icons such as Brigitte Bardot and Jane Birkin.

“It’s knitted in Scotland from soft cashmere to a crew-neck silhouette with dropped shoulders and ribbed edges.”

Kate also wore a more white version of the striped cashmere jumper during a visit to St Andrew’s, Scotland in May 2021.

The Breton-style horizontal black stripes helped give it a nautical feel.

The jumper is made in Scotland, which is probably why Kate chose to wear the piece during her visit to the country.

Unfortunately, this version of the jumper which cost £650, is no longer in stock.

I’m 53 and obsessed with tanning, trolls say you can tell because of my skin but I know I look good | The Sun