Independent senator David Pocock has signalled his support for legislating Labor’s 43 per cent emissions reduction target for 2030 despite wanting a more ambitious target, describing it as a “floor, not a ceiling” that should be raised over time.

Tasmanian senators Jacqui Lambie and fellow party member Tammy Tyrell said they were open to backing the Albanese government’s target of reducing emissions by 43 per cent by 2030, too, but the government will still need either the votes of the Greens or the opposition to pass the legislation through the Senate. 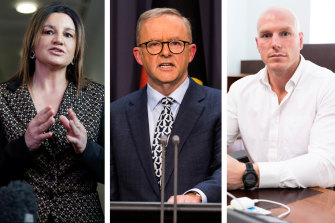 Pocock’s comments will ratchet up pressure on the Greens, in particular, to come to the table after the party in 2009 sided with then-opposition leader Tony Abbott to vote down Kevin Rudd’s carbon pollution reduction scheme, citing its lack of ambition.

Greens leader Adam Bandt has said he is open to talks about the 43 per cent target, which does not have to be legislated.

Appearing on ABC’s Insiders on Sunday morning, Pocock said he has been open in declaring he wants an interim target higher than 43 per cent on the way to net zero.

“But my sense is that what Australians really want is a target to be legislated. We have to actually bank some of these gains and I want to see a target with integrity”.

“There’s some real concerns about the way that we’re actually getting to whatever target we set and that’ll be my focus,” he said.

“Having a target and treating that … as a floor, not a ceiling and then ramping up ambition over time.”

Pocock welcomed the review of Australia’s emissions reductions fund by former chief scientist Ian Chubb as something that will restore integrity to the emission reduction calculations.

“[The fund] has some really serious allegations against it in terms of the quality and the integrity of the carbon credits that have been created under that scheme. We have to ensure that we’re cleaning up all these junk credits.”

He did not outline potential other amendments to the legislation, because it has not been released yet.

The new senator ducked questions about whether he would still support Labor’s 43 per cent target if it allowed new coal mines to be opened, saying Canberrans “want something legislated, we need the big picture policy to actually unlock investments in renewables”.

However, the Australian Energy Market Operator’s Integrated Systems Plan for the National Electricity Market for the next three decades, released last week, suggests the likelihood of any new coal mines being opened is low.

It noted 60 per cent of the eastern seaboard’s coal-fired power plants are expected to shut down by 2030. Under the “step change” scenario modelled, coal-fired power generation would essentially disappear by 2040.

“Announcing that we are back at the table when it comes to climate and environment is really important,” he said.

“This doesn’t make us a leader by any stretch. We’ve got a long way to go. And I think particularly in the Pacific, where climate change is the number one priority for Pacific island nations, we have to be playing our part in the region and in the international community.”

Pocock also said he did not support the proposed federal integrity commission having the power to sack politicians – as North Sydney independent Kylea Tink had suggested to The Guardian – “because it wouldn’t be an elected body” and there were potential constitutional issues. On the contentious issue of how many advisers crossbench MPs are allocated, he said it should be set by an independent body, not the government.