Treasury officials have been asked to prepare a new cost estimate for the stage three tax cuts to sharpen the political debate over federal debt, out of concern the impact of the package will exceed the $243 billion forecast made only months ago.

The new estimate will fuel a growing argument about the fairness of the income tax relief for workers on higher incomes after Prime Minister Anthony Albanese and Treasurer Jim Chalmers left room on Friday to amend the policy to target workers on low and middle incomes. 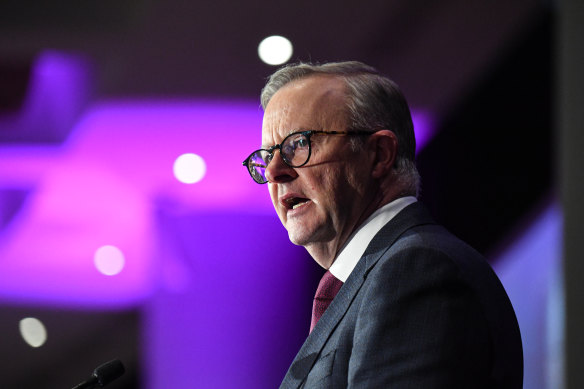 Prime Minister Anthony Albanese has not shut down the case being made by Jim Chalmers to pare back the stage three tax cuts.Credit:Peter Rae

With interest rates rising on $889 billion in Commonwealth debt and no budget surplus expected in the decade ahead, the government is warning that interest payments will increase sharply from $17.9 billion this financial year.

Opposition Leader Peter Dutton accused Labor of getting ready to break an election promise to deliver a package that would mean workers pay no more than 30¢ in the dollar on their earnings between $45,000 and $200,000 a year.

Albanese and Chalmers said the government had not changed its position on the stage three package – the final part of a sweeping plan that began four years ago – but the treasurer emphasised the need to help ordinary households.

“When it comes to the tax cuts, I think we’ve made the obvious point that when it comes to cost-of-living relief, it should be targeted to people on low and middle incomes,” Chalmers said.

The treasurer will fly to Washington, DC, on Tuesday to meet his global counterparts and discuss a downgrade to global growth by the International Monetary Fund, amid concerns at the backlash from financial markets to British tax cuts unveiled on September 23 and abandoned on October 3.

Some in the government regard the financial turmoil in response to the British cuts, which were to be funded by sovereign debt at a time of continued budget deficits, as a significant reason to rethink the stage three cuts.

However, the question has not gone to a full meeting of federal cabinet and there is no decision on whether to amend the package when ministers are concerned at the political danger of breaking the Labor election pledge to deliver the tax package.

The revised costing of the stage three cuts, which are not due to start until July 2024, could shape the debate in the week before the federal budget on October 25.

“The government hasn’t changed our position,” Albanese said of the stage three tax cuts when asked at an event in western Sydney on Friday.

“We’ll continue to get on with making sure that we deliver a budget that is responsible, that acknowledges the pressures that are on it.”

Asked if he was guaranteeing there would be no changes to the tax cuts, Albanese replied by saying, “that is exactly”, before restarting his sentence to say: “What I have said is that the government has not changed our position.”

The more generous element of the package abolishes the 37 per cent marginal tax rate for those earning more than $120,000, so the greatest gains go to those on higher incomes. Every dollar earned over $200,000 will continue to be taxed at the 45 per cent tax rate.

A study by the Australia Institute concluded that half the benefits by dollar value would go to those earning more than $180,000 a year.

The $243 billion cost estimate is from the Parliamentary Budget Office and covers the nine years to June 2033. The estimate was finalised on July 7 in response to a request from Greens leader Adam Bandt, who wants the cuts repealed in full.

Grattan Institute chief Danielle Wood said an updated forecast would show a higher cost because of the increase in employment and higher nominal wages.

“We would expect the package to cost more but at the same time, we would expect income tax revenue to be rising faster than forecast,” she said. “So it would be a bigger cost on a bigger tax base.”

Wood said there were strong economic grounds to scale back the income tax cuts for workers on higher incomes while leaving the benefits for those on low and middle incomes.

Chris Richardson, an independent economist and former director at Deloitte Access Economics, said this week he did not oppose the stage three package on the grounds of fairness but that good economics and good politics meant they should be trimmed rather than scrapped.

Richardson suggested keeping the marginal tax rate for those earning above $120,000 at 37¢ in the dollar – rather than reducing it to 30¢ – in order to cut the annual $21 billion cost of the stage three plan down to about $12 billion.

Expert Reveals All The Ways Queen Elizabeth Is A True Taurus

OK! Loves: The perfect working from home knit for under £50