The following contains massive spoilers from the 10th episode of Manifest’s final season (aka the midseason finale).

When the lyrical savant Taylor Swift crooned “life is emotionally abusive, and time can’t stop me quite like you did” in “Snow on the Beach,” she was probably referring to the first 10 episodes of Manifest‘s fourth and final season, which were released Friday on Netflix.

More specifically, we’re talking about the gut-wrenching final moments of Episode 10, in which Zeke (played by Matt Long) used his empathic powers to absorb Cal’s (Ty Doran) leukemia, thus saving the teenager’s life but sacrificing his own in the process. This also meant that Michaela (Melissa Roxburgh), who began the episode in wedded bliss, was suddenly a widow.

“That was one of our flags in the sand that we knew was coming,” series creator and showrunner Jeff Rake tells TVLine of Zeke’s death.

When Manifest moved to Netflix for Season 4 after being cancelled by NBC, Rake was tasked with compressing the additional three seasons he had planned into the 20 episodes that make up the super-sized farewell run. After some reorganizing, the most important story point for the series boss was that moment at the bottom of the Stones’ staircase in the midseason finale, when Zeke realized that Cal, now dying, was crucial to saving humanity. 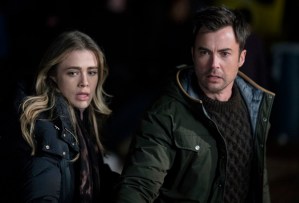 “Zeke made that incredibly selfless, powerful decision, that tragic decision to sacrifice himself,” Rake notes. “That’s how I reached the decision that that would be how we got out of Episode 10.”

Rake broke the news to Matt Long, who plays Zeke, over lunch before they began filming the final season. “I explained to him why it was so important to the series, and he got it.” Rake recalls. “He’s a great sport and gave us an incredible performance.”

Zeke might be dead, but is that truly the end for him and Michaela? According to Rake, the empath’s passing “doesn’t necessarily prevent two lovers like Michaela and Zeke somehow finding a way to communicate with each other.”

But what does this all mean for Jared? At one point, the lawman believed that Michaela was the love of his life, yet he stepped back once she decided to marry Zeke. Plus, he’s currently dating fellow cop Drea. With Zeke now out of the picture, that opens the door for him to rekindle things with his former flame in the back half of Season 4. (A premiere date for Part 2 has not yet been announced.)

When we pick up for the last 10 episodes of the series, a “number of months” will have passed since the events of Episode 10, Rake reveals. “Jared will have been respectful, and then the question raised [is], ‘How much time does one have to wait before moving on?’That will be a question that both Michaela and Jared ask themselves.”

How are you feeling about Zeke’s death in Manifest’s midseason finale? Grade the episode below, and then let us know your thoughts in the comments.

Riverdale season 4: Who is Miss Appleyard? Meet the star behind mystery character