Frog in your throat! Incredible moment three-foot grass snake devours its prey in a Kent marshland is pictured

This is the incredible moment a a three-foot grass snake was pictured ruthlessly devouring a helpless large marsh frog tadpole for its next meal.

The snake was spotted diving into the marshes before rising from the waters with the enormous amphibian which it caught between its fangs.

The doomed marsh frog, which was pictured being devoured at Oare Marshes Nature Reserve in Kent, was initially mistaken for a fish because of the ‘thickness of it’. 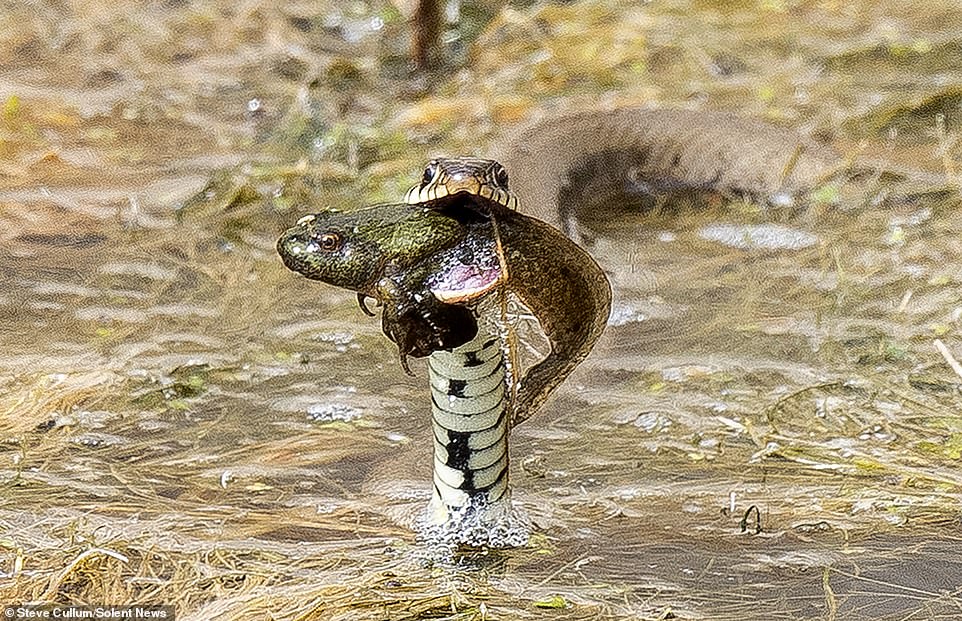 The frog was devoured at Oare Marshes Nature Reserve (pictured) in Kent which is home to thousands of species including the Chinese water deer, Leisler’s bat and the palmate newt 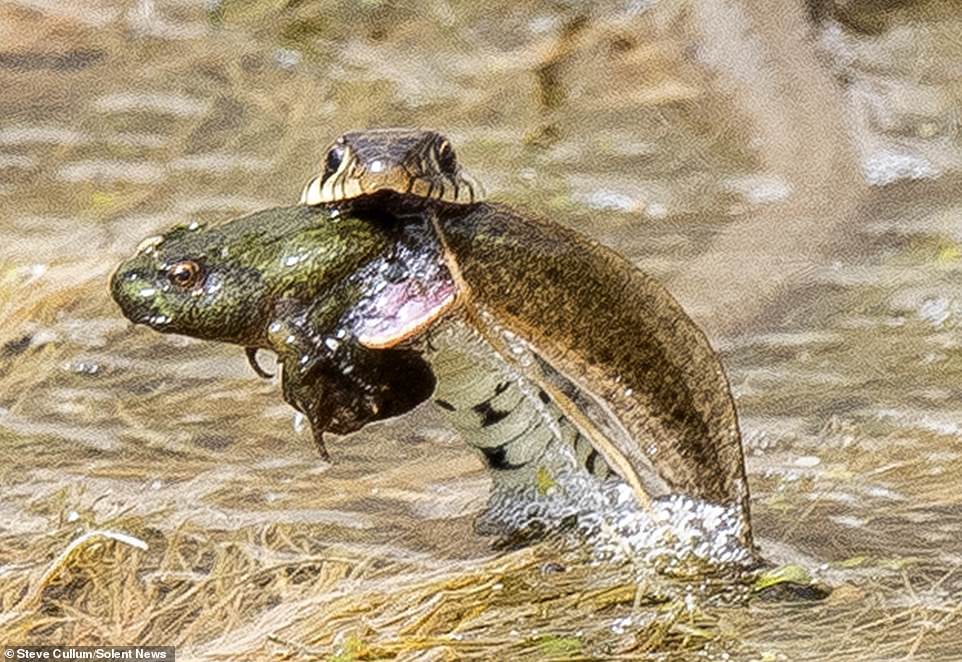 The doomed marsh frog was initially mistaken for a fish by retired gas engineer Steve Cullum, 69, because of the ‘thickness of it’

Although they are not easily spotted, a retired gas engineer was on hand to capture the moment at the perfect point.

Steve Cullum, 69, said: ‘The snakes are generally well hidden but I saw this one dive into the marsh and come up with the large catch.

The photographer from Meopham, Kent, added: ‘We initially thought it was a fish because of the thickness of it but upon closer inspection we noticed it was in fact a marsh frog tadpole’.

The grass snake is the UK’s largest reptile and unlike other reptiles in the area is often found in low lying, damp areas, where ponds are present.

The reptiles, which have an average life span of 15-20 years, typically hunt amphibians, fish, small mammals and birds.

The reptile is protected in the UK under The Wildlife and Countryside Act 1981 Schedule 5.

When under threat, the grass snake will often ‘play dead’ and under some conditions hiss and release a foul-smelling substance.

Grass snakes often live in England and Wales, but are absent from Scotland, Northern Ireland and the Isles of Scilly.

The incredible image shows the moment that the snake opens its mouth wide and its long body can be seen trailing behind in the marshland.

The marshes, which are managed by Kent Wildlife Trust, are home to thousands of species including the Chinese water deer, Leisler’s bat and the palmate newt.

It is also home to an array of other reptiles including the common lizard, smooth snake, sand lizard, slow worm and adder.

The adder, which has an average lifespan of around 15 ears, often has a distinctive dark zigzag pattern along its back and is the UK’s only venomous snake.

Grass snakes are often seen basking in the sun near ponds in the summer months.

The extraordinary reptiles are Britain’s longest snake and can often exceed a three feet in length.

Grass snakes are typically grey and green but have a distinctive yellow and black collar around the neck and black markings along their body.

They are lethal hunters of frogs, toads and other small creatures but will go into hiding immediately at the first sound of humans approaching – and are even known to ‘play dead’.

While the reptiles can strike, they do not bite and are harmless to humans.

Without venom, they have to rely on the element of surprise as they grab their unsuspecting prey, often in swallowing it whole.

The amphibians that grass snakes go after are often still alive when devoured.

They usually have an average life span of around 15-20 years and are protected in the UK under The Wildlife and Countryside Act 1981 Schedule 5.

Although grass snakes can be found in England and Wales, they are absent in Scotland, Northern Ireland and the Isles of Scilly.

I’m fully vaccinated. Is it safe to eat inside restaurants now?