EXCLUSIVE: British tourists complain they are being ‘led like lambs to the slaughter’ by holiday firms sending them to Crete resort hit by vomiting bug, with families stuck in their rooms for days

British holidaymakers say their breaks away to a luxury hotel in Greece have been ruined after they were hit by a sickness bug.

Families complained they have been made to stay in their rooms for days at the plush Maritimo Beach Hotel in Sissi after dozens of holidaymakers felt sick and nauseous with vomiting and diarrhoea.

Staff at the four-star seafront hotel – where ambulances have been arriving to take people to hospital and paramedics have been on site treating those affected – told holidaymakers that the problem has been sweeping through the village for some time.

But travel firms EasyJet and Jet2 have continued to send customers to the hotel weeks after the bug was first detected, they claim.

Among those affected is district nurse Wendy Hampton, 44, from Leigh, Greater Manchester and her family.

She told MailOnline: ‘After working all through Covid we booked a holiday with Jet2. We arrived on Sunday and ate dinner in the restaurant. By Monday morning we were all vomiting.

‘As a nurse I knew it was imperative to isolate. But there is no way of contacting the reception to ask for clean bed linen after it had got sick on it. And I was told to wander into the restaurant to collect food to take back to the room. But that will just cause the bug to spread.’ 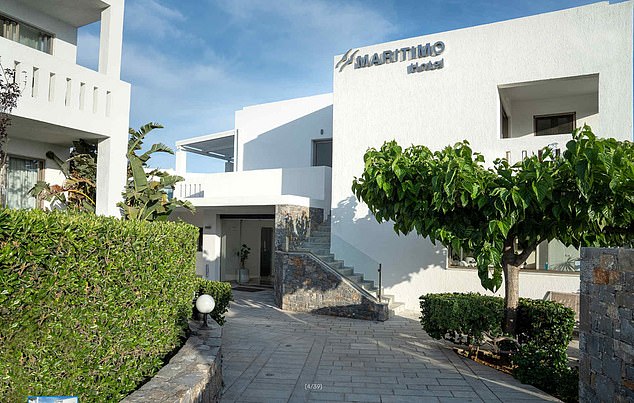 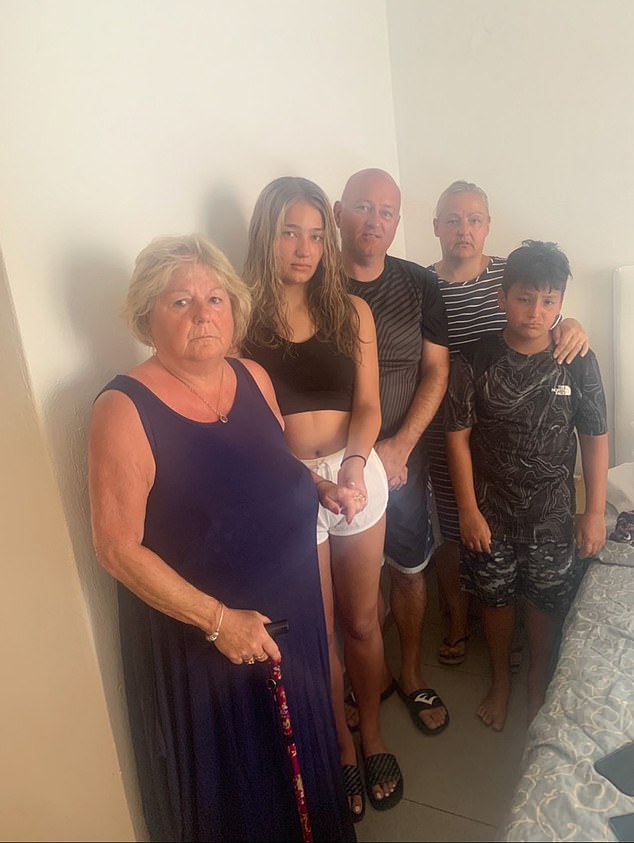 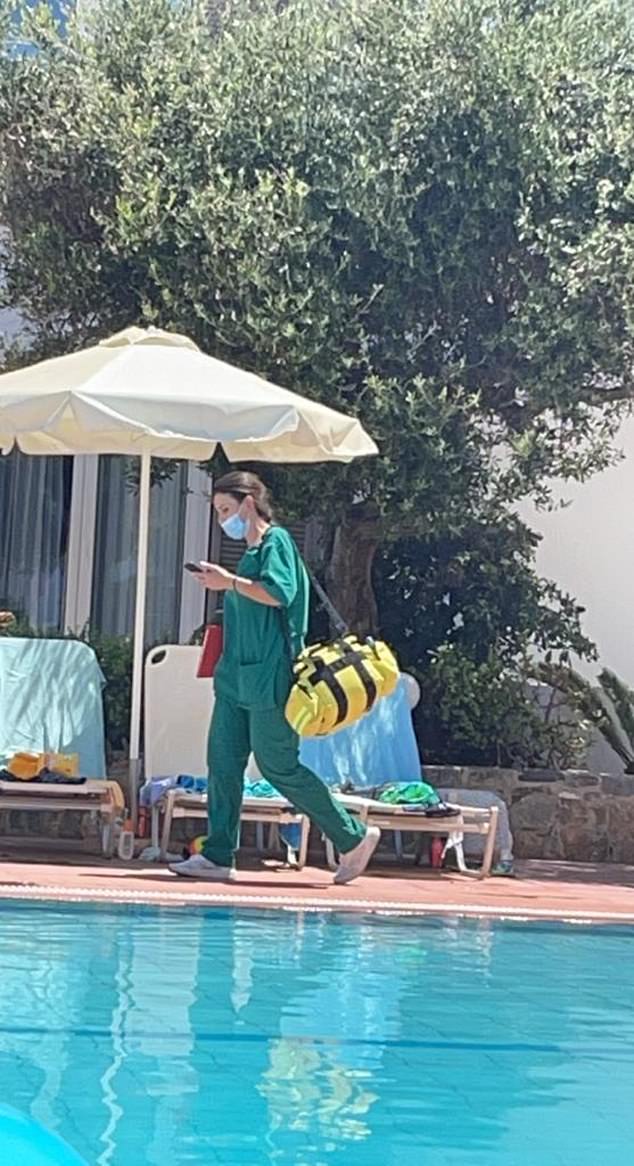 She added: ‘The Jet2 rep at first denied there was a problem but then claimed that the bug was rife in the whole village. I later found out that ambulances had been taking hotel guests to hospital for the past four weeks.’

Clinical psychologist Dr Tamily Duggan told how her 12-year-old daughter became so dehydrated that she was about to be admitted to hospital before starting to recover.

She told MailOnline: ‘Jet2 knew there was a problem at the hotel a good two weeks ago but no one told us about it. We were led like lambs to the slaughter. Like most people, this is our first holiday since before Covid. And to be stuck in your room, or wandering about feeling sick is just awful.

‘I had to call the doctor to see our daughter on the second day because she was so ill. She had vomited 14 times in a couple of hours and could hardly stand.

‘My husband, daughter and I were all ill within 24 hours of arriving at the hotel. We were stuck in the room for two days with no water and no means of contacting reception.

‘When I went down there to report the illness I found a doctor there and seven other families all with the same symptoms.’

Dr Duggan, from Leicester, paid Jet2 £2,900 for a 10-day package of flights and half-board accommodation. 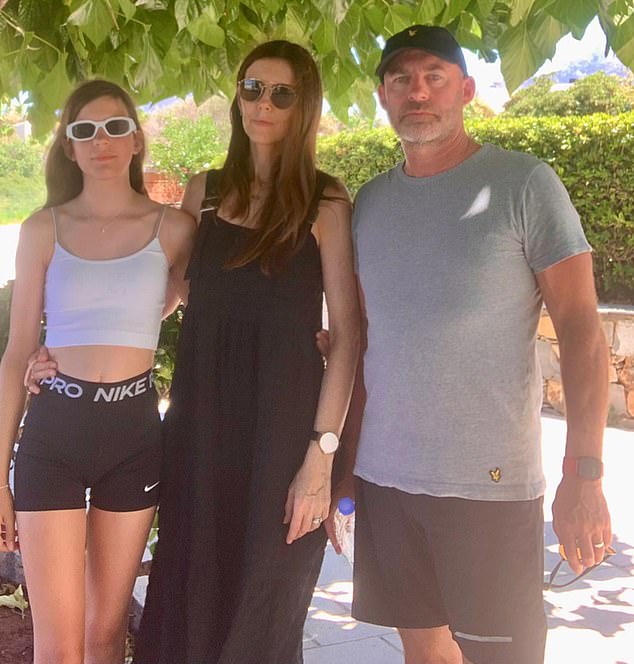 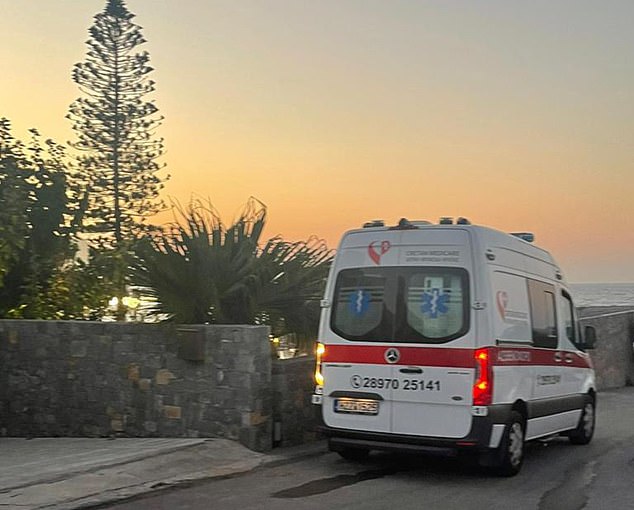 An ambulance is pictured parked up outside the Maritimo Beach Hotel

Mum Mel Lawrence, 46, and her family face a further seven nights of misery at the bug infested hotel after arriving on Saturday for an 11-day package with EasyJet.

She told MailOnline: ‘Within 24 hours we started getting sick and it got worse throughout the evening. My husband Richard and my son Joseph can’t get out of bed they feel so ill.

‘We were all looking forward to a holiday after being stuck at home for two years. But we haven’t been able to do anything or go out and about.

‘What really annoys me is that the hotel and EasyJet knew there was a bug circulating in the hotel but they did nothing to warn anyone about it. Dozens of people have been struck down by it in the short time we have been here. Ambulances have been taking hotel guests to hospital because of it for weeks!’

She told MailOnline: ‘I’ve saved for year for this holiday for my two kids. But everyone around the hotel is getting sick. My son Harry had to be sick in the bin because I was stuck on the toilet.

‘EasyJet have shown no compassion. They knew there was a problem but they didn’t warn anyone about it.’ 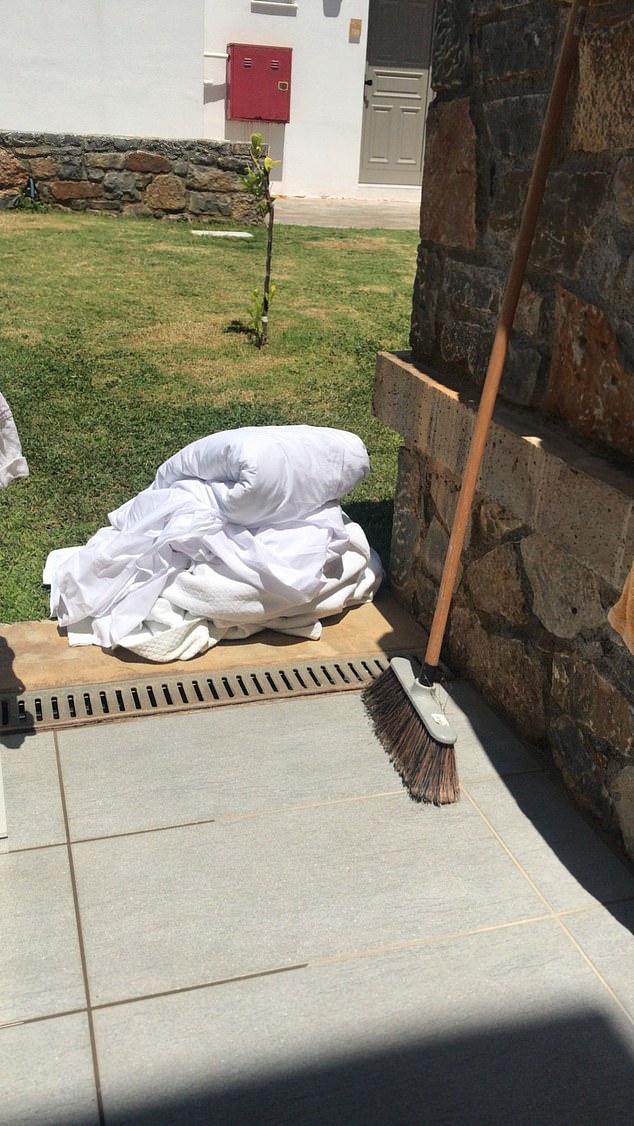 Vomit stained bedding is pictured outside at the Maritimo Beach Hotel 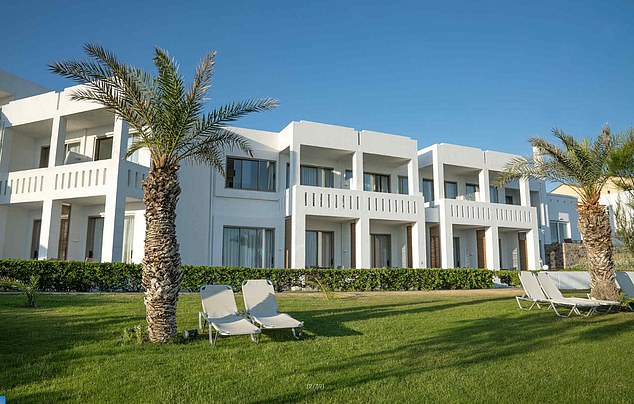 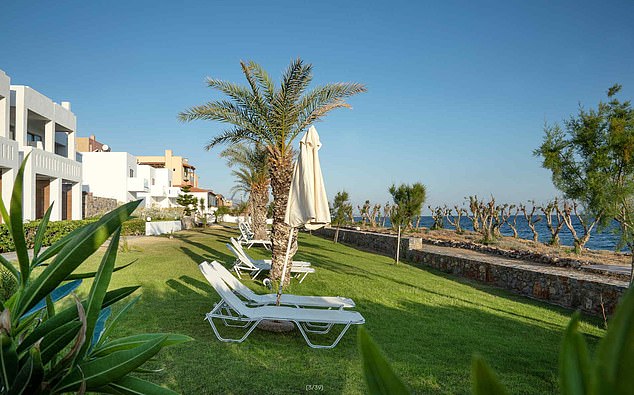 One holidaymaker said: ‘What really annoys me is that the hotel and EasyJet knew there was a bug circulating in the hotel but they did nothing to warn anyone about it’

Amy paid Easyjet £1,500 for flights from Bristol and seven-days half-board accommodation for herself, daughter Willow, 11, and son Harry, 9.

EasyJet today claimed they had only just learnt of the outbreak but declined to discuss whether clients would receive compensation.

Spokeswoman Ruth Bishop said: ‘We are aware of a small number of reports of sickness at the Maritimo Beach Hotel in Crete.

‘Providing safe and enjoyable holidays is our top priority, and our teams are working to gather more details, to investigate these reports.

‘We always work closely with our hotel partners to ensure that health, hygiene and comfort levels are maintained in line with industry standards.’

Jet2 told MailOnline they have tried to limit the spread of the illness.

A Jet2 spokesman said: ‘Like some other tour operators, we have been made aware that some customers at this hotel have felt unwell.

‘Upon learning this, we immediately put several steps in place to limit the spread of any illness, and we have not received notifications of any new cases in the past several days.

‘Our teams have continued to provide support to our customers too. It is important to note that there is nothing to suggest that the cause of illness is anything to do with the hotel.

‘In fact, we have spoken to a tour operator which has reported cases of illness amongst customers travelling from another country and, although unconfirmed, the cause of illness may have been from a customer feeling unwell in an airport in that country.

‘It is likely that the illness is caused by a virus and, as such, the hotel management have implemented additional disinfection procedures to assist in limiting the spread of any virus.’

The management of the Maritimo Beach Hotel declined to comment when contacted by MailOnline.

'Pure evil': Inside the investigation that led to a 650-year sentence for serial rapist